(German Racing Driver Who Competes in Formula One for Aston Martin)

Sebastian Vettel is a German racing driver, currently driving for Aston Martin in Formula One. He has previously driven for Ferrari, Toro Rosso, BMW and Red Bull. A four-time Formula One World Champion, he is one of the only four drivers to win four or more titles. His relentless hunger for victory led him to become the youngest race winner, the youngest to win the World Drivers' Championship, and the youngest double, triple and quadruple world champion in Formula One. Red Bull owner Dietrich Mateschitz described him as a young guy with extraordinary potential. “He is fast, intelligent, and very interested in the technical side." He is often compared to the retired German racing driver Michael Schumacher because of his driving style, his concentration, and the role he plays with his engineers behind the scenes. He has a passion for different helmet designs, and works closely with the designers. In 2012, he celebrated his 50th helmet design. He always nicknames his cars, as he believes that it is important to have a close relationship with a car. He thinks a car should be named after a girl, as it is sexy. Lewis Hamilton
DID WE MISS SOMEONE?
CLICK HERE AND TELL US
WE'LL MAKE SURE
THEY'RE HERE A.S.A.P
Quick Facts

Sebastian Vettel was born on July 3, 1987, in Heppenheim, Germany, to Norbert and Heike Vettel. He has two older sisters—Melanie and Stefanie, and a younger brother, Fabian, who is also a racing driver.

At the age of 4, Vettel started amateur karting, and when he was 8, he began racing in karts series. At eleven, he was taken into the Red Bull Junior Team. He won several junior titles, like Junior Monaco Kart Cup in 2001.

He passed his school leaving exams from Starkenburg Gymnasium. His childhood heroes were Michael Schumacher, Michael Jackson, and Michael Jordan.

Continue Reading Below
Career
In 2003, Sebastian Vettel started racing open-wheel cars, and won the 2004 German Formula BMW Championship with 18 victories from 20 races. At Formula 3 Euro Series in 2005, he was in the fifth position, winning the top rookie honors.
In 2006, when he was just 18, he was promoted to a test driver for Sauber in Formula One. Despite several victories, he couldn’t bag the championship.
He became the youngest Formula One driver to participate in the Grand Prix 2006. In the second testing in 2006 Italian Grand Prix, he set the fastest time in Friday practice sessions.
In 2007, at Formula Renault 3.5 Series, he won at the Nürburgring. He was leading the championship, but was called up to Formula One permanently.

The beginning of 2012, did not prove lucky for Vettel. He got just one win and three pole positions from the first 13 rounds. However, he eventually won four races in a row, and gained a sizeable lead in the title race. He won the 2012 drivers’ championship, and became the third driver to win three successive titles, and the youngest triple champion in F1 history.

His first win of 2013 season was in Malaysia, where he won 13 races, matching Michael Schumacher’s single-season record. He finally landed a fourth consecutive drivers’ crown with three rounds in hand.

However, the year 2014, did not prove lucky for him. He failed to win a race and finished fifth in the standings. Experts felt that he could not adapt his driving style as per the new technical regulations. The Ferrari team was revived, and he replaced Fernando Alonso for 2015. The challenge proved good, as he obtained three Grand Prix wins in the first season.

He started the 2016 season by finishing third in the Australian Grand Prix. At Chinese Grand Prix, he finished the race second. He came third in the Spanish Grand Prix, fourth in Monaco, and second in the Canadian. He finished the season with seven podiums and 212 points.
In 2017, he began his third season with Ferrari with a win in Australia. He also won in Bahrain. However, he could not win in Russia, but extended his lead to 13 points. He maintained his 100% podium success rate in 2017.
He became the fifth man in history to claim 90 F1 podiums. Although he lost in Spain, he won in Monaco. In 2017, Austria saw him claim the podium. His championship lead was reduced to a single point as he finished 7th in Britain. He won in Hungary, which was his 46th overall.

In the 2018 season, Vettel won five races and finished the season as runner-up to Hamilton, who won the World Drivers' Championship for a second consecutive year.

Sebastian Vettel continued to struggle over the next two seasons, and won only one event in 2019, and went winless in 2020. At the end of the 2020 season, he and Ferrari parted ways. In 2021, he signed with Aston Martin,
replacing the Mexican racing driver Sergio Pérez.

He was in a relationship with his childhood friend Hanna Prater. In 2019, the couple got married in a private ceremony. They have three children together.

Sebastian Vettel's estimated his annual income is close to $41 million. 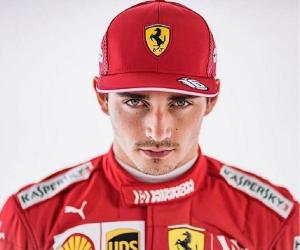