Advanced Search
Niels Henrik Abel was a Norwegian mathematician who discovered the Abelian functions, named after him. He was a brilliant mathematician known for his pioneering works in several fields of the subject. Born as the son of a poor Lutheran minister, he received his early education from his father before attending the Cathedral School. He had the good fortune of having the prominent mathematician, Bernt Michael Holmboe, as his teacher in school. Holmboe recognized the potential in the young Niels and realized that the young boy was truly gifted. Thus the teacher took it upon himself to tutor the boy and encourage his mathematical abilities. However, there were problems galore at the Abel household as his mother was an alcoholic who never took any interest in her children. Also the family struggled in poverty which cast a question mark over Niels’ future. Again Holmboe came to the rescue of his protégé and enabled him to acquire a scholarship for his further education. Abel gained recognition as the most knowledgeable mathematician in Norway by the time he was 20. Within the next few years he made several important discoveries though he never achieved the success he deserved during his lifetime. Unfortunately he died of an illness at the young age of 26 G. H. Hardy
DID WE MISS SOMEONE?
CLICK HERE AND TELL US
WE'LL MAKE SURE
THEY'RE HERE A.S.A.P
Quick Facts

Norwegian People
Leo Scientists
Male Scientists
Norwegian Scientists
Norwegian Mathematicians
Childhood & Early Life
Niels Henrik Abel was born on 5 August 1802 in Nedstrand, Norway. His parents were Søren Georg Abel and Anne Marie Simonsen, and he was the second of their seven children.
His father was a well-educated though poor Lutheran minister who found appointment as a pastor at Gjerstad in 1804 and moved his family there.
His mother hailed from a wealthy family and enjoyed socializing. She was an alcoholic and took little interest in caring for her large family.
His father, a graduate from the University of Copenhagen, educated his children at home using handwritten books. Pastor Abel also worked for the creation of separate Norwegian institutions—particularly a university and a national bank.
In 1815, his father decided to send Niels’ elder brother Hans to the Cathedral School in Christiania (Oslo). However, when the time came for Hans to leave home, Hans became very depressed and hence, his father decided not to send him away. So, instead Niels was sent to the school.
Niels Henrik Abel joined the Cathedral School at the age of 13. Eventually Hans too joined him a year later, and the boys shared rooms and had classes together. Initially Niels was just an average student and his brother performed even badly.
In 1817, the mathematics teacher in his school meted out severe punishment to a student who died shortly after as a result. This led to the dismissal of the teacher and the appointment of a new one in his place.
The new teacher was Bernt Michael Holmboe, a talented mathematician who also served as an assistant to Christoffer Hansteen, professor of astronomy and the leading scientist at the university. Holmboe quickly recognized young Niels’ extraordinary mathematical abilities and began to mentor him.
Holmboe gave Neils special problems and encouraged him to consult books outside the school curriculum. The two, who were just seven years apart in age, began to study mathematics together and studied the works of Euler, Lagrange and Laplace.
Under his teacher’s guidance Neils progressed quickly and by the time he finished school he was familiar with most of the important mathematical literature and was particularly interested in algebraic equation theory.
The budding young mathematician faced a great personal tragedy when his father had public arguments with some famous theologians which effectively ended his career. With his career and future in ruins, his father started drinking heavily in 1818 and died only two years later in 1820 leaving the family in dire financial crisis. The family situation cast a question mark upon Niels’ studies.
Holmboe helped Niels acquire a scholarship so that he could remain at the school. The teacher also talked to his friends about his ward’s talents and raised money to enable him to study at the Royal Frederick University.
By the time Neils Henrik Abel joined the university in 1821, he had already gained a reputation as a highly knowledgeable mathematician in Norway. Around this time he was working on the quintic equation in radicals. He graduated in 1822. 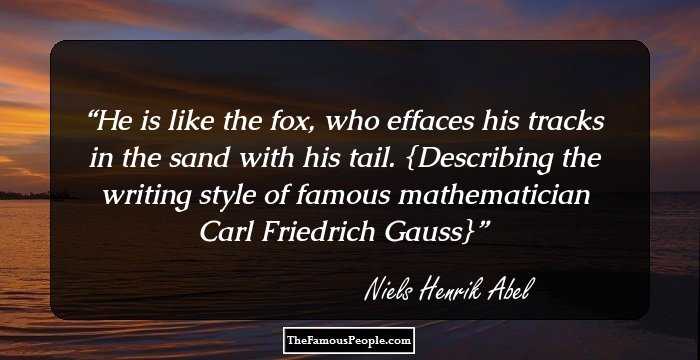 Quotes: Like
Career
His first article was published in "Magazin for Naturvidenskaberne", Norway’s first scientific journal, in 1823. He soon wrote several other articles, but the journal believed that his articles were beyond the comprehension of the common man.
The same year, he received a gift of 100 speciedaler from Professor Rasmussen so that could travel to Copenhagen and visit Ferdinand Degen and other mathematicians there. There he did some work on Fermat’s Last Theorem.
Over the next few years he travelled a lot and met fellow mathematicians living in different parts of Europe. It was during this time that he discovered the Abelian functions, and formulated many of his theorems and formulae. 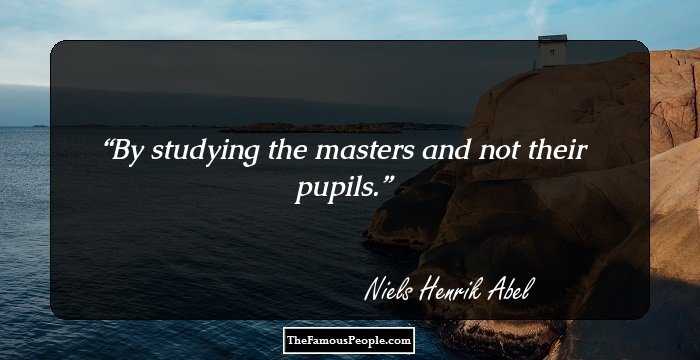 Major Work
In spite of dying at the young age of 26, Niels Henrik Abel greatly enriched the field of mathematics with his findings and discoveries. Several theorems and equations are named in the honor of this great mathematician including Abel's binomial theorem, Abel equation of the first kind, Abel's irreducibility theorem, and Abel's theorem.
Personal Life & Legacy
Niels Henrik Abel lived a tragically short life. His early life was fraught with familial problems and financial difficulties, and in spite of all the challenges he faced, he emerged as one of the brightest mathematicians of his era.
He died of tuberculosis on 6 April 1829, at the age of just 26. At the time of his death he was engaged to Christine Kemp and had a new job as a professor at the University of Berlin waiting for him.