Matthew Calbraith Perry was an American naval officer who served as the commander of the East India Squadron from November 1852 to September 1854. He took part in several battles and was instrumental in Japan ending its isolationist policies by signing the Convention of Kanagawa in 1854. A native of Rhode Island, Perry joined the US Navy as a midshipman on USS Revenge. During his over four-decade-long service, he took part in Little Belt Affair War, Second Barbary War, Suppression of the Slave Trade, and the Mexican–American War and gradually rose through the ranks to become a commodore. He visited Japan twice, in 1853 and 1854, and compelled the Japanese Empire to sign trade and diplomatic treaties with the west, which effectively ended its more than two-century-long isolation. Keen on providing education to naval officers, he helped in the creation of the curriculum at the United States Naval Academy. When steam engine ships were introduced, he realised the importance of modernizing the US Navy and has come to be regarded as the “Father of the Steam Navy” in US. Commodore Perry’s flag was taken from Annapolis to Tokyo to showcase at surrender ceremonies which officially concluded World War II. David Petraeus
Military Leaders #160
Leaders #620
Continue Reading Below
10th April In History
DID WE MISS SOMEONE?
CLICK HERE AND TELL US
WE'LL MAKE SURE
THEY'RE HERE A.S.A.P
Quick Facts

Famous Beautiful Women With Green Eyes
Service in the US Navy
In 1809, when he was 15 years old, Matthew C. Perry obtained a midshipman's warrant in the US Navy. His first assignment was on USS Revenge, with his elder brother, Oliver Hazard Perry, as his commander. He subsequently served on several ships, including USS President, on which he performed the duties of an aide to Commodore John Rodgers.
In May 1811, as part of the crew of USS President, he saw combat for the first time in his career in the Little Belt Affair, named after the British warship that USS President successfully engaged. He kept serving aboard President as the War of 1812 broke out between US and the British Empire.
He took part in President’s engagement with HMS Belvidera. Rodgers shot the first cannonball of the war. However, Perry, along with Rodgers and several others, was injured after a cannon exploded. He was later assigned to USS United States and spent the rest of the war confined to a port at New London, Connecticut.
After the war concluded with the Treaty of Ghent, Perry spent the next few years assigned to various ships. At the advent of the Second Barbary War or the U.S.–Algerian war, he worked under Commodore William Bainbridge.
Between 1819 and 1820, he was assigned aboard USS Cyane which was roaming on the African waters at the time. He was then ordered to go to the West Indies and deal with the pirate activities there.
Between 1821 and 1825, he served as the commander of USS Shark. In March 1822, he travelled on Shark to the island of Key West and placed a US flag on the island soil, physically declaring it to be a US territory.
He christened Cayo Hueso "Thompson's Island" for the Secretary of the Navy Smith Thompson and the harbour "Port Rodgers" for the president of the Board of Navy Commissioners. However, neither of these names lasted long.
Between 1826 and 1827, Perry served as a fleet captain under Commodore Rodgers. In 1828, he came back to Charleston, South Carolina, for shore duty. In 1830, he assumed the command of USS Concord.
From 1833 to 1837, he was the second officer of the New York Navy Yard (later the Brooklyn Navy Yard). At the end of the tour, he was promoted to the rank of captain.
Continue Reading Below
Perry understood the necessity of educating the naval officers and backed the concept of an apprentice system to train new seamen. He also supported the creation of the curriculum of the United States Naval Academy.
He was an ardent advocate of modernising the navy. After receiving commission as a captain, he supervised the building of the navy's second steam frigate USS Fulton, and when it was finished, he assumed its command.
In June 1840, he was granted the title of commodore after he became the commandant of New York Navy Yard. In 1843, he was put in charge of the African Squadron, which was assigned to stop the slave trade under the Webster-Ashburton Treaty. He continued to do so until 1845 when the Mexican-American War broke out.
In the initial days of the Mexican-American War, he served as second-in-command under Commodore David Conner and as captain of USS Mississippi. Perry led a successful invasion of the city of Frontera, lost to Colonel Juan Bautista Traconis in San Juan Bautista in the First Battle of Tabasco, and participated in the capture of Tampico in November 1846.
After his return to US, he substituted Commodore Conner as the head of the home squadron. During the siege of Veracruz, he came back to the fleet.
After Veracruz fell, Perry led his forces towards the remaining Mexican port cities. In July 1847, he captured the city of San Juan Bautista (present-day Villahermosa).
The Japanese Expeditions
In March 1852, Perry received orders from the US President Millard Fillmore to force the Japanese government to set up diplomatic relations with America. Perry subsequently scrutinized the situation and decided that the only way to move Japan away from its traditional isolationist policy was to showcase a superior military force and reach out to the Japanese officials with a “resolute attitude”.
On July 8, 1853, he reached the fortified harbour of Uraga with two frigates and two sailing vessels. Proclaiming himself an admiral, he ignored the Japanese instruction to leave and demanded that the Japanese administration should send an appropriate official to receive the documents he was carrying. If they refused, he warned, he would deliver them by force.
The Japanese knew that they were inadequately equipped to deal with him, so they eventually agreed to receive the documents containing Fillmore’s request for a treaty.
He returned to Japan in February 1854 with nine ships and docked in Edo (modern-day Tokyo) and negotiated the Treaty of Kanagawa on behalf of the US President.
The pact secured better treatment of shipwrecked seamen, allowed US ships to get fuel and supplies at two minor ports, received permission for a US consul to live at Shimoda, and cleared the way for further US trading privileges. From then on, he was regarded as an authority on the Far East.
Family & Personal Life
In 1816, Perry exchanged wedding vows with Jane Slidell. Together, they had seven daughters, Jane Slidell Perry (1817–1880), Sarah Perry (1818–1905), Jane Hazard Perry (1819–1881), Susan Murgatroyde Perry (1825–1896), Caroline Slidell Perry Belmont (1829–1892), Isabella Bolton Perry (1834–1912), and Anna Rodgers Perry (838–1839), and three sons, Matthew Calbraith Perry (1821–1873), Oliver Hazard Perry (1825–1870), and William Frederick Perry (1828–1884).
Later Years & Death
In the final years of his life, Perry worked on his account of the Japanese expeditions. He was still part of the navy.
Two days after his detachment from his last post, he passed away on March 4, 1858, in New York City, due to rheumatic fever that found its way to his heart, worsened by complications of gout and alcoholism. He was 63 years old at the time.
He was initially buried in the cemetery of St. Mark's Church in-the-Bowery. On March 21, 1866, he was reinterred in the Island Cemetery in Newport, Rhode Island.
You May Like

See the events in life of Matthew C. Perry in Chronological Order 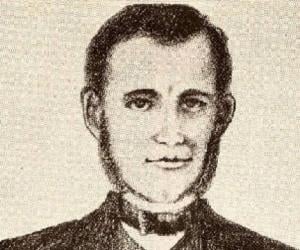