Advanced Search
Martin Van Buren was an illustrious lawyer and a brilliant politician, who became the eighth President of the United States of America. He along with some of his colleagues put together the Democratic Party, which changed the very way in which American politics had been run till then. Buren was a man of impeccable character and shrewd political skill, though he came from a humble background. In order to carve a niche for himself in politics, he garnered the support of powerful and influential New Yorkers, who had big stake in the territory’s administration. Buren was the first American president of Dutch descent and also the first to be born as the citizen of United States, free from the British colonial rule. He also holds the distinction of being the first president elected from New York. Buren tried his best to manage the fragile economic condition of the country but his presidential term was plagued by the Panic of 1837. His political opponents pinned its blame on him and named him "Martin Van Ruin". Take an in depth look at the life of this charming statesman, who today is remembered as the man who laid the cornerstone of the American political system. Cause of Death: Bronchial Asthma

American People
American Men
Male Leaders
American Leaders
Sagittarius Leaders
Childhood & Early Life
Martin Van Buren was born in Kinderhook, New York. His father, named Abraham, was a man of limited means, a farmer and tavern owner, who supported American Revolution.
Listening to various political get-togethers at his father’s tavern, he developed a sharp political acumen.
He received his elementary education in his small village school and then transferred to the Kinderhook Academy, where he studied Latin before attending the Washington Seminary in Claverack.
By the time he turned 14, his father could no longer afford his college tuition fee and therefore Martin began working at the office of Francis Sylvester. In 1803, his hard work paid off, when he received admission to the bar. 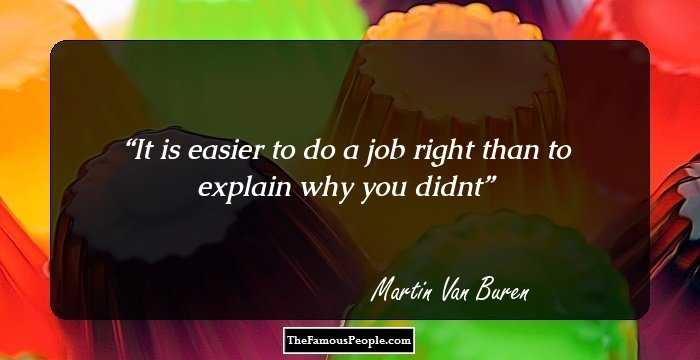 Quotes: You
Continue Reading Below
Career
He joined active politics since he was 17 years old, however he got his major breakthrough in 1812, when he became a member of the New York State Senate.
Later in 1815, he was appointed as the attorney general of New York. These posts allowed him to hone his political skills and he proved himself as serious political leader.
While serving his second term as the New York Senator, he lost his wife; despite this personal setback he did not relent in pursuing his political ambitions and was elected as a United States Senator in 1821.
After the presidential elections of 1824, he along with some other key members of Democratic-Republican Party, like Andrew Jackson, William Crawford and John Calhoun formed an alternate party.
He was elected as the governor of New York, in 1828; therefore, he resigned from his Senate post.
In 1829, after becoming the President of the United States Andrew Jackson, appointed him as his Secretary of State.
His tenure as the Secretary of State lasted only till the end of the first presidential term as he had to resign on April 1831, due to the Petticoat affair. However, he continued to be part of Jackson’s Kitchen Cabinet.
Later in August 1831, Jackson rewarded his loyalty and grace while handling the Petticoat affair by appointing him as the minister to the Great Britain.
While running for the second term as president, in 1832, Jackson chose him as his running mate and the duo easily won the elections.
Continue Reading Below
By the end of Jackson’s second term in 1835, the Democratic Party members unanimously nominated Van Buren for presidential post.
In 1836 presidential elections, he quite easily won the popular vote and defeated his three Whig Party, opponents
In March 1837, he became the eighth President of the United States and immediately found himself surrounded by various challenges, as the first great depression had paralyzed the U.S. economy.
To improve the economic slowdown, he suggested that the federal funds should be held in an independent treasury, this happened but many years later; meanwhile his detractors made him an easy scapegoat for the crises.
On August 5, 1837 he declared his opposition towards the annexation of Texas; this enraged the expansionists against him.
He did not take any concrete action against the British, on whose instigation the Canadian rebels had seized Caroline (American ship) in January 1838. An American was killed in the skirmish.
In August 1839, a mutinous slave ship, named the Amistad was caught on American shores and he sided with the Spanish government as he agreed that the slaves were Spain’s property, most saw this as pro slavery gesture.
In November, 1840, he ran for the second presidential term but was defeated by the Whig Party candidate, William Henry Harrison.
In 1844, Van Bur believed that he might once again win a presidential nomination from the Democratic Party but instead James K. Polk was nominated.
Continue Reading Below
In 1848, he was nominated by the Free Soil Party as their presidential candidate but he managed to get 10 percent of the popular vote and retired to his home in Kinderhook.
Personal Life & Legacy
He was married to Hannah Hoes, who was his first cousin and childhood sweetheart. They had four sons and one daughter.
On February 5, 1819, Hannah Van Buren passed away after 12 years of marriage due to tuberculosis. She was 35 years old at the time of her death.
Martin Van Buren passed away at the age of 79 due to bronchial asthma and heart failure, at his Lindenwald estate in Kinderhook. His body was interred at the Kinderhook Cemetery.
Van Buren County, Michigan is named after him. The county was so named in 1829 when Van Buren was Secretary of State. It was done in the hope of winning support in Preseident Andrew Jackson's administration for Michigan's bid to become a state.
In 1938, the United States postal service issued an eight cent postage stamp dedicated to Martin Van Buren.
Trivia
He became the first U.S. President, who was born as an American citizen.
He grew up in a Dutch community of Kinderhook and growing up spoke Dutch as his first language rather than English.
He paved the foundation of a new party based on the agenda of minimalist government, this group later evolved as the Democratic Party.
Several nick names stuck to him throughout his political career, including The Careful Dutchman, The Enchanter, The Red Fox of Kinderhook, The Great Manager, Martin Van Ruin, The Mistletoe Politician, and Little Matt etc.