The American architect Louis Sullivan is referred to as the "father of skyscrapers". He attended the Massachusetts Institute of Technology and the Beaux-Arts in Paris. His career reached its zenith during his partnership with Dankman Adler. At first, the partners designed many theatres, the most famous example of their work being the Auditorium Building in Chicago. The Wainwright Tomb, the mausoleum designed by Sullivan is regarded as a masterpiece. These buildings came at a time when steel was used to give strength to buildings, unlike before when the buildings were constructed with very thick “load-bearing” walls. Sullivan adapted by creating high-rises very different from the ones that were being constructed along historical styles. He emphasized the height, keeping in mind the purpose of the construction. He believed in the Roman architect, Marcus Vitruvius Pollio’s credo "form ever follows function", stressing on use rather than utility. But, he also used ornamentations as seen in the Carson Pirie Scott store, and the semi-circular arch was his favorite feature. His design of the polychrome modern Transportation Building earned him accolades for originality. After his partnership with Adler broke, he did not do well. He became erratic, undependable, impersonal, and an alcoholic. He became an inspiration for other Chicago architects such as Frank Lloyd Wright, Richard Nickel and Crombie Taylor. 151
Architects #22
Architects #22
3rd September In History
DID WE MISS SOMEONE?
CLICK HERE AND TELL US
WE'LL MAKE SURE
THEY'RE HERE A.S.A.P
Quick Facts

American Celebrities
Male Architects
American Architects
Virgo Men
Childhood & Early Life
Louis Henry Sullivan was born on September 3, 1856 to Patrick Sullivan and Andrienne List. His parents had immigrated to America in the late 1840s from Ireland and Switzerland respectively. He had an older brother, Albert Walter.
Sullivan studied in public schools in Boston, and spent considerable time on his grandparents’ farm in South Reading. When his parents transferred to Chicago in 1869, he preferred to remain with his grandparents.
In 1872, he joined the Massachusetts Institute of Technology (MIT). He, however, left after his first year, planning to either study at the École des Beaux-Arts in Paris or be an architect’s apprentice.
Following the suggestion of Richard Morris Hunt, a successful architect, he worked with the Philadelphia firm of Furness and Hewitt. In 1873, he was employed by architect, William Le Baron Jenney in Chicago.
In 1874, he got enrolled at Beaux-Arts in Paris, but was irregular in his studies. He remained in Paris for a year and was an apprentice to the architect Émile Vaudremer. 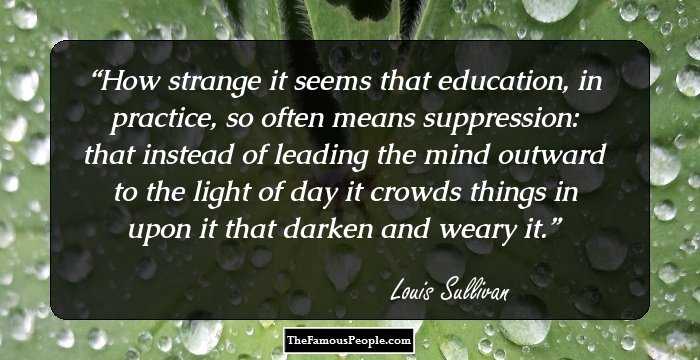 Who Is The Most Popular BTS Member?
Career
Returning to Chicago in 1875, Sullivan became a draftsman with Joseph S. Johnston & John Edelman. He designed the interior decorative "fresco secco" stencils (stencil applied on dry plaster) of the Moody Tabernacle.
In 1879, he joined Dankmar Adler as his employee, and soon became a partner in his firm. They became famous as experts in theatre architecture, first. Their designs found favor in Colorado and Washington.
The company’s theatre architecture phase ended with the 1889 Auditorium Building in Chicago, which consisted of a 4,200-seat theater, a hotel, an office building crowned by a 17-story tower, and commercial storefronts.
In the 1890s, the partners designed The Schiller Building, the Chicago Stock Exchange Building, the Guaranty or Prudential Building, New York, and the Carson Pirie Scott Department Store, Chicago.
His masterpiece, the Wainwright Tomb, a mausoleum in Bellefontaine Cemetery in St. Louis, constructed for Charlotte Dickson Wainwright in 1892, was listed on the National Register of Historic Places, and became a St. Louis Landmark.
In 1893, Sullivan designed the polychrome modern Transportation Building, for the White City", the World's Columbian Exposition in Chicago. Its multicolored façade and the huge, arched Golden Doors were marked deviations from the existing style.
When business declined owing to the Panic of 1893, a serious economic depression in America, the two partners broke up. Sullivan faced severe financial problems, compounded by his alcoholism and unfriendly behavior.
During his latter career, his most noteworthy projects were seven banks in many small Midwestern towns, beginning with the National Farmers’ (now Security) Bank in Owatonna, Minnesota.
The Merchants’ National Bank in Grinnell, Iowa, completed in1914, has a relatively serious form, with intricate ornament. His last project was the facade for the Krause Music Store in Chicago, eight years later.
In 1924, his autobiographical work, ‘The Autobiography of an Idea’, describing his childhood, and early career, and 19 plates for A System of Architectural Ornament According with a Philosophy of Man’s Powers, were published.
Major Works
One of the earliest skyscrapers in the world, the 10-storeyed Wainwright Building, in St. Louis, designed by Sullivan, soared vertically from ground to cornice. It is one of "10 Buildings That Changed America".
The classic Carson, Pirie, Scott and Company Building (the Sullivan Center), in Chicago had a corner visible from two avenues, designed by him. The ornamentation above the entrance was a distinct feature.
Awards
In 1844, Louis Sullivan was posthumously awarded the AIA Gold Medal by the American Institute of Architects in acknowledgment of his of enduring contribution to the theory and practice of architecture.
Personal Life & Legacy
In 1899, he married Mary Azona Hattabaugh, known as Margaret, a 27-year-old divorcee, fifteen years younger than him. She left him 10 years later - the couple was childless.
Trivia
At the time of its publication, some people felt that Henry Cameron, the main character in "The Fountainhead," Ayn Rand's novel, was inspired by this American architect.
According to this architect, "All practical demands of utility should be paramount as basis of planning and design; ...no architectural dictum, or tradition, or superstition, or habit should stand in the way."
You May Like

See the events in life of Louis Sullivan in Chronological Order