Daniel Hudson Burnham was a famous American architect who designed and planned many important buildings and cities in the United States. He was born in New York City into a religious family and was raised in Chicago. After finishing his school he faced a tough time getting admission into a university because of which, he became an apprentice at an architectural firm of William Le Baron Jenny, who was considered as the ‘father of skyscrapers’ at that time. With time, Burnham changed his architect firm and met with his future partner John Wellborn Root there. Both Root and Burnham started their own architect firm and were considered to be aces of their game. Burnham was a creative visionary and Root was more grounded and practical in his approach. But after the premature death of Root, Burnham formed a company called D.H. Burnham & Company and started the biggest project of his career called the ‘World’s Columbian Exposition’ in Chicago. He created a ‘White City’ there, which is still considered to be a work of genius. His work was recognized by Harvard and Yale universities and he received honorary degrees from them.
Continue Reading Below 90
Architects #25
Architects #25
4th September In History
DID WE MISS SOMEONE?
CLICK HERE AND TELL US
WE'LL MAKE SURE
THEY'RE HERE A.S.A.P
Quick Facts

American Celebrities
American Architects
Virgo Men
Childhood & Early Life
Daniel Burnham was born on 4 September 1846 in Henderson, New York City. His family moved to Chicago, Illinois when he was very young. He was brought up in a religious environment.
He did his schooling from a public school in Chicago but he could not get admission in a university and repeatedly failed his admissions tests for Harvard and Yale. This led him to choose politics as a career for himself.
His ‘politics’ stint did not work out for him and he did an apprenticeship as a draftsman at the architecture firm of William Le Baron Jenny. 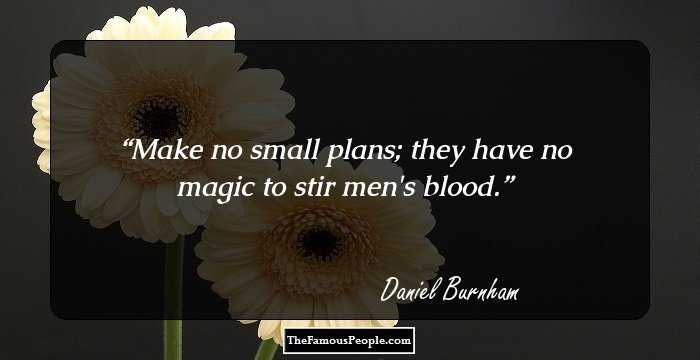 The Hottest Male Celebrities With The Best Abs
Career
In 1872, Burnham started to work as a draftsman at the firm of Carter, Drake and Wight and within a year, he started a partnership with his co-worker John Wellborn Root. The partnership was a profitable one.
Both Burnham and Root complimented each other as Burnham was a visionary and designer and Root was a brilliant draftsman and a physics genius. They both got their first project from John Sherman to construct his Prairie Avenue house.
From 1873-81, after the Great Chicago Fire, both Root and Burnham took up the magnanimous task to rebuild the whole city from scratch, the firm designed more than 165 private houses and 75 public and private buildings.
All the buildings that Root and Burnham built had European touch to it. Eventually the firm adapted to new age techniques and constructed buildings like ‘The Rookery’, the ‘Reliance Building’, the ‘Monadnock’ building, etc.
In 1893, after the death of Root, Burnham took up the role to serve as the chief of construction and chief of consulting architect for the World’s Columbian Exposition, Chicago. It was the most famous work of his life.
Burnham constructed the ‘White City’ for the Columbian Exposition along with many architecture firms from all over the eastern United States. It has buildings, landscapes, boulevards, gardens and classical structures.
Around the same time, he was awarded an honorary degree from Harvard and Yale for his brilliant work for the World’s Columbian Exposition in Chicago. He was also elected as the president of the American Institute of Architects.
In 1900s, Burnham was hired by the U.S. Philippine Commission to design cities of Baguio and Manila. He designed the Flatiron Building, New York, around the same time and did planning for the Beaux-Arts Union Station, Washington.
In 1909, Burnham planned to make Chicago into a beautiful city. After the great success of the ‘White City’, he ignored all the practical aspects of planning a city and kept focusing on the visual features. Around 300 million US dollars were put into it.
Continue Reading Below
According to his plan there would be a lakefront and river and every resident of the city will be within a walking distance of a park. An island was eventually built within the city which provides for natural conservation and a beautiful sight.
In 1912, Burnham’s company became the world’s largest architecture company and a model for many other rising architecture firms in America. He was named by President Taft to be the Chairman of the Committee on the Fine Arts.
Personal Life & Legacy
Burnham married Margaret Sherman in 1876. She was the daughter of a wealthy stockyard executive. They had a long marriage and produced three sons and two daughters.
In 1912, Burnham died in Heidelberg, Germany. He was survived by his two sons - Hubert and Daniel Jr. His sons succeeded him and named the company as ‘Burnham Brothers’ and they donated most of his drawings.
The original drawings and records of Burnham’s work that was donated by his sons after his death to the Art Institute of Chicago eventually made for the Burnham Library, which has one of the vast collections of architectural information in the world.
America has paid tribute to Burnham in the form of Burnham Park, Daniel Burnham Court in Chicago, Burnham Park in Baguio City, Daniel Burnham Court in San Francisco, etc.
Trivia
Burnham’s partner Root died at an early age of pneumonia in 1891.
Louis Sullivan, the greatest architect of the Chicago School used to dislike Burnham’s taste and work and used to call it ‘feudal’ and ‘imperial’. He was of the view that it was setting the modern architecture 50 years back.
He had sent his sons to study architecture in Paris’ Ecole des Beaux-Arts to learn the classical techniques in architecture since he was himself influenced by the architecture and aesthetics of Rome and Greece.
You May Like

See the events in life of Daniel Burnham in Chronological Order