Leon Battista Alberti was the quintessential ‘Renaissance Man’ considering his expertise in architecture, literature, humanism, the languages, painting and related arts. Alberti’s father belonged to a wealthy family in Florence and although he grew up in Genoa for a variety of reasons, he received a first class humanist education at a boarding school. Alberti did not study the arts formally as he studied law when he went to university, albeit against his wishes, but when he graduated he did not pursue a legal career but instead took up a job in the Papal Chancery. Alberti rose to great prominence as he went on to become the architectural advisor to Pope Nicholas V and oversaw the construction and redesign of plenty of famous monuments and churches across Italy. Although Alberti wasn’t an established painter, he wrote a book titled ‘On Painting’ that looked at the work of some of the best known artists and this was regarded as his seminal work and according to Giorgio Vasari, ‘He spent his time finding out about the world and studying the proportion of antiquities’. He also wrote a book on grammar in Tuscan that was published a few centuries after his death.
Continue Reading Below Italian People
Architects
Philosophers
Renaissance Painters
Italian Men
Childhood & Early Life
Leon Battista Alberti was born on 14 February 1404, in Genoa, Italy. His father Lorenzo Alberti belonged to a rich and patrician family in Florence, who were engaged in merchant banking. The name of his mother is unknown but according to most historians he was born out of wedlock.
Albert’s father had been driven out of his own home in Florence by a corrupt government and it was from his father that he received his early education in mathematics. Mathematics continued to be a lifelong passion for him. He was sent off to a boarding school in Padua, Italy, when he was 10 where he received a humanistic education.
Although he reveled in literary pursuits, he decided to study law at the University of Bologna. He received his degree in the year 1428 and instead of practicing law he took up the job of a secretary. 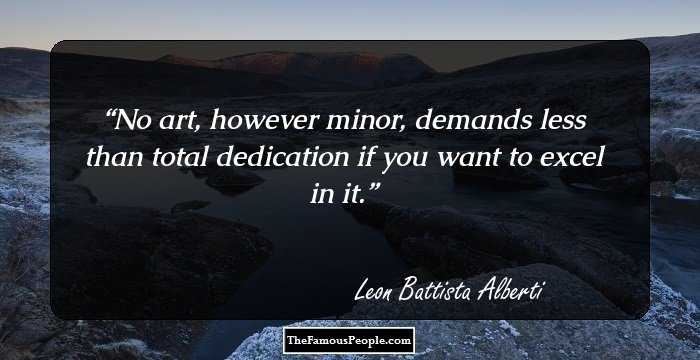 Quotes: You, Art
Continue Reading Below
You May Like

The Sexiest Men Of 2020, Ranked
Career
In 1432, Leon Battista Alberti became a secretary at the Papal Chancery located in Rome and in the same year he started working on the treatise titled ‘On the Family’ that dealt with philosophy. He was also commissioned by an influential patron to rewrite into Latin the lives of the saints.
His first major breakthrough as a writer of repute came in the form of the book ‘Della Pittura’ (On Painting) which dealt with the analysis of the painting of the artists in Florence at the time. Three years later he took active interest in architecture at the behest of Marquis of Ferrera, for whom he completed his first work.
In 1446, he helped build the facade at a palace in Florence, which proved to be his first major commission in architecture. Four years later he went on to redesign a church in Rimini named Tempio Malatestiano. He also worked on the Santa Maria Novella church located in Florence and the designing of Piazzo Po II located in Pienza.
When Nicholas V became the Pope he appointed Leon Battista Alberti as the architectural advisor in the year 1447 and the partnership yielded some of the grandest buildings in the era known as Renaissance Rome. Some of the most important projects undertaken during his time as architectural advisor include the redesigning of Vatican Palace as well as the St. Peter’s.
In 1452, Alberti published the book ‘De re aedificatoria’ (Ten Books on Architecture) that was the result of a deep study of the ancient architectural practices and also the ruins that lay at different parts in Italy. The book was published 33 years later and remains one of the most well-known studies on architecture of the period. Alberti also wrote a book in Tuscan dialect during this time and although the book was published several centuries later; his arguments on society, education and wealth reveal the depth of his thought process.
The Basilica of Sant’ Andrea located in Mantua was his last commission and the project was completed after he had passed away. However, it is important to note that he had drawn up the plans and the whole project was completed according to his specifications. 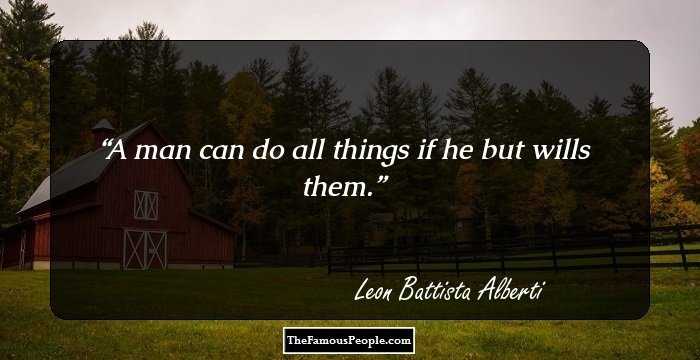 Major Works
He was known as a linguist and an architect of great repute during his lifetime and contributed greatly towards both endeavours in life. Among the many architectural commissions that he completed, the construction of a facade at the Basilica of Santa Maria Novella is definitely one of his most important works as an architect. In his career as a writer, the treatise ‘On Painting’ is one of his major works.
Awards & Achievements
He was never given any formal award but being appointed as the architectural advisor to Pope Nicholas V was certainly a great achievement for him.
Personal Life & Legacy
On the orders of the church, Leon Battista Alberti did not marry and remained celibate all his life. He was extremely attached to his pets.
He died on 25 April 1472 in Rome, at the age of 68.
Recommended Lists:
Renaissance Painters #13
Artists & Painters #297
Miscellaneous #2003
Intellectuals & Academics #544
Architects #62
You May Like