Frederick Law Olmsted was an American landscape architect, often regarded as father of American landscape architecture for his role in the designing of many well-known urban parks including Prospect Park and Central Park in New York City, as well as Elm Park in Worcester, Massachusetts. He also played a major part in the designing and building of the country's first and oldest coordinated system of public parks and parkways, and America’s oldest state park, Niagara Reservation in Niagara Falls, New York. Born as the son of a wealthy merchant, he developed an early interest in nature and grew up to be a creative young man. A hard working student, he was almost ready to enter Yale College for his higher studies, but had to ditch his plans because of a medical condition. Unable to establish himself in any particular career for years, he worked as a clerk, a sailor in the China trade, and a farmer before finally making a name for himself as a journalist. His career as a journalist brought him into contact with Andrew Jackson Downing, a prominent landscape architect, and the English-born architect Calvert Vaux. Soon Olmstead too ventured into landscape architecture and formed a successful collaboration with Vaux which lasted for many years; during this time the men designed several major public parks which earned them much acclaim and recognition. Gustave Eiffel
Architects #36
DID WE MISS SOMEONE?
CLICK HERE AND TELL US
WE'LL MAKE SURE
THEY'RE HERE A.S.A.P
Quick Facts

American Celebrities
Male Architects
American Architects
Taurus Men
Childhood & Early Life
Frederick Law Olmsted was born in Hartford, Connecticut, on April 26, 1822, to John Olmsted and Charlotte Law. His father was a successful merchant with a strong love for nature, people, and places. Frederick had one brother.
Frederick’s mother died when Frederick was quite young and his father remarried soon after.
Frederick was a good student and graduated from Phillips Academy in 1838. He aspired to pursue his higher studies from the Yale College but sumac poisoning weakened his eyes so he gave up college plans.
Unable to get a college education, he struggled for a few years working at different jobs as a sailor and a farmer. After his sight improved slightly, he started attending lectures in science and engineering at Yale University. 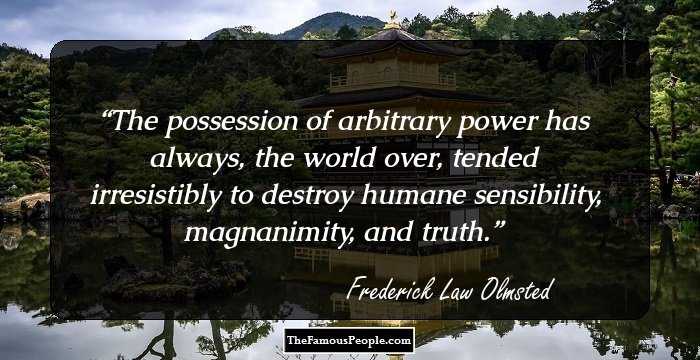 Who Is The Greatest Female Warrior In History?
Career
He travelled throughout Europe in 1850 and visited public gardens in England which greatly impressed him. He subsequently published ‘Walks and Talks of an American Farmer in England’ in 1852 which got him noticed for his writing skills and helped him embark on a career as a journalist.
The ‘New York Daily Times’ commissioned him to conduct an extensive research on the slave economy in the American South and Texas. He routinely sent his reports to the publication which were published in three volumes: ‘A Journey in the Seaboard Slave States’ (1856), ‘A Journey Through Texas’ (1857), ‘A Journey in the Back Country in the Winter of 1853-4’ (1860).
During the 1850s, his career took an interesting turn for the better. He became acquainted with the famous landscape architect Andrew Jackson Downing, who introduced him to the English-born architect Calvert Vaux. Olmsted and Vaux participated in the Central Park design competition together and were announced as winners, in 1858.
The two men began designing the Prospect Park in Brooklyn in 1865. They continued their partnership and went on to design other projects too after designing the Prospect Park. Even though Vaux was the more experienced of the two, it did not take Olmsted long to overtake Vaux in terms of popularity due to his grand public personality. Their partnership was dissolved in 1872.
During the 1860s, he also worked as the Executive Secretary of the U.S. Sanitary Commission, a precursor to the Red Cross in Washington, D.C. In this position he tended to the wounded during the American Civil War and headed the medical effort for the sick and wounded at White House in New Kent County during Union General George B. McClellan's Peninsula Campaign.
As a landscape architect he often collaborated with Henry Hobson Richardson and helped him in devising the landscaping schemes for several projects, including Richardson's commission for the Buffalo State Asylum.
Olmsted created numerous city parks all over the United States and also conceived entire systems of parks. His accomplishments include designing the park system for Louisville, Kentucky, and the system for Milwaukee, Wisconsin. He also chaired the first Yosemite commission, taking charge of the property for California for several years.
He was one of the early leaders of the conservation movement in the United States and was active in the 1880s in efforts to conserve the natural wonders of Niagara Falls which was threatened by rampant industrialization. He also campaigned to preserve the Adirondack region in upstate New York and opposed park projects on conservationist grounds. He retired in 1895.
Major Works
Frederick Law Olmsted and Calvert Vaux won a competition to design the Central Park in 1858 and proceeded to work on this project. Situated in middle-upper Manhattan, New York City, the Central Park is today the most visited urban park in the United States as well as one of the most filmed locations in the world. It has been a National Historic Landmark since 1962.
The Prospect Park was another major project designed by Olmsted and Vaux. It is a 585 acres (237 ha) public park in the New York City borough of Brooklyn, situated between the neighborhoods of Park Slope, Prospect Lefferts Gardens, Ditmas Park and Windsor Terrace, and is counted among the best known works of this landscape architect.
Personal Life & Legacy
Frederick Law Olmsted married Mary Cleveland, the widow of his brother John, in 1859, and adopted her three sons (his nephews). They had three children of their own, two of who msurvived infancy.
He suffered a mental breakdown following his retirement and after a few years, took up residence as a patient at McLean Hospital where he remained until his death. He died on August 28, 1903, at the age of 81.
You May Like