Klaus Iohannis (also spelled Johannis) is the current President of Romania, in office since December 21, 2014. He became the president after a surprise win in the 2014 presidential election where he garnered 54.43% of the votes. Prior to becoming the president he had served as leader of the Democratic Forum of Germans in Romania from 2002 to 2013. Before becoming a full-time politician he worked as a physics teacher and a school inspector. As a politician his first major victory came in 2000 when he was elected the mayor of the city of Sibiu representing the Democratic Forum of Germans in Romania. In this role he helped to turn the city into one of Romania's most popular tourist destinations, an achievement that earned him the trust and respect of the citizens. He also tightened the city administration and established contacts with foreign officials and investors. A highly popular mayor, he was re-elected by landslides in 2004, 2008 and 2012. His political aspirations grew with time and he became a member of the National Liberal Party in 2013 and was soon made the party’s president. In 2014, he became the party’s main candidate for the presidential elections and successfully beat his opponent, Prime Minister Victor Ponta, by a wide margin to become the country’s president. Kem Sokha
Political Leaders #608
Presidents #157
Leaders #831
Continue Reading Below
DID WE MISS SOMEONE?
CLICK HERE AND TELL US
WE'LL MAKE SURE
THEY'RE HERE A.S.A.P
Quick Facts

Romanian People
Romanian Men
Tall Celebrities
Tall Male Celebrities
Male Leaders
Childhood & Early Life
Klaus Werner Johannis was born on June 13, 1959, in Sibiu, Romania, to Susanne and Gustav Heinz Johannis. He has a younger sister, Krista Johannis. His father worked as a technician at an enterprise, while his mother was a nurse.
He studied physics at the Faculty of Physics of the Babeș-Bolyai University in Cluj-Napoca and graduated in 1983.
Continue Reading Below
You May Like

The Best Black Actresses Of All Time
Career
He embarked on a career as a high school physics teacher and worked at various schools and colleges. From 1989 to 1997, he worked at the Samuel von Brukenthal Gymnasium in Sibiu, the oldest German-speaking school in Romania.
In 1997, he was made the Deputy General School Inspector of Sibiu County, a position he held until 1999. He became the General School Inspector, head of public schools in the county in 1999.
Klaus Iohannis had always been interested in politics. He had joined the Democratic Forum of Germans in Romania (FDGR) in 1990 and served as a member of its board of education in Transylvania from 1997.
His first big political achievement came in 2000. The FDGR chose him as a candidate for mayor of Sibiu. He won the election with 69.18% of the votes to become the first ethnic German mayor of a Romanian city since Albert Dörr, who served from 1940 to 1945.
Immediately upon taking up this post, he started working to improve the city which was close to ruins. He began strengthening the infrastructure and implemented administrative reforms.
His determination and dedicated work made him popular and he easily won the re-election in 2004. Continuing with the good work he started during his first term, he restored the city and turned it into one of Romania’s major tourist destinations.
In 2007, Sibiu was declared the European Capital of Culture along with Luxembourg. His popularity soaring by now, he won 87.4% of the vote in 2008 in the mayoral election. He would win the re-election in 2012 as well.
In 2009, a grand coalition made of the National Liberal Party (PNL), the Social Democratic Party (PSD) and the Hungarian Democratic Union (UDMR), proposed to President Traian Basescu that he name Iohannis the Prime Minister. Basescu refused.
A powerful politician by now, Klaus Iohannis joined the PNL in 2013. He was soon elected the vice president of the party and in June 2014, he was elected President of the PNL with 95% of the vote.
He became the party’s main candidate for the presidential elections. PNL then made an alliance with the Liberal Democratic Party (PDL) to support Iohannis’ presidential bid. The two parties formed the Christian Liberal Alliance with Iohannis as its candidate for the presidential election in November 2014.
Viewed as an honest and upright politician, his presidential campaign focused on fighting corruption and on improving the justice system. He also received support from major political figures like Trajan Basescu, former President of the country, and Angela Merkel.
Klaus Iohannis gained 54.43% of the votes in the presidential election, beating his opponent Prime Minister Victor Ponta by a wide margin to emerge victorious. He assumed office as the 5th President of Romania on December 21, 2014.
As the president, he is focused on strengthening the legislation and the justice system, and is working towards building a strongly pro-Western foreign policy. He has made many foreign trips to countries like France, Germany, Poland, Italy, Spain, US, and Israel to engage in talks with the heads of the states and other prominent political figures.
Major Works
As the Mayor of Sibiu, he helped to turn the hitherto little known city into one of Romania's most popular tourist destinations. He strengthened the city’s infrastructure and tightened the administration to build the city into a major tourist spot. The city became European Capital of Culture in 2007 which made him a national figure.
Awards & Achievements
He was made the Knight of the Order of the Star of Romania in 2007 and Knight of the National Order of Merit of Romania in 2011.
He was honored with the Cross of the Order of Merit of the Federal Republic of Germany in 2006 and the Officer's Cross of the Order of Merit of the Federal Republic of Germany in 2014.
Personal Life & Legacy
Klaus Iohannis married ethnic Romanian Carmen Lăzurcă in 1989. His wife is an English teacher. The couple has no children.
You May Like

See the events in life of Klaus Iohannis in Chronological Order 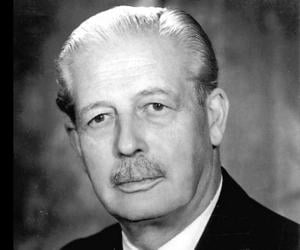