Silvio Berlusconi was the longest serving post-war Prime Minister of Italy, who occupied the office for nine years in total, in three different terms. Apart from being a politician, he is also an entrepreneur, media tycoon and convicted tax evader. One of Europe’s most controversial figures, Berlusconi made his way to become one of the most eminent, influential and high-ranking citizens of the country. He did not let his middle class upbringing come in the way of realising his dream. With the aid of persisting determination and forceful will, he went on to first become Italian entrepreneur and media tycoon and later a prominent politician. He inaugurated his media career by settling up a small cable television company ‘Telemilano’. Soon he founded the country’s first media group Fininvest and created Italy’s first and only commercial television empire. His foray into the political scene also reaped profitable results, for foresightedness and impressive mannerism won him the seat of the Prime Minister of Italy for three times, from 1994 to 1995, 2001 to 2006 and 2008 to 2011. He is the third longest-serving Prime Minister since the Unification of Italy, after Benito Mussolini and Giovanni Giolitti. To know more about this Italian media magnate and political plutocrat, browse through the following lines. Italian People
Prime Ministers
Political Leaders
Italian Men
Male Leaders
Childhood & Early Life
Born in a middle class family to Luigi Berlusconi and Rosa Bossi, Silvio Berlusconi was the first of the three children of the couple. He has a younger sister and brother. His father was a bank employee and his mother was a homemaker.
Academically, he completed his basic education from Salesian college before enrolling himself at the Universita Statale in Milan for a degree in Law. He graduated from the same in 1961 with honours.
During his days at the university, he developed a knack for playing bass and became proficient at it. He started performing as a cruise ship crooner. 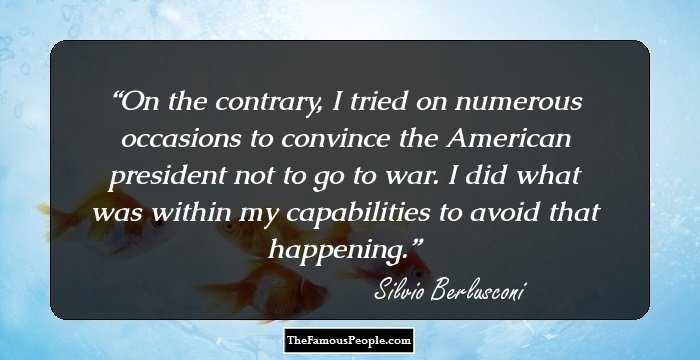 Who Is The Most Popular BTS Member?
Career
He began his career in construction industry, his first notable assignment being erecting 4000 residential apartments building in Milan in late 1960s.
Making a fortune out of real estate, he jumped into the world of media by setting up a small cable television company, ‘Telemilano’ in 1973. What distinguished his channel from the rest is that he used the same to introduce Italy to foreign shows.
His business in media earned fruitful results as he went on to buy two more channels and relocated the station to the central of Milan. He then climbed the success ladder further by founding his first media group, Fininvest in 1978. The company owned a string of local TV stations across the country.
Two years later, i.e. in 1980, he founded Italy's first private national network, Canale 5. In the subsequent years to come, he bought two more private national networks, Italia 1 in 1982 and Rete 4 in 1984, thus creating the first commercial TV Empire.
After political turmoil in Italy in 1985, due to the legal complications, Berlusconi's three channels were not allowed to broadcast news and political commentary. The matter was sorted out in 1990 by the Mammi Law, which elevated the status of channels to full national TV channels.
Meanwhile, he ventured into politics in 1993, founding a political party Forza Italy. Following year, he was elected to the Chamber of Deputies.
In the 1994 parliamentary elections, he successfully won the chair of the Prime Minister.
Difference crept between the coalition parties of Forza Italy, the League and National Alliance, that led to the downfall of his cabinet in merely nine months. In the subsequent elections held in 1996, he lost to centre-left candidate Romano Prodi.
Impervious to the defeat, he remained active in the political circle and re-emerged as the leader of the right wing coalition in the 2001 parliamentary elections. During his electoral campaign, he promised to simplify tax system, raise employment rate, finance public work programme, raise pension and bring down crime rate.
Continue Reading Below
Unlike the preceding election, his party won a staggering 45.4% votes. He defeated centre-left candidate Francesco Rutelli to ascend to the office of the Prime Minister.
Berlusconi had a tumultuous stint as Prime Minister. While he claimed that he fulfilled most of his electoral promises, his opponents said that he failed miserably. Media too was against him.
He contested in the 2006 parliamentary elections but lost narrowly to centre-left leader of the opposition party, Romano Prodi. For the following two years, Prodi served as the Prime Minister before his cabinet collapsed resulting in a political crisis.
In the 2008 parliamentary elections, he formed a coalition with Lega Nord and Sicilian Movement for Autonomy to form The People of Freedom. The coalition won and he was sworn in as the Prime Minister for the third time on May 8, 2008. He promised to improve the state of Italian economy by fighting against tax evasion, reforming justice and reducing public debt.
He formally dissolved Forza Italia and established The People of Freedom on March 27, 2009. He was elected as the Chairman of the political congress. However, during his tenure as the Prime Minister and Chairman of The People of Freedom, he failed to revive Italy’s economy and bring it back from the debt surge.
With the escalating fiscal problem and descending majority in the parliament, he stepped down from the premiership on November 16, 2011. He was succeeded by Mario Monti.
In the recently held 2013 parliamentary elections, he contested to lead the coalition without becoming Prime Minister as per the agreement with Lega Nord. He gained 29% of votes
Presently, he is supporting the government of Enrico Letta, together with the Democratic Party and the centrist Civic Choice, of the former Prime Minister Mario Monti
Over the years, he has been accused of various charges including embezzlement, tax fraud, false accounting and bribery. He was also involved in sex scandals and has been accused of criminal misbehaviour.
Continue Reading Below
In 2012, he was sentenced to four years of imprisonment for tax fraud while in the following year; he was sentenced to seven years for paying an underage woman for sex.
Not admitting to any of the offense charges, he has claimed to be framed by opposition leaders and is fighting against his cases. Since he is more than 75 years of age, he is not likely to serve a jail term and instead face house arrest. 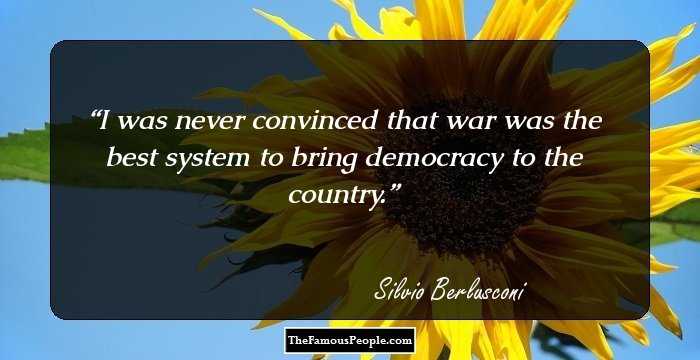 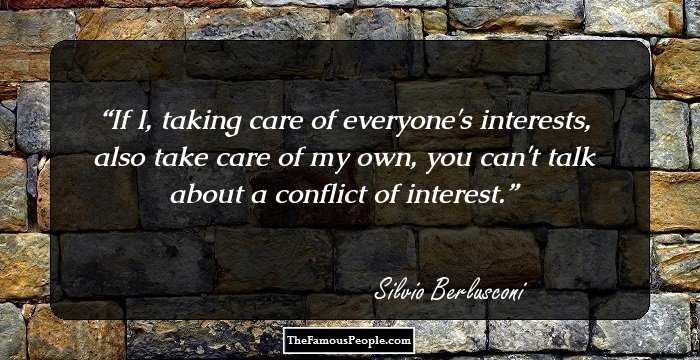 Quotes: You
Trivia
He is nicknamed ‘Il Cavaliere’ or ‘The Knight’, because in 1977 he became the youngest member of the Ordine Cavalleresco al Merito del Lavoro, an Italian order of knighthood reserved to entrepreneurs.
Recommended Lists:
Leaders #585
You May Like

Quotes By Silvio Berlusconi | Quote Of The Day | Top 100 Quotes

See the events in life of Silvio Berlusconi in Chronological Order