Melania Trump is the First Lady of the United States of America. Her husband, Donald Trump, became the 45th President of the country in 2017. Melania married Donald Trump in 2005 to become his third wife. She is the first naturalized US citizen and the second foreign-born US First lady after Louisa Adams, wife of the sixth president, John Quincy Adams. Melania attained US citizenship in 2006. She was born in Slovenia to an Austrian father and a Slovenian mother. Prior to her wedding with Donald Trump, Melania was a professional model and actress in New York. She has worked with renowned photographers from Milan, Paris, and New York. Though Melania avoided the limelight during her husband’s presidential campaign, she was targeted by the media several times on account of her modelling career, immigrant origin, plagiarized speech at the Republican National Convention, and false claims of a degree from the University of Ljubljana. Melania strongly believes in women equality and stands for it. American People
American Women
American First Ladies
Taurus Women
Childhood & Early Life
Melania Trump was born Melanija Knavs on April 26, 1970, at Novo Mesto, Slovenia, which was a part of communist Yugoslavia back then.
She was raised up in a humble background. Her father, Viktor Knavs, worked as a car dealer and her mother, Amalija, worked as a children’s clothes designer at a manufacturer named ‘Jutranjka’ in Sevnica.
Melania has a sister, Ines Knauss, and also a half-brother from her father’s previous relationship. 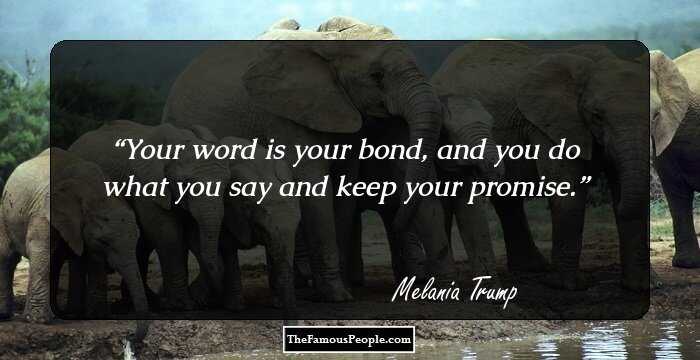 Continue Reading Below
Career
Young Melania wanted to pursue a career in modelling and started her journey at the age of sixteen when she started working with Stane Jerko, a fashion photographer from Slovenia.
At eighteen years of age, she signed a contract with a modelling agency in Milan.
She enrolled at the University of Ljubljana to study designing. To channelize her efforts completely towards a modelling career, she dropped the course after a year.
In 1992, the ‘Jana’ magazine announced her as the runner-up in the ‘Look of the Year’ contest, in Ljubljana.
After she began concentrating on modelling, she worked for some time in Paris and Milan.
In 1996, Melania moved to New York on H-1B visa where she became a successful model and received many projects with photographers, such as Patrick Demarchelier and Helmut Newton. During this time, she changed her name to Melania Knauss.
Trump featured on the cover pages of popular magazines like ‘Harper's Bazaar,' ‘Vogue,' ‘Front,’ ‘Vanity Fair,’ and ‘GQ.'
In 2001, Melania got the green card for her contribution in the field of modelling. Finally in 2006, she became an American citizen.
She was seen as an actress in ‘Miss USA’ in 2003; Donald Trump’s reality show ‘Celebrity Apprentice’ in 2004, and ‘One Nation Under Trump’ in 2016.
Continue Reading Below
Melania Trump has her own label of designer watches, jewellery, and skincare products. 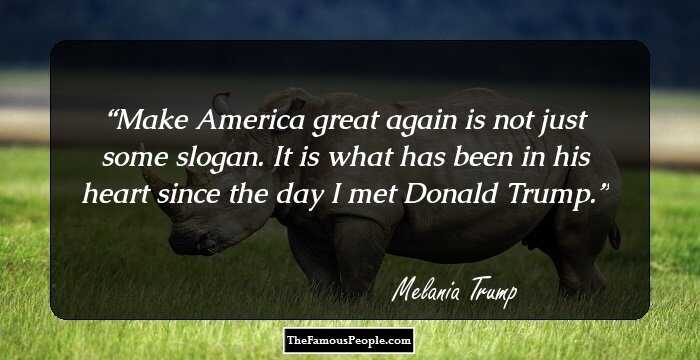 Quotes: Heart
Marriage
Melania and Donald Trump met at a fashion party in New York City in September 1998. Being single, Trump entered into a serious relationship with her.
She accompanied Trump for a few campaigns like the Reform Party presidential nomination in 2000.
They got engaged in 2004, and married on January 22, 2005, at The Episcopal Church of Bethesda-by-the-Sea in Palm Beach, Florida.
While Donald Trump was campaigning for the 2016 presidential elections, Melania Trump gave a speech on July 18, 2016, at the Republican National Convention. The speech became controversial after it was found to be partly similar to Michelle Obama's speech given at the Democratic National Convention in 2008.
Melania Trump became the First Lady of the United States on January 20, 2017, when her husband, Donald Trump, became the 45th president of the country.
Personal Life & Legacy
In 1998, Melania Knauss met Donald Trump during a fashion party in Manhattan. The party was hosted by the Italian businessman, Paolo Zampolli. At the party, Donald Trump had approached Melania for her phone number. After an initial refusal, she began dating him and they got engaged in 2004.
She married Donald Trump on January 22, 2005, at the Palm Beach, Florida, with a reception at Donald Trump’s ‘Mar-a-Lago’ estate.
The wedding was attended by celebrities, such as Rudy Giuliani, Katie Couric, Heidi Klum, Matt Lauer, and Kelly Ripa. The then US President Bill Clinton and his wife Hillary Clinton were also part of the wedding.
On 20th March 2006, Melania gave birth to son, Barron William Trump.
She is also the step mother of Donald Jr., Eric, Ivanka, and Tiffany Trump. 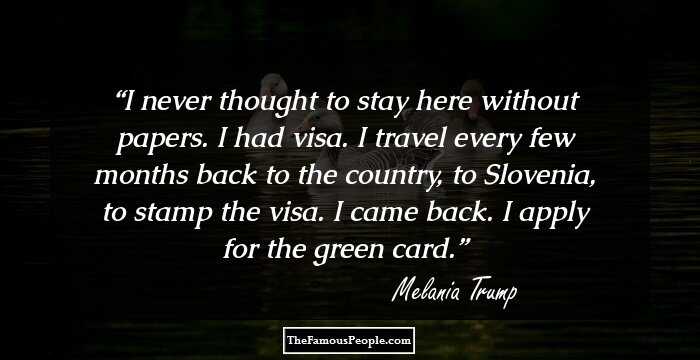 Trivia
Melania Trump is a multi-linguist with good command over Slovene, English, German, French, Italian, and Serbo-Croatian.
She was embroiled in a controversy regarding her degree in architecture and design from the University of Ljubljana. This alleged false claim was mentioned on her official website. After this was highlighted by the media, it was removed.

Quotes By Melania Trump | Quote Of The Day | Top 100 Quotes

See the events in life of Melania Trump in Chronological Order