Joseph Haydn was an 18th century Austrian composer of the Classical period who played a major role in the development of chamber music. One of the most prominent composers of his time, he is fondly referred to as "Father of the Symphony" and "Father of the String Quartet" in recognition of his immense contribution to musical form. Born as the son of a folk musician, he developed an early interest in music. His musically inclined parents recognized their young son’s talents and arranged for him to acquire musical training. He blossomed into a good singer and performed in a choir while he was a boy. He grew up to be a very talented singer and instrumentalist, but faced many struggles in his attempts to get established in a profession. Initially he worked in a string of jobs without much success before finally finding work as a valet–accompanist for the Italian composer Nicola Porpora from whom he learned the fundamentals of composition. Joseph Haydn did not receive a systematic training in musical theory; he self-educated himself by studying the works of prominent composers like Carl Philipp Emanuel Bach, whom he later acknowledged as an important influence. Eventually he established himself as a famous composer in his own right and was appointed as a court musician of the wealthy Esterházy family. Anton Bruckner
31st March In History
DID WE MISS SOMEONE?
CLICK HERE AND TELL US
WE'LL MAKE SURE
THEY'RE HERE A.S.A.P
Quick Facts

Austrian People
Austrian Men
Male Pianists
Aries Musicians
Male Composers
Childhood & Early Life
Franz Joseph Haydn was born on 31 March 1732 in Rohrau, Austria to Mathias Haydn, a wheelwright, and his wife, Maria who used to work as a cook before marriage. Both of his parents, especially his father loved music and Mathias was also a folk musician who had taught himself to play the harp.
He started displaying his musical gifts from an early age and his parents sent him to live with their relative, Johann Matthias Frankh, the schoolmaster and choirmaster in Hainburg, who promised that he would train Joseph in music.
As a young child, he learned to play various musical instruments and received a good basic training. His talents got him noticed by Georg von Reutter, the musical director of St. Stephen’s Cathedral in Vienna, and he invited Joseph to serve as a chorister in Vienna’s most important church.
He moved to Vienna in 1740 and stayed at the choir school for nine years during which he acquired a lot of practical knowledge through performing but had little training in musical theory.
Over the years he physically matured and by 1749 his voice broke and he was no longer able to sing high choral parts. He was then expelled from the cathedral choir and the choir school. 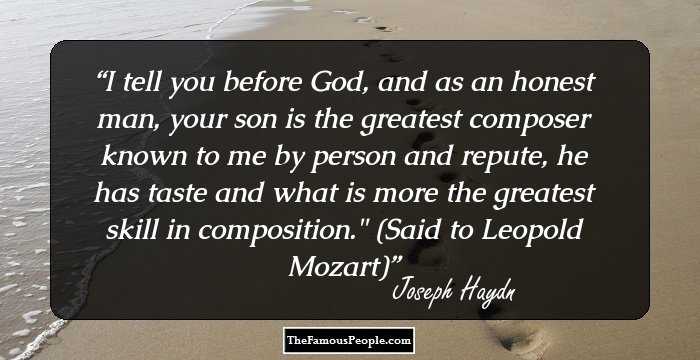 Quotes: You, Me, God, I
Continue Reading Below
Musical Career
Jobless all of a sudden, he struggled to establish himself in a career. Over the next few years he worked at a variety of jobs including that of a music teacher and a street serenader.
Since he did not receive any systematic training in musical theory while at the choir school, he embarked on a journey of self-education by studying the works of prominent composers and by practicing the exercises given in manuals of musical theory.
In 1752, he caught the attention of the Italian composer and singing teacher Nicola Porpora, who accepted him as valet–accompanist. It was there that he learned the true fundamentals of composition.
His skills developed over time and soon he started writing music along with playing instruments. One of his first compositions, the opera, ‘Der krumme Teufel’ ("The Limping Devil") was first premiered in 1753 with great success.
He gained much in stature over the next few years and was appointed as a musical director and chamber composer for the Bohemian count Ferdinand Maximilian von Morzin, in 1758. In this position he was made in charge of an orchestra of about 16 musicians.
After working with Morzin for three years he accepted a similar job offered by Prince Paul Anton, head of the wealthy Esterházy family, in 1761. His official title was Vice-Kapellmeister and he was placed in charge of most of the Esterházy musical establishment.
The old Kapellmeister, Gregor Werner, died in 1766 and Haydn was elevated to full Kapellmeister. He served the Esterházy family for nearly three decades and greatly raised the quality of the prince’s musical ensembles by appointing a number of gifted instrumentalists and singers.
The Esterházy family was very supportive of Haydn’s ambitious plans and greatly appreciated his musical contributions. Over the course of his employment he had the good fortune of working in an environment highly conducive to the development of his musical skills.
Haydn not only composed operas for the court, but also composed symphonies, string quartets, and other chamber music. During his career with the prince, he frequently travelled to Vienna and met Wolfgang Amadeus Mozart on one of these trips. The men developed a close friendship and found inspiration in each other’s work.
Continue Reading Below
The head of the Esterházy family, Prince Nikolaus, died in 1790, and was succeeded by his son, Prince Anton. The new prince had no interest in music and dismissed most of the court musicians. However he retained Haydn though he was no longer assigned any important duty. This gave Haydn ample time to pursue his personal musical interests.
He embarked on a trip to England in 1791 and spent several months there. He met eminent musicians and received much respect from the English for his works. In mid 1792 he left for Germany where he met a young Ludwig van Beethoven and soon realized the potential he possessed. Haydn invited the young man to come to Vienna and receive musical instruction from him. Accordingly Beethoven moved to Vienna in 1792 and began studying with Haydn.
By the late 1790s, Prince Anton had died and was succeeded by Nikolaus II. The new prince wanted to revive the Esterházy musical establishment and requested Haydn to serve again as Kapellmeister. Haydn took up the position on a part-time basis. 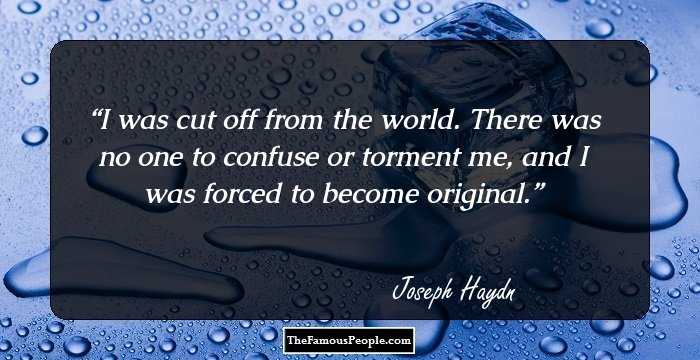 Quotes: Me, I
Major Works
Joseph Haydn was a prolific composer with 104 Symphonies, 32 Piano Trios, 62 Piano Sonatas, and more than 90 String Quartets to his name. One of his most popular String Quartet is the ‘Emperor Quartet’ Op.76 No.3 which uses the theme from the anthem ‘God Save Emperor Francis’. It later became the melody for the Austrian national anthem and then the German national anthem.
Personal Life & Legacy
Joseph Haydn’s personal life was a complicated one. He married Maria Anna Keller in 1760. His marriage proved to be an unhappy one, and both the spouses took on lovers. He had no children from this marriage.
He had a long term affair with Luigia Polzelli, a young Italian mezzo-soprano in the prince’s service.
As a successful and respected composer, he had become quite wealthy by his later years. He was well cared for by his servants during the last years of his life and died peacefully on 31 May 1809, aged 77. 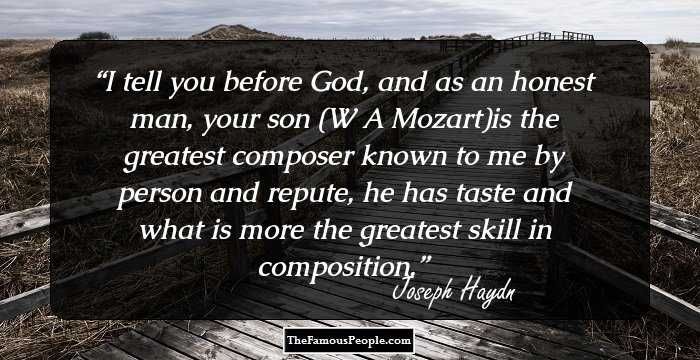 See the events in life of Joseph Haydn in Chronological Order