Advanced Search
Hugo Wolf was a late 19th century Austrian composer best known for his art songs. He was a highly creative person whose works, though influenced by Romantic music were unique and intense in their own right. He became especially well-known for his tremendous influence on the German lieder—lieder are art songs, a genre of composition in which Romantic German poems are set to music. He is credited to have brought lieder to its peak in the late 19th century. A child prodigy, he started learning piano and violin when he was just four years old. Related to the renowned composer Herbert von Karajan, he was deeply interested in music from an early age and was not at all interested in any other subject. He did not perform well in school because of his preoccupation with music and was often dismissed from his classes. Eventually he embarked on a career as a composer and became famous for his art songs. His works were critically acclaimed and he gained a reputation as a brilliant song composer. Along with his skills in the field of music, he was equally known for his fiery temperament and unpredictable behavior. His career as a composer was frequently disrupted by bouts of depression and he also suffered from numerous other health issues. Franz Peter Sch...
DID WE MISS SOMEONE?
CLICK HERE AND TELL US
WE'LL MAKE SURE
THEY'RE HERE A.S.A.P
Quick Facts

Austrian Celebrities
Male Musicians
Male Composers
Pisces Musicians
Austrian Composers
Childhood & Early Life
Hugo Wolf was born on 13 March 1860 in Windischgrätz (now Slovenj Gradec, Slovenia), then a part of the Austrian Empire. His father was a leather dealer.
He was musically inclined from childhood, and started learning piano and violin from his father at the age of four. He continued learning music in primary school and soon became preoccupied with music. He was not interested in learning any other subject and was thus expelled from school.
Even though his father encouraged his early interest in music, he had hoped that Hugo would not choose to embark on a musical career. However, Hugo Wolf joined the Vienna Conservatory in 1875, disappointing his after.
He studied at the conservatory for two years and here too he proved to be a difficult and rebellious student. He openly criticized his teachers and was very short-tempered because of which he was expelled from the conservatory.
During this time he became acquainted with the composer Richard Wagner from whom he received considerable support and encouragement. Later on he met Johannes Brahms who also played a key role in motivating the young musician.
After being expelled from the conservatory he stayed for some months with his family. His relationships with his family members were also strained due to his impulsive behavior and hot temper. 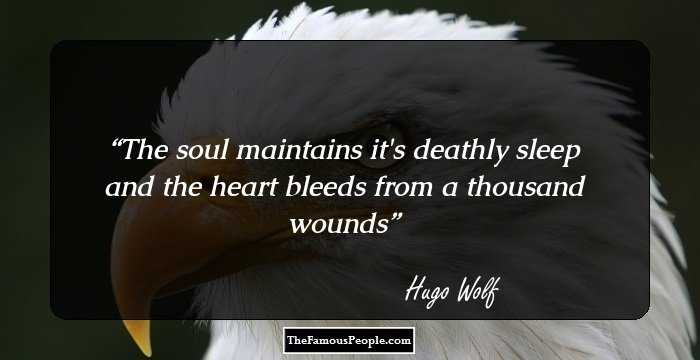 Quotes: Heart, Soul
Continue Reading Below
Career
He eventually took up a job of teaching music. Even though his temperament was not suited to this position, the fact that he possessed great musical skills made him a good teacher.
Though he was not able to earn much success initially, he received support from several people which enabled him to make a living as a composer.
He was in love with the daughter of one of his patrons and she inspired him to write music. It was during the course of this relationship that he began to develop a mature style of writing that would evolve over time.
He was appointed as the second Kapellmeister at Salzburg. Becoming a Kapellmeister was a mark of success for professional musicians of this time. In this position he was in-charge of music making and was also required to supervise other musicians.
Hugo Wolf’s temperament and moodiness prevented him from finding success in this position and he soon realized that he was not at all suited to the prestigious post of a Kapellmeister. After quitting his job as a Kapellmeister he returned to teaching in Vienna.
He contracted syphilis in the late 1870s. The disease would affect not only his physical health, but also his mental well-being. He often went into depression and was unable to compose.
In spite of the disease, he found himself highly inspired during remissions and produced magnificent works. He was appointed the music critic of the ‘Wiener Salonblatt’ in 1883.
He quit his job as a critic in 1887 and focused more on composing. The death of his father the same year left him devastated and unable to compose for the reminder of the year.
The years 1888 and 1889 proved to be highly productive for him. He published a lot of his works during this period. His works received positive reviews and he was very happy with his own compositions. However, again he began suffering from ill health and went into depression.
Personal Life & Legacy
His first love was Vally Franck, the daughter of one of his benefactors. Their relationship continued for three years before Vally left him.
Later on, he fell in love with Melanie Kochert, the wife of his friend Heinrich Köchert. Their affair continued for many years and Melanie continued visiting Hugo Wolf till the end of his life. However, the guilt of her extra-marital affair weighed heavily on her heart and she killed herself.
He had contracted syphilis in the late 1870s. Over the years the disease progressed and affected his health badly. He also suffered from depression as a result of this. During his later years he suffered from severe psychological issues and once even tried to commit suicide. Eventually he was placed in an asylum in Vienna where he died on 22 February 1903.

See the events in life of Hugo Wolf in Chronological Order