Franz Peter Schubert was an Austrian composer of the early 19th century who became famous only after his early death. His talent as a composer of classical and romantic compositions was mostly ignored while he was alive but became significant only in the 19th century. Though his life was very short, he was a prolific composer who used to create many compositions in one single day. His works were greatly influenced by the writings of Goethe and were based mainly on the piano. His sonatas on the piano used melodies that had long lines instead of the traditional short themes and the romantic songs or ‘Lieder’ in the German language written by him put greater importance on the piano than on any other instrument as an accompaniment. He was not that well known in his early years as he was neither a literary person like many of the other composers during that period nor was a great performer or a famous conductor. But during the short time he was alive he wrote more than six hundred songs, nine symphonies, a large number of compositions for the piano and five masses. His masterpieces which brought enjoyment to many music lovers all over the world came to light only after he had passed away. Alban Berg
Pianists #4
Composers #17
Classical Musicians #2
DID WE MISS SOMEONE?
CLICK HERE AND TELL US
WE'LL MAKE SURE
THEY'RE HERE A.S.A.P
Quick Facts

Austrian People
Composers
Classical Musicians
Austrian Men
Male Pianists
Childhood & Early Life
Franz Peter Schubert was born on January 31, 1797 in Alsergrund, Vienna, Austria. His father Franz Theodor Schubert was a schoolmaster who founded his own school, and his mother Elizabeth Vietz was engaged in providing domestic services to a Viennese household before her marriage.
He had three elder brothers named Ferdinand, Ignaz and Petrus and a sister named Maria Theresia. Out of the fourteen children that his father had (including an illegitimate child), nine had died in their infancy.
He learnt to play the violin from his father and his elder brother Ignaz when he was only six years old and also learnt to play the organ from an organ player named Michael Holzerat the ‘Imperial Court Chapel’.
His talent for performing vocal compositions was recognized by the leading authority in music in Vienna, Antonio Salieri, in 1804.
At the age of eleven he joined the choir of the ‘Imperial Court Chapel’ after passing the entrance examination and received his formal education at ‘Stadtkonvikt’ from 1808 to 1813.
He not only sang in the choir but also played the violin in the orchestra and was also an exceptional student. He left the choir, but not the seminary, at the age of fifteen when he could nolonger sing as before due to a change in his voice.
In 1813 Franz left ‘Stadtkonvikt’ and went home after which he joined the ‘Normalhauptschule’ to obtain training as a teacher.
During his educational days he was befriended by a 20-year-old law student named Joseph Spaun who formed an orchestra made up of his fellow students. 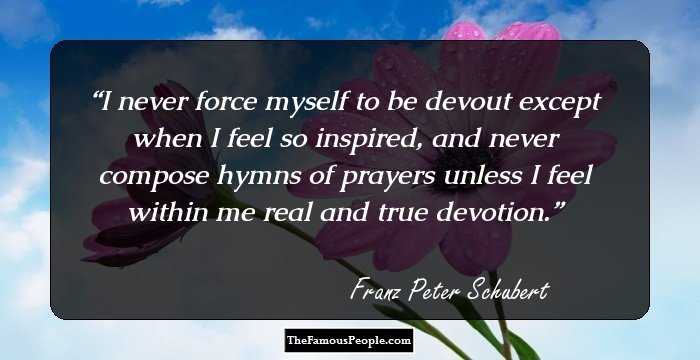 The Best Black Actresses Of All Time
Budding Composer
Franz Peter Schubert composed his earliest ballads while he was still in high school including ‘Hage’s Klage’ in 1811 styled on those written by Johann Rudolf Zumsteeg.
In 1814 he composed his first poem ‘Gretchen am Spinnrade’ or ‘Gretchen at the Spinning Wheel’ based on ‘Faust’ written by Johann Wolfgang von Goethe.
He also composed the music of some solos of Mass which were dedicated to his lady friend Therese Grob. Haydn’s compositions had a great influence on his first symphony.
During the same year he also composed five more musical pieces based on songs written by Goethe.
In late 1814 he joined his father’s school as an assistant teacher. Around this time, he met various actors, singers, lawyers and poets who had a great influence on the young composer’s life. In the same year the ‘Mass’ composed by him was performed in Vienna. 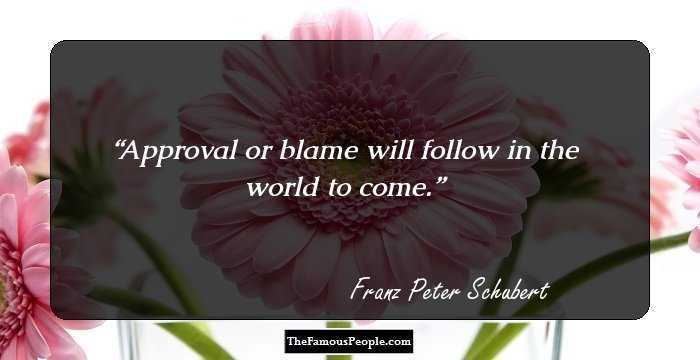 Coming of Age
After 1814, Franz Peter Schubert started to hold private concerts at the homes of his wealthy acquaintances with the help of the singers and actors whom he befriended during this period.
He also wrote a large number of compositions in 1815 which included more than one-hundred and forty-four songs, two ‘Masses’and one symphony.
He set the music for the poems written by a large number of poets such as F.G. Klopstock, J.G. Von Herder, Friedrich von Schiller and others.
Continue Reading Below
He went on composing symphonies even while working as a schoolteacher in his father’s school and wrote musical pieces for ‘Landler’, an Austrian waltz, for which he became quite famous.
He left his teacher’s post in 1816 when his application for a better post was rejected by the school authorities and decided to follow a carefree and unconventional lifestyle. From this time onwards he did not work but depended on his compositions to earn money for his livelihood.
He started performing ‘Schubertiads’, which were his latest compositions, with his friends at various Viennese homes and coffee houses.
Franz moved in with his friend Franz von Schober in 1817 and wrote a large number of sonatas to be played on the piano and composed almost fifty songs during this period.
In March 1818 he appeared on the public stage for the first time to perform some of the compositions that he had written.
In July 1818 he was appointed as a member of the Count Esterhazy’ household and during his stay with the household he composed a large number of piano duets.
He wrote his famous quintet for the piano while holidaying in upper Austria which was soon followed by other compositions such as ‘Wanderer Fantasy’, ‘Oratorio Lazarus’ and others.
Height of Fame
The musical career of Franz Peter Schubert reached its highest point between 1820 and 1823 when his operettas and songs started to be performed by both professionals and amateurs on the public stage and private concerts.
In 1820 he wrote the operetta ‘Die Zwillingsbruder’ or ‘The Twin Brothers’ which was successfully performed in the month of June in the same year.
Continue Reading Below
He also composed the music for the play ‘Die Zauberharfe’ or ‘The Magic Harp’ which was performed on August 1820.
In 1821 Schubert’s music got a lot of attention when the ‘Erlkonig’ was performed and he gained some more new friends such as painter Moriz von Schwind and others. In the same year he composed his seventh symphony though he did not give it the form to be played by any orchestra.
In 1822 he started on his eighth symphony but could complete only two movements as he had fallen ill by that time. By the end of this year he was in financial doldrums and his friends left him.
During the seven days that he spent at the ‘Vienna General Hospital’, Franz Peter Schubert was somehow able to start composing a few of his famous songs which included ‘Die Schone Mullerin’ or ‘The Fair Maid of the Mill’ and also an octet for string and woodwind instruments.
During the period 1826-27, Franz Peter Schubert saw the recurrence of his illness but also composed two of his greatest masterpieces despite his deteriorating health.
He acted as a torchbearer during the funeral of Beethoven in 1827 and wrote his greatest masterpiece during this time.He completed the two series of ‘Impromptus’ for the piano at the end of 1827.
On March 26, 1828 he took a part in a concert where his own works were performed and also attended the first anniversary of Beethoven’s death on the same day. 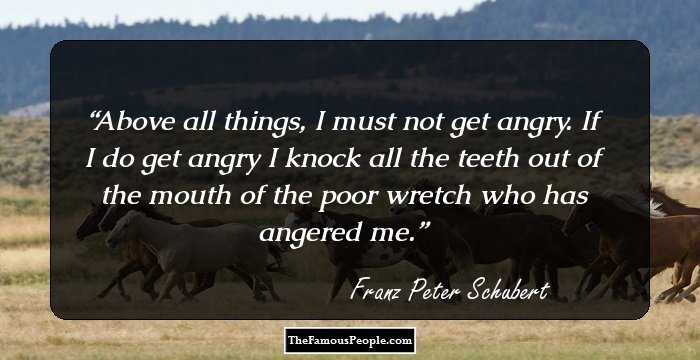 Quotes: Me
Major Works
Franz Peter Schubert had written numerous compositions which include sonatas for the piano, waltzes, trios, quarters and quintets for the piano, chamber sonatas and symphonies.
In 1827 he wrote his greatest masterpiece ‘Die Winterreise’ or ‘A Winter’s Journey’ which was based on a set of twenty-four poems written by Wilhelm Muller describing the journey of a young man suffering from his lover’s rejection through the wasteland in winter.
Personal Life & Legacy
In 1814, Franz Peter Schubert fell in love with a soprano soloist named Therese Groband wanted to marry her but could not because of the harsh marriage law which required proof that heearned enough to support a family.
He contracted syphilis in May 1822 and was admitted for treatment to the ‘Vienna General Hospital’and was discharged after seven days.
His illness reappeared in 1826 and on November 11, 1828 he started having headache and nausea which were diagnosed to be caused by typhoid. He died eight days later, on November 19, 1828. He was only 31.
In 1830, money was raised through a fund to place a memorial stone over his grave.
In 1872, a memorial in his honor was constructed at the Stadtpark in Vienna.
In 1888, his grave was moved to Zentralfriedhof, which is the largest cemetery in Vienna and was placed beside musical geniuses like Johannes Brahms and Johann Strauss II.
Recommended Lists:
Musicians #132
You May Like