(One of the Greatest Composers in the History of Western Music)

Wolfgang Amadeus Mozart sits at the top of the list of music composers who hold a special place in the world of music. In a short span of 35 years, he became the most celebrated musician, writing almost 600 musical pieces all of which are hailed as masterpieces. Throughout his life, Mozart traveled all over the world, composed in abundance, remained a voracious student of music, and experimented with almost all genres of music. His works are considered to be the pinnacles of symphonies, operas, and chamber music. The final phase of his life was very productive, as some of his best known operas, symphonies, and concertos belong to that period. His friend Joseph Haydn wrote, ‘posterity will not see such a talent again in 100 years.’ Not only did he contribute immensely to the world of music during the classical era, but also had a profound influence on the subsequent Western art music. Hugo Wolf
DID WE MISS SOMEONE?
CLICK HERE AND TELL US
WE'LL MAKE SURE
THEY'RE HERE A.S.A.P
Quick Facts

Austrian People
German People
Classical Musicians
Austrian Men
German Men
Male Musicians
Childhood and Early Life
Wolfgang Amadeus Mozart was born on January 27, 1756, in Salzburg (part of present-day Austria which was at the time part of Roman Empire), to Leopold and Anna Maria Mozart. Hailing from Augsburg, his father was a composer, teacher, and chapel master in the court orchestra of archbishop of Salzburg. Mozart’s only sibling to survive infancy was his elder sister Maria Anna. A day after his birth, Mozart was baptized at ‘St. Rupert’s Cathedral.’ As per sources, the Latinized form of his name in baptismal records is ‘Joannes Chrysostomus Wolfgangus Theophilus Mozart.’ When Mozart turned four, his father taught him a few minuets which he played effortlessly. By the time he reached the age of five, Mozart could compose small pieces.
Leopard Mozart was his only teacher during childhood. Mozart was always enthusiastic and keen to learn much more than what he was taught back then. His early compositions and efforts often surprised his father, who gave up composing when Mozart’s musical talent became apparent. Apart from music, Mozart’s father also taught him languages. 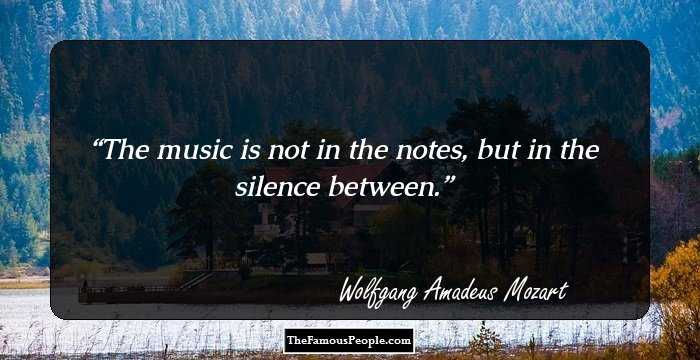 Quotes: Music
Continue Reading Below
Younger Years
In his younger days, Mozart made many journeys to Europe where he and his sister performed as child prodigies. In 1762, his trip to the court of the Prince-elector Maximilian III of Bavaria in Munich and to the Imperial Court in Vienna and Prague extended to almost three and a half years. On this trip, he also visited places like Munich, Mannheim, Paris, London, Hague, Zurich, and Donaueschingen. It was during this trip that Mozart got acquainted with the works of other musicians and composers; the most important among them was the works of Johann Christian Bach. In 1767, when his family was in Vienna, Mozart composed a Latin Drama and performed at ‘Salzburg University.’ After returning to Salzburg, Mozart went to Italy with his father on December 1769. This trip gave him a chance to meet G. B. Martini in Bologna and was made a member of the reputed ‘Accademia Filarmonica.’ While in Milan, Mozart wrote the opera ‘Mitridate, re di Ponto’ (1770), and performed it successfully. Later, he visited Milan in the years 1771, 1772, and 1773 for the premiers of ‘Ascanio in Alba’ (1771) and ‘Lucio Silla’ (1772). By the end of his journey, he wrote his first work, ‘Exsultate, jubilate.’
After returning home in 1773, Mozart was appointed to the court of Prince-Archbishop Hieronymus Colloredo, the ruler of Salzburg. It was during this time that he produced five violin concertos and piano concertos, of which some are considered breakthroughs by the critics in the world of music. During his stay in Salzburg, he and his father visited Vienna and Munich. His trip to Munich resulted in a premiere of his opera ‘La finta giardiniera.’ By this time, he had made numerous friends and earned many admirers. He started working in different genres, including symphonies, sonatas, string quartets, and minor operas. Moreover, Mozart also strived to create operas, for which Salzburg did not offer much opportunities. The situation worsened when the only court theatre in Salzburg was closed. 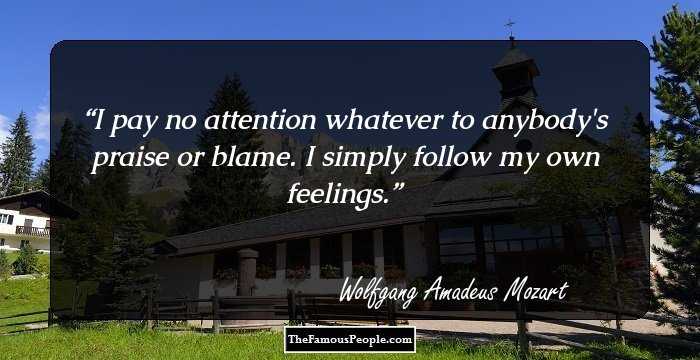 Quotes: I
Chasing Dreams
In 1777, Mozart resigned from his job and traveled to places, such as Augsburg, Mannheim, Paris, and Munich in search of a better career. Though he developed acquaintances with ‘Mannheim,’ a famous orchestra in Europe, it did not benefit him much. He also fell in love with Aloysia Weber who belonged to a musical family. He was offered the post of an organist in Versailles, which he rejected and eventually fell into debts. In 1778, Mozart’s mother passed away. Mozart was again offered the job as court organist and concert master in Salzburg. Though he was not willing to accept it, Mozart returned home in 1779 and took up the job as he was unable to find a suitable job in Mannheim and Munich.
Independent Career
In 1781, Mozart’s opera ‘Idomeneo’ was premiered in Munich. Soon, he was invited to the court of Archbishop Colloredo. Mozart felt offended by the way he was treated at the court by Colloredo, who prevented him from performing before the emperor at Countess Thun's. A quarrel that ensued between him and Colloredo led to Mozart’s resignation, but his resignation was refused initially. However, the composer was dismissed later. After this incident, Mozart settled in Vienna as a freelance performer and composer. 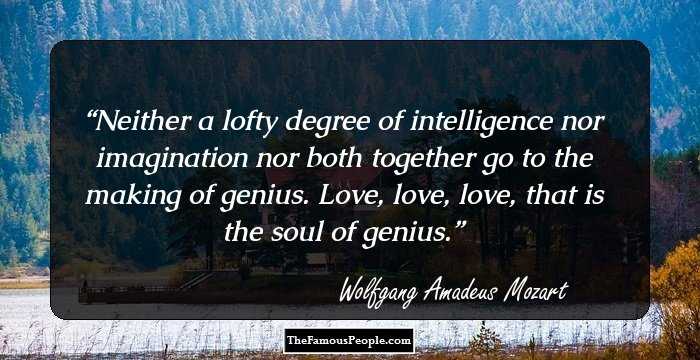 Quotes: Love, Together, Soul
Life In Vienna
In Vienna, Mozart often performed as a pianist. Soon, he established himself as a keyboard player and composer. The opera, ‘Die Entführung aus dem Serail’ (The Abduction from the Seraglio), which premiered in 1782 was a great success and established him as a talented composer. While he was still struggling because of his conflict with Colloredo, he met Aloysia Weber’s family in Vienna, who had moved from Mannheim. Mozart got involved in a relationship with Aloysia’s sister, Constanze. Though they got separated for a brief period, they got married in 1782, at ‘St. Stephen’s Cathedral.’ The couple had six children, of which only two survived infancy.
Flourishing Career
Between 1782 and 1783, Mozart became familiar with the works of Johann Sebastian Bach and George Frideric Handel. This inspired him to compose in the baroque style, and later led to the development of his own unique musical language. In 1783, Mozart and his wife visited Salzburg where he composed one of his greatest pieces, ‘Mass in C minor.’ Though, the work was not completed, it was premiered in Salzburg with Constanze singing the solo part. In 1784, Mozart met Haydn who became his lifelong friend. Mozart later dedicated the six quartets to Haydn. During this time, Mozart also presented concerts as a soloist, with three or four piano concertos in a season. As the theatres had little space, he chose unconventional venues, such as a large room in an apartment or a ball room. Even today, his concerts and concertos are regarded as benchmarks in the world of music.
With his financial stability improving, owing to the returns from the concerts, Mozart and his wife adopted a lavish lifestyle and moved to an expensive apartment. In 1784, he became a freemason. This decision had a great impact in the latter part of his life; he made many Freemason friends and composed Masonic music.
Continue Reading Below
Return To The Operas
After the huge success of ‘Die Entführung aus dem Serail,’ Mozart did not contribute much to the world of music for some time. Later, he collaborated with librettist Lorenzo Da Ponte and composed ‘The Marriage of Figaro,’ which was premiered in Vienna in 1786. The warm reception that he received for ‘The Marriage of Figaro’ encouraged him to collaborate with Da Ponte once again. Along with Da Ponte, he composed ‘Don Giovanni,’ which premiered in 1787. The opera met with success in Prague and in Vienna the following year. These two operas are considered masterpieces in the genre of opera even today. However, the musical complexities pose great challenge to the performers as well as to the listeners. Mozart’s father passed away in 1787.
In 1787, Mozart was appointed chamber composer by the Emperor Joseph II for 800 florins a year. The job required Mozart to compose music for dances for annual balls. Historical accounts suggest that the emperor’s aim was to keep Mozart in Vienna and not allow him to leave the city in search of better prospects.
By 1786, the musicians in Vienna were having a tough time as Austria was at war, and the financial capabilities of aristocracies to patronize musicians were at stake. By 1788, Mozart, along with his family, moved to the suburb of Alsergrund to cut down his rental expenses. During this time, Mozart traveled to Leipzig, Dresden, Berlin, Frankfurt, Mannheim, and other German cities in search of better fortunes. These journeys did not yield much success.
Final Years & Death
The final few phases of Mozart’s career were very fruitful. In later years, he composed numerous works, such as ‘The Magic Flute,’ ‘K. 595 in B-flat,’ ‘K. 622,’ ‘K. 614 in E-flat,’ ‘K. 618,’ and ‘K. 626.’ Mozart’s financial conditions also improved mainly because of the annuities given to him by the rich patrons in Amsterdam and Hungary. He also earned monetary benefits from the sale of dance music, which he wrote for the Imperial chamber. During his last few years, he was immensely satisfied mainly due to the success of his works, most notably ‘The Magic Flute.’
Mozart fell ill during the premiere of the opera ‘Opera La clemenza di Tito’ in 1791. Though, he continued to make public appearances, his health continued to deteriorate which eventually left him bedridden. On 5 December 1791, Mozart died at the age of 35. The cause of his death remains unclear and researchers have listed at least 118 probable causes for his death.
Legacy
Though Mozart lived only for 35 years, his legacy is unparalleled. With almost 600 musical pieces, Mozart’s influence reigns supreme in many genres of music. He worked in genres ranging from symphonies, concertos, operas, and chamber music to piano solo. He is undoubtedly one of the greatest musicians ever, if not the greatest.
Major Works
Piano Concerto No. 20 in D minor
Requiem Mass in D minor
Kyrie in F major
6 Minuets
3 German Dances, k.606