Jerry Falwell was an American televangelist and political activist. He grew up in a household that he described as a battleground between the forces of God and the powers of Satan. His grandfather was an atheist, his father was an agnostic and his mother was a devout Christian, who inspired Jerry to walk on the path to Jesus. He came to prominence first as a religious broadcaster through his 'Old-Time Gospel Hour' and then as the leader of the Moral Majority, a fundamentalist Christian political organization. He went from a Baptist preacher in Lynchburg to a powerful force in electoral politics. As much as anyone, he helped create the religious right as a political force, defined the issues that would energize it for decades and cemented its ties to the Republican Party. But his beliefs lead him to be impertinent to the LGBT community and the Muslim community. Also, he offended several Americans when he tried to segregate Christian children through his school and teaching American Celebrities
Televangelists
Political Activists
American Men
Male Activists
Childhood & Early Life
Jerry Falwell was born on August 11, 1933 in the Fairview Heights region of Lynchburg, Virginia along with his twin brother, Gene, to Helen Virginia and Carey Hezekiah Falwell.
His father was an entrepreneur and an agnostic, his grandfather a staunch atheist and his mother was a devout Christian.
He was good in studies and also excelled at sports. After passing his high school, he joined the Lynchburg College in 1950 and underwent a religious conversion in 1952.
He later transferred to Baptist Bible College in Springfield, Mo., and graduated in 1956. 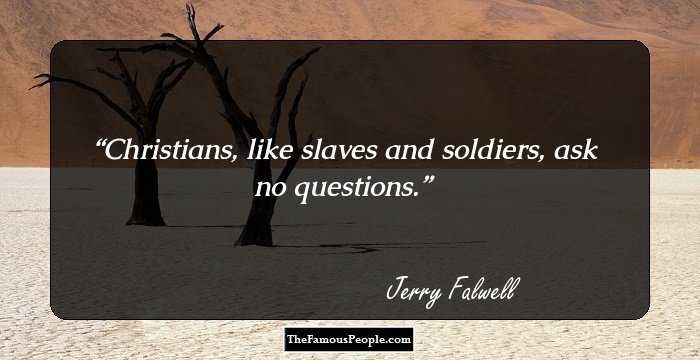 Quotes: Like
Continue Reading Below
Career
Shortly after graduation, in 1956, Jerry founded the Thomas Road Baptist Church in Lynchburg, in an abandoned building, with an initial congregation of 35 adults and their families. Their first project was scrubbing cola off the brick walls.
In 1956, he also began a half-hour radio broadcast called 'The Old-Time Gospel Hour'. In 1971, the broadcast became a TV show and with a target audience in millions.
He opposed the US public education system owing to the view that it inculcated the views of secularism, atheism and humanism in the students, which were very much against the Christian moral teachings and called for a school voucher system.
In 1967, he expressed his desire to create a Christian educational system for the evangelical youth and soon established the Lynchburg Christian Academy. The academy was a segregation academy and a ministry of the Thomas Road Baptist Church.
He founded the Liberty University in Virginia in 1971. Gradually, it became the largest university in Virginia, the largest private, non-profit university in the nation and the largest Christian university in the world.
He was a thorough Bible-fanatic and believed that reading it was the only way of laying a strong family foundation and achieving spiritual learning and guidance. The church according to him was a place for the interaction of like-minded brethren.
The Supreme Court's ruling in 1971 in the Green v. Connally stated that any private school which practiced racial discrimination was not eligible for tax exemption as they practiced and proliferated religious segregation.
Jerry established the Moral Majority political action committee during 1979 to unite the protest against US President Jimmy Carter and his rule of revoking the tax-exempt status from Christian Schools.
The committee was promoted as being pro-life, pro-traditional family, pro-moral and pro-American and by the '190s it became the largest political lobby groups for evangelical Christians.
Continue Reading Below
In the 1980 Presidential election Ronald Reagan won against incumbent Jimmy Carter by a big margin and this feat was credited to the committee and their 2/3rd white, evangelical Christians voting for him.
As the head of the committee, Jerry displayed an unwavering affection for Republican candidates and conservative politics. In a $10 million campaign with commercials for radio and TV he branded Carter as a traitor and non-Christian.
His views on America's participation in the Vietnam War were that the country wasn't fighting whole-heartedly against the North. He believed the President was 'a minister of God' and should use arms to 'bring wrath upon those who would do evil'.
Throughout his life, he remained a staunch supporter for the State of Israel and it was referred to as Christian Zionism. In his book 'Listen America' he quotes that the Jewish people are 'spiritually blind and desperately in need of their Messiah and saviour'.
In 1994 he distributed 'The Clinton Chronicles: An Investigation into the Alleged Criminal Activities of Bill Clinton' documentary, which claimed to establish a link between Clinton and a murder conspiracy involving Vincent Foster, James McDougall, Ron Brown and a cocaine-smuggling operation.
After several facts of the documentary were questioned and proved wrong, the theory of the documentary was soon discredited. Many years later, Jerry himself stated he couldn't guarantee the authenticity of the footage. 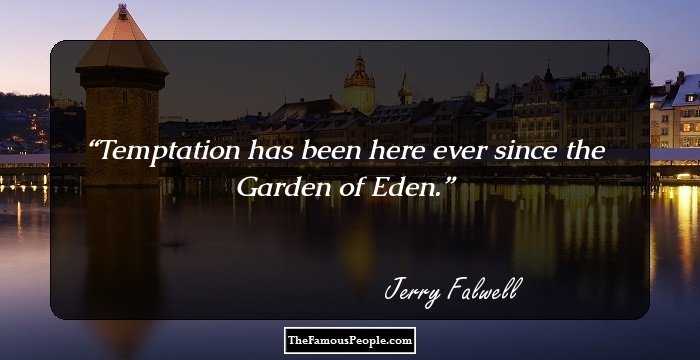 Major Works
Jerry founded the Thomas Road Baptist Church in Lynchburg in 1956 and now it is a mega church with 22000 members and also includes a day school, a live-in rehabilitation centre for alcoholics, a summer camp for children, a transportation service.
Jerry founded the Moral Majority—a political action committee—in 1979 to promote religious segregation and it grew to several million members in a short time. The committee was disbanded after having accomplished its mission.
Awards & Achievements
Jerry Falwell received three honorary doctorates in his life: Doctor of Divinity from Tennessee Temple Theological Seminary, Doctor of Letters from California Graduate School of Theology and Doctor of Laws from the Central University in Seoul, South Korea. 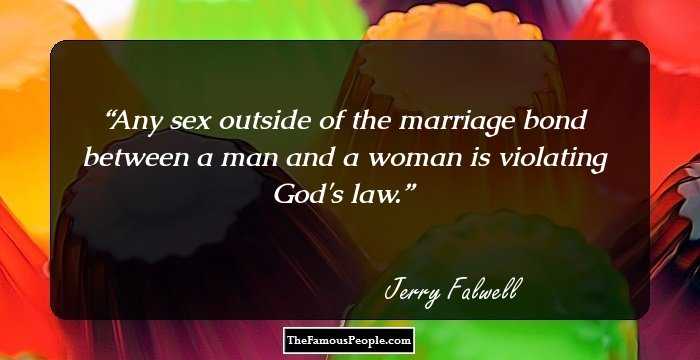 Quotes: God
Personal Life & Legacy
Jerry married Macel Pate on April 12, 1958. The couple had three children, two sons (Jerry Jr and Jonathan) and a daughter (Jeannie).
He was strongly against homosexuality a and reprimanded the addition of LGBT-friendly Metropolitan Community Church into the World Council of Churches.
He believed that Islam was a satanic religion and that their prophet Muhammad was a terrorist. Although, he apologised to the Muslims community, he didn't remove these comments from his website.
Jerry Falwell passed away due to cardiac arrhythmia or sudden cardiac death on May 15, 2007 in the Lynchburg General Hospital.
Recommended Lists:
Miscellaneous #4512
Activists #585

Quotes By Jerry Falwell | Quote Of The Day | Top 100 Quotes

See the events in life of Jerry Falwell in Chronological Order