Advanced Search
His trademark smile and his unquestionable oratory talent have won the hearts of over 7 million people worldwide. A televangelist, Joel Osteen is a famous American preacher and is the Pastor of Lakewood Church. He usually delivers sermons in sold out stadiums and sports-arenas. With his spruce good looks and his constant messages of ‘living life to full potential’, ‘living in victory’ and ‘seizing destiny moments’, Osteen is no ordinary preacher. With the number of listeners and audiences he manages to amass, he is a spiritual guru and a religious seminary on his own. After studying fleetingly at Oral Roberts University, he worked in the TV ministry until his father’s death. His works have also made it to the New York Times best-sellers list and have sold reportedly 3 million hardcover copies around the world. His detractors vary from fundamentalists to the evangelicals who claim that his ‘prosperity preaching’ is at probabilities with Jesus’ thoughts and teachings. This persistent positive spiritual leader leads over America’s largest church flock - the Lakewood Church in Houston. Kenneth Erwin H...
DID WE MISS SOMEONE?
CLICK HERE AND TELL US
WE'LL MAKE SURE
THEY'RE HERE A.S.A.P
Quick Facts

American People
College Dropouts
Pastors
Preachers
Televangelists
Childhood & Early Life
Joel Scott Osteen was born to John Osteen and Dolores, in Houston, Texas. He is one of the five children born to the couple.
At the time of his birth, his father was a Southern Baptist pastor and also the founder of the ‘Lakewood Church’.
He studied at Oral Roberts University, but did not graduate from the institution and quit it in 1981, to set up his father’s television agency and worked alongside his father as the publishing supervisor of their local Houston ministry show. 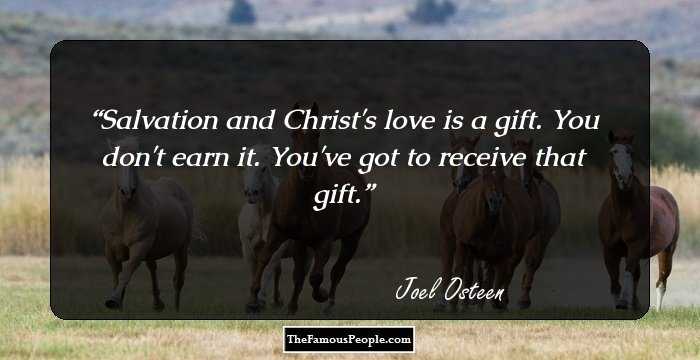 Quotes: Love
Continue Reading Below
Career
In 1992, he was ordained as a minister by Lakewood’s six-member board in a hushed ceremony.
In 1999, after his father’s sudden demise, he succeeded him as the pastor of Lakewood Church. Just a week before his father’s death, he had given his first sermon in his life.
In 2004, he authored ‘Your Best Life Now: 7 Steps to Living at Your Full Potential’, which went on to become one of his best-known works.
He and many of his Lakewood Church personnel journeyed across the nation, giving programs at large venues. In 2005, he moved Lakewood Church into the Compaq Center, which was the earlier arena for the Houston Rockets.
In 2007, the tour continued to several countries such as England, Northern Ireland, Israel and Canada. The same year, he also released his second book, ‘Become a Better You: 7 Keys to Improving Your Life Every Day’.
In 2007, a 12 minute segment on Osteen titled, ‘Joel Osteen Answers his Critics’ was aired on ’60 Minutes’. It was discovered at this point of time that his method of teaching is unorthodox.
In 2008, he authored the book ‘Daily Readings from Become a Better You: 90 Devotions for Improving Your Life Everyday’. The subsequent year, he published another book titled, ‘It’s Your Time: Activate Your Faith, Achieve Your Dreams and Increase in God’s Favor’.
In 2011, he was seen on Piers Morgan’s show, ‘Piers Morgan Tonight’, where he mentioned for the first time that he never attended a seminary and never received a divinity degree in his life.
In 2013, he became the subject of a widespread hoax.
Continue Reading Below 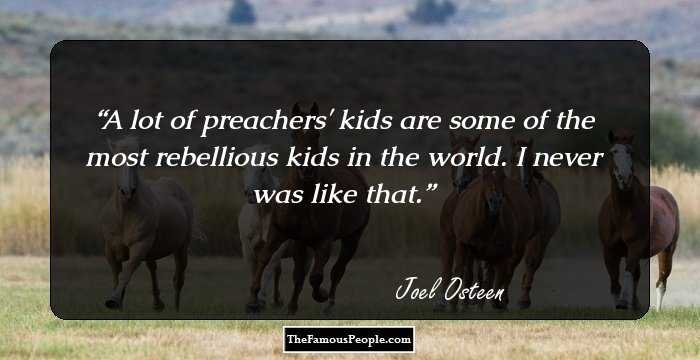 Quotes: Like
Major Works
‘Your Best Life Now: 7 Steps to Living Your Life at Your Full Potential’ was released in October 2004 and made it to the New York Time’s best-sellers list. His first publication, this is also regarded as one of his major works. Following the release of this work, he was named one of the ‘Ten most Fascinating People’ and was even ordained as ‘inspirational’ by former presidential candidate, John McCain. The book also earned the significant merit of becoming the ‘fastest-selling nonfiction book in publishing history’.
In 2007, he authored ‘Become a Better You: 7 Keys to Improving Your Life Every Day’, which made it to the best-sellers list and sold over four million copies in its first printing. This book is also regarded as one of his masterpieces which catapulted him to fame.
Awards & Achievements
He was featured on ABC News’ list of ’10 Most Fascinating People of 2006’. 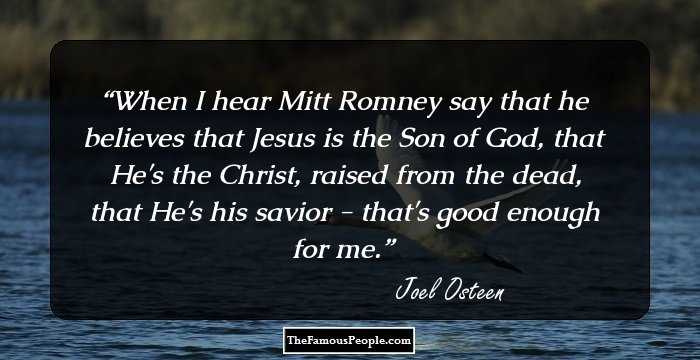 Quotes: God
Personal Life & Legacy
He married co-pastor of Lakewood Church, Victoria Osteen, in 1987. The couple has two children - Jonathan and Alexandra.
He openly claimed that he was against same-sex marriages, justifying his proclamation by quoting religious scripture that deems same-sex marriages as ‘sin’, during an interview with CNN.
Although he preached a lot about religion and succeeded his father in taking over the Lakewood church, he never studied religion or divinity as a subject.
In 2013, Osteen became the target of an epidemic of hoaxes, the most widely-known one being, ‘The Joel Osteen Hoax’.
Trivia
This famous American preacher and televangelist spent more than $90 million to renovate Lakewood Church and made it so humongous that it can now accommodate 16,000 people.

Quotes By Joel Osteen | Quote Of The Day | Top 100 Quotes

See the events in life of Joel Osteen in Chronological Order