(Political Activist, Co-Founder of the 'Youth International Party' and Member of the 'Chicago Seven')

Advanced Search
Abbie Hoffman was an American political and social activist who co-founded the Youth International Party ("Yippies"). An outspoken individual, he held strong anti-war beliefs and never shied away from expressing his discontent with the contemporary American political system. With his meticulously planned protests and disruptions, he became an icon of the anti-war movement and the counterculture era. Rebellious from a young age, he was known to be a troublemaker as a teenager—he got into fights, flouted laws, and disobeyed authority. With time he matured and began focusing his efforts on more meaningful causes rather than rebelling for the sake of it. He became involved with the Student Nonviolent Coordinating Committee (SNCC) and actively participated in the emerging Civil Rights Movement. He ventured into anti-war activism during the Vietnam War and gained popularity with his theatrical and comical stunts. His stunts also brought him at odds with the law and he was often arrested. But the routine brushes with the law did nothing to deter his passionate activism and he continued his activities even while living in hiding. He was at the height of his popularity when he took his own life, shocking his ardent admirers and the American public in general who could not believe that someone as courageous as Hoffman could actually commit suicide. American Celebrities
Political Activists
American Men
Brandeis University
University Of California, Berkeley
Childhood & Early Life
Abbot Howard "Abbie" Hoffman was born on November 30, 1936 in Worcester, Massachusetts, United States. His parents, John Hoffman and Florence Schamberg, came from a middle class background.
Since his childhood Hoffman was a troublemaker and was expelled from his sophomore year in the Classical High School due to a paper in which he presented strong communist views. He also started fights and vandalized school property.
He later enrolled at the Worcester Academy, from where he graduated in the year 1955. During these years, Marxist theorist Herbert Marcuse played an important role in the life of Hoffman and had a profound effect on his political outlook.
He then attended the Brandeis University earning a BA in Psychology in 1959 after which he went to University of California to earn his master’s degree. 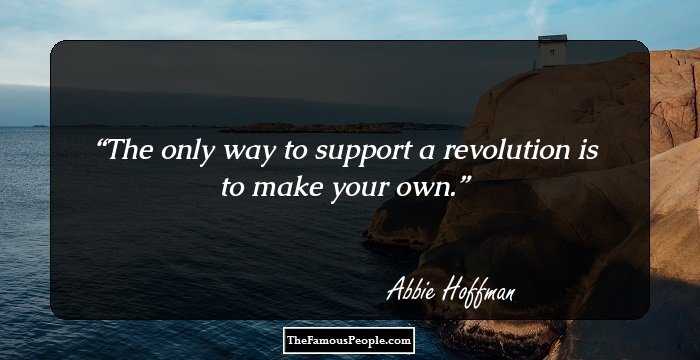 Continue Reading Below
Career
Before becoming a leading member of the Yippie movement, Hoffman was engaged with the Student Nonviolent Coordinating Committee (SNCC), which sold items to support the Civil Rights Movement in the southern United States.
During the Vietnam War, Hoffman protested against the war and the American economic and political system. He used comical and theatrical methods to express his views which gained him much popularity. An example of this was when he challenged a group of soldiers who had formed a barricade to block the Pentagon steps that he would use psychic energy to levitate the Pentagon until it turned orange and vibrated.
In August 1967, along with a dozen of confederates, Hoffman disrupted the functioning of the New York Stock Exchange by showering the trading floor with dollars, both real and fake.
Hoffman was arrested and tried for his anti-war protests against the Vietnam War as a member of the group, Chicago Seven. However, in the trials as well, he maintained his rebellious attitude and frequently targeted the judge and lawyers. He was found guilty of the intent to incite a riot and sentenced to five years imprisonment but the conviction was subsequently overturned by the Seventh Circuit Court of Appeals.
In 1969, Hoffman interrupted The Who's performance at the Woodstock in an attempt to speak against the jailing of John Sinclair of the White Panther Party.
In 1971, Hoffman gave vent to his views by penning a book titled, “Steal This Book”. Through this write-up, he encouraged readers to move to the stage at concerts and live shows and get their message across to the large audience. Also, he taught them how to live for free. Inspired by the title of the book, many people started stealing the book from the stores. Additionally, Hoffman wrote numerous other books, such as Vote!
After being underground for quite some time, Hoffman came back to visibility in November 1986, when he was arrested along with fourteen other people, for trespassing at the University of Massachusetts. However, all of them were acquitted as the jury found them not guilty.
After this, he starred in Oliver Stone's anti-Vietnam War movie, ‘Born on the Fourth of July’. The movie was released posthumously, eight months after his demise. 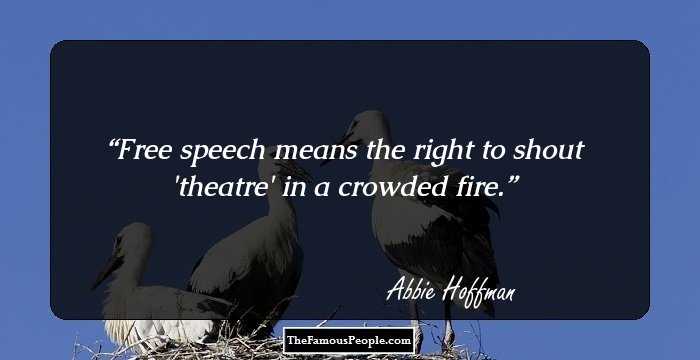 Major Works
Abbie Hoffman published a book titled ‘Steal This Book’ which exemplified the counterculture of the 1960s. He detailed in this popular book the methods and activities that could be used to fight the government and corruption. It had widespread readership and became a bestseller mainly through word of mouth.
Awards & Achievements
Posthumously, Hoffman was the recipient of the Courage of Conscience award in the year 1992. 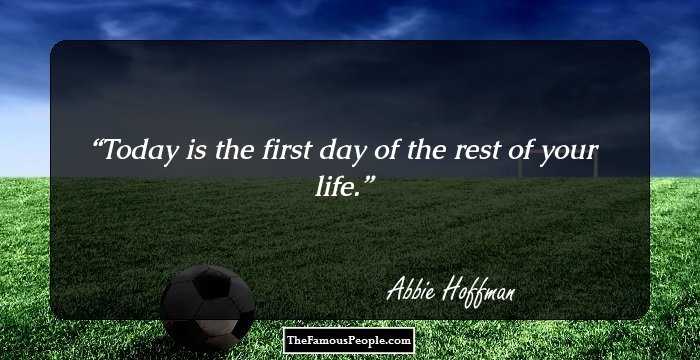 Quotes: Life
Personal Life & Legacy
Abbie Hoffman married Sheila Karklin in 1960. They had two children. The marriage however did not last long and the couple divorced in 1966.
He remarried Anita Kushner in 1967. This marriage produced one son who he named “america”, deliberately using a lowercase “a”. The couple separated in 1973—after Hoffman became a fugitive—and divorced several years later in 1980.
Diagnosed with bipolar disorder in 1980, he became depressed during the late 1980s when his mother became afflicted with cancer. He died on 12 April 1989 after swallowing 150 phenobarbital tablets and liquor. His death was officially ruled as suicide.

Quotes By Abbie Hoffman | Quote Of The Day | Top 100 Quotes

See the events in life of Abbie Hoffman in Chronological Order