An anti-lynching crusader, Ida B. Wells was an American activist who courageously spoke about democratic rights for people against racial inequalities. Because of her parents’ early death, Ida had to drop out of school, and take up a job as a teacher. While traveling on a train, despite having a first class ticket, Ida was asked to move to a car designated for African-Americans made her realize that racial segregation was prevalent despite the Civil Rights Act which banned discrimination against creed, colour or race. Ida understood the need to voice her opinion and took up writing articles in various newspapers and magazines about racial inequality. She had to forego her job as a teacher as she was vocal about the injustice meted out to colored students in schools. An incident where three businessmen were lynched by a white mob, urged her to speak against this practice, and as a result of this her newspaper office was vandalised. There were death threats, but Ida spoke against lynching in public forums and also tried to influence the reformed whites which eventually brought her anti-lynching crusade to White House. She was also personally responsible for establishing a number of associations which upheld the values of civil rights, and spoke against racial discrimination in government offices Maria Shriver
16th July In History
DID WE MISS SOMEONE?
CLICK HERE AND TELL US
WE'LL MAKE SURE
THEY'RE HERE A.S.A.P
Quick Facts

Cause of Death: Uremia

American Celebrities
African American Women
African American Authors
Journalists
Black Activists
Childhood & Early Life
Ida was born on July 16, 1862 in a family of slaves at Holly Springs in Mississippi. It was a large family and her parents were able to support them, because of her mother’s culinary skills and her father’s expertise as a carpenter. The end of Civil War freed the family from slavery, but Mississippi was notorious for racial discrimination and Ida faced it every day.
Ida went to Shaw as well but was expelled due to her confrontational behavior
In 1878, when she was visiting her grandmother in the Mississippi Valley, Holly Springs suffered a yellow fever epidemic in which both her parents and her 10-month-old brother, Stanley, died. There was no one else to support her large family.
Ida convinced the management of a county school and took up a job as a teacher to support her family at the tender age of 18.
In the year 1882, Ida went to stay with their aunt in Tennessee, along with her siblings. During her summer vacations, she attended the Fisk University. 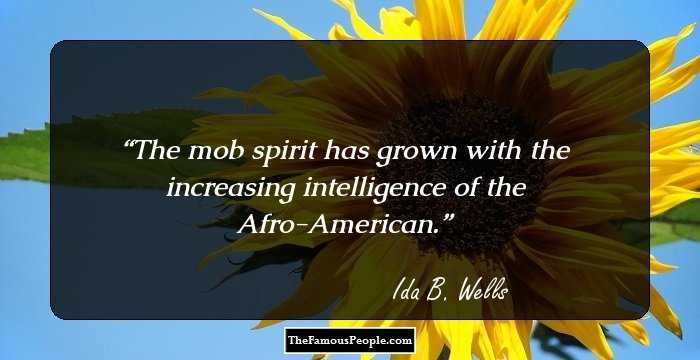 Black Journalists
Social Reformers
Black Miscellaneous
Civil Rights Activists
Career
In the year 1884, an incident onboard a train changed her life forever. Despite having a first class ticket, Ida was asked to move to a car designated for African-Americans. She was moved out of the first class compartment forcibly which was illegal under Civil Rights Act. Ida made an appeal in a lower court and got a $500 settlement against the railway company. However, the victory was short-lived as Ida lost the case in Supreme Court.
This incident prompted Ida to write about the racial prejudice that was rampant in different parts of the country. After some time, Ida owned the newspapers ‘Headlight’ and ‘Memphis Free Speech’. Later she also owned ‘Free Speech’.
During this time, she also worked as a teacher in a segregated school. However, being vocal about the deplorable condition of the coloured people in school, she lost her job in 1891.
In the year 1892, Ida raised her voice against a lynching episode that took place in Memphis. Thomas Moss, a friend of Wells, operated a grocery shop in the outskirts of Memphis, which was invaded by a white mob. During the altercation, three white men were shot and injured. As a result of this, Moss along with two other friends, was jailed pending trial but a large white lynch mob stormed the jail and killed the three men.
This lynching incident made Ida to travel in the southern parts and collect information and research about lynching incidents. After an article published in newspaper, a white mob destroyed everything in her newspaper office and issued a death threat. Fortunately, Ida was travelling to New York, but she could not come back to Memphis because of the threats.
She continued to write about lynching in a newspaper called the New York Age. This was run by a former slave T. Thomas Fortune.
To garner support for her cause among the whites, she started a lecture tour in 1893. The same year, she wrote against the ban of African-American exhibitors in World’s Columbian Exposition.
In the year 1895, she published her personal account of lynching in ‘A Red Record’. Till date this is considered as one of the most truthful and honest accounts of the history of lynching that happened in the Americas even after the passing of the Civil Rights Act.
In the year 1898, Ida took her protest to White House demanding President William McKinley to introduce necessary reforms to end lynching.
Continue Reading Below
To continue on the path of civil rights activism, she established the ‘National Association of Colored Women’ in 1896.
In 1908, she protested vehemently against assaults on the African-American community in Illinois. Later that year, she attended a conference which would eventually lead to the formation of NAACP or National Association for the Advancement of Coloured People. She later came out of the organization, as she felt that there was lack of action-based moves.
Ida worked for women’s welfare and participated in National Equal Right League. The demand of the league was to end discrimination in government jobs. During these years, she also established the kindergarten for children, the first of its kind in the African-American community and also spoke in favour of women suffrage.
In the year 1930, she also fought for a seat in the Senate without any success. 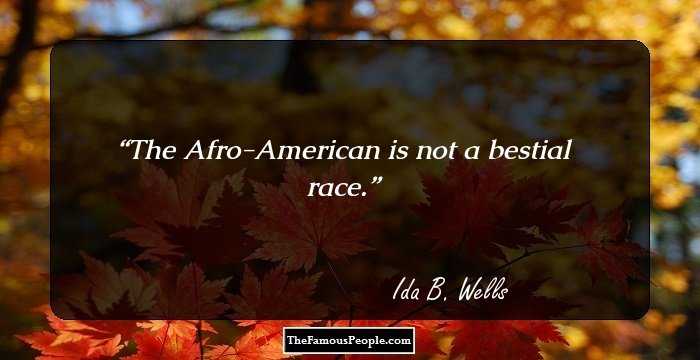 Black Media Personalities
Black Civil Rights Activists
American Women
Fisk University
Major Works
Ida published a pamphlet of 100 pages known as the ‘Red Record’. This is considered as a seminal text in the history of coloured people as it showed statistics and concrete data about American lynchings.
Recommended Lists:

Women Activists
Women Journalists
American Activists
American Journalists
Personal Life & Legacy
Ida had married Chicago-based editor and lawyer Ferdinand Barnett. In fact, she hyphenated her surname with a Barnett, a practice quite uncommon in her times. They had four children.
She died as a result of kidney failure on March 25, 1931 in Chicago, at the age of 68.
Her speeches, writings and protests document a long history of battle against social injustice and racial prejudices. 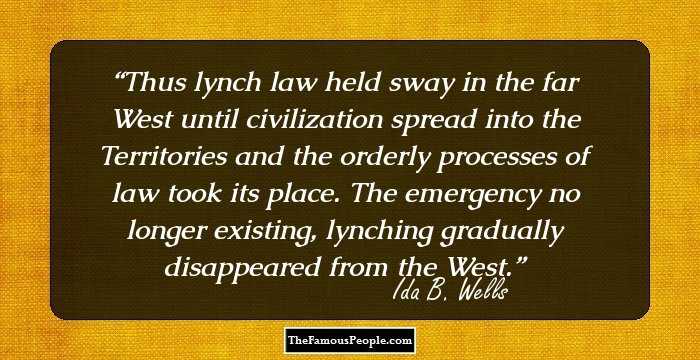 Women Social Reformers
American Women Activists
Women Media Personalities
American Social Reformers
Trivia
Her life is the subject of Constant Star (2006), a widely performed musical drama by Tazewell Thompson.
In 1941, a public housing project was built by the Public Works Administration (PWA), Chicago, and was named the Ida B. Wells Homes in her honor.
Molefi Kete Asante, the well-known African-American professor, included Wells in his list of '100 Greatest African Americans' in 2002.
Recommended Lists:

See the events in life of Ida B. Wells in Chronological Order