(Greek Philosopher Who is Credited as the Founder of Western Philosophy)

Advanced Search
Socrates was one of the most influential Greek philosophers of the ancient era. He was born in the fifth century BC in the city of Athens. His father was a stone mason and hos mother was a midwife. Not much is known about his early years except that he joined his father’s trade and thrice participated in the Peloponnesian War as a citizen soldier. Later he started exploring philosophy and very soon gathered a loyal band of disciples, among whom most well-known are philosopher Plato, historian Xenophon, the founder of the Cynic school, Antisthenes and the founder of the Cyrenaic school, Aristippus. Although a renowned teacher, Socrates had not left anything in writing. Whatever we know about him or his teachings come from the writings of Plato and Xenophon. He was unique man, who did not care for class distinction or proper behavior. He would move around the city, barefooted and unwashed, asking questions, discussing answers and thus reaching the truth through a unique procedure, we now call ‘Socratic Method’. However, because of his nonconformity to the local traditions, he also created many enemies, who accused him of corrupting the youth. Sentenced to death, he died gracefully by drinking brewed hemlock. Greek People
Greek Male
Male Philosophers
Greek Philosophers
Greek Intellectuals & Academics
Childhood & Early Life
According to Greek biographer, Diogenes Laërtius, Socrates was born on "the sixth day of Thargelion”. However, the exact year of his birth is not known. Historians believe that he was born sometime between 471 and 469 BC, majority of them holding 470 BC as his birth year.
He was born in Alopece, a suburb located just outside the city wall of Athens, into the Antiochis tribe. According to tradition, his father, Sophroniscus, was a stone mason or a sculptor, a fact that is often doubted by modern scholars.
His mother, Phaenarete, was a ‘maia’, which loosely translated means a midwife. Since the role of a maia was generally performed by women from good family, it is believed that her family had a higher status than that of Sophroniscus.
Socrates was possibly his parents’ only child. However, he had a half-sibling named Patrocles, born out of his mother’s second marriage to Chaeredemus. Apart from that little is known about his family background or childhood.
Since he was not from a noble family, it has been assumed that he joined his father’s profession after acquiring basic education. It was traditionally believed that the statues of the Charites, which stood near the Acropolis, were crafted by him. However, modern scholars refute such an idea.
As a young man, Socrates is believed to have shown a thirst for knowledge, acquiring the writings of Anaxagoras, a leading contemporary philosopher. According to his disciple Plato, he also studied rhetoric with Aspasia, the talented mistress of the great Athenian leader, Pericles.
As required by the Athenian law, Socrates also served as hoplite or citizen soldier at the Peloponnesian War (431–404 BC), fighting with shield, long spear and face mask at Delium, Amphipolis, and Potidaea. In 432 BC, at Potidaea, he saved the life of popular Athenian general, Alcibiades.
During the war, he showed tremendous courage, a trait that remained with him for the rest of his life. In between fighting in the war, he returned to Athens, where he continued with trade. Concurrently, he started exploring philosophy. 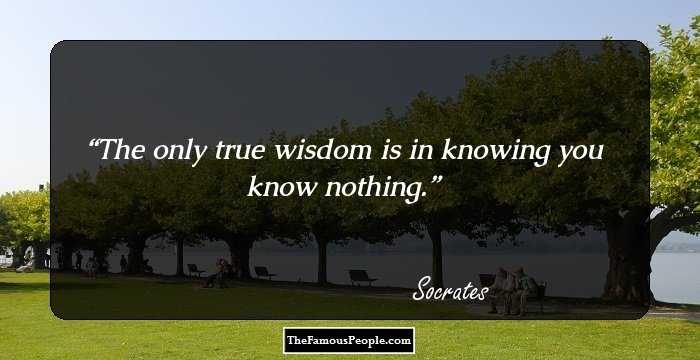 Quotes: You
Continue Reading Below
Philosopher & Teacher
It is not known why or when Socrates started his intellectual pursuit; but according to Xenophon, he soon started visiting the workshops surrounding the central public space to meet the merchants there. Here, he met Simon the Shoemaker, who later became his disciple and wrote his first ‘Dialogue’.
Socrates had a unique teaching method. Instead of lecturing, he would ask questions and then discuss possible answers. They would lead to further questions and eventually to further answers and finally into a deeper understanding of the subject. The process later became known as ‘Socratic Method’
Gradually, he started becoming popular, especially among the city’s youth, gathering around himself select band disciples, most famous of them being philosopher Plato and historian Xenophon. Slowly, he began to ignore his original trade, devoting himself entirely to philosophy.
There is confusion about how he supported himself in this later phase of his life. While Xenophon and Aristophanes wrote that he accepted payment from his students, Plato had refuted the charge, citing his poverty as proof. His wife was also known to complain about his lack of money.
In 423 BC, he became known to the broader public through Aristophanes’ play, ‘Clouds’. In this caricature, he was depicted as a scruffy and untidy fool, whose philosophy amounted to teaching how to get out of debts. While the second part was unfair, he indeed cut a strange figure in Athens.
With long hair, upturned nose and bulging eyes, he moved around the city, barefooted and unwashed, asking questions to the elite and to the commoners alike, seeking to arrive at the truth. His young disciples enjoyed the debates, relishing the fact he always defeated those who were considered wise.
In spite of his fame and popularity, Socrates did not consider himself wise. Therefore, he was surprised when his friend Chaerephon asked the famous Oracle at Delphi if there was anybody wiser than Socrates and the Oracle answered that there was none wiser than him.
To prove the Oracle wrong, he now started asking questions to those who were perceived to be wise. Shortly, he came to the conclusion that he was wise because he knew that he was ignorant while those who thought themselves wise did not know it and so they were fools. 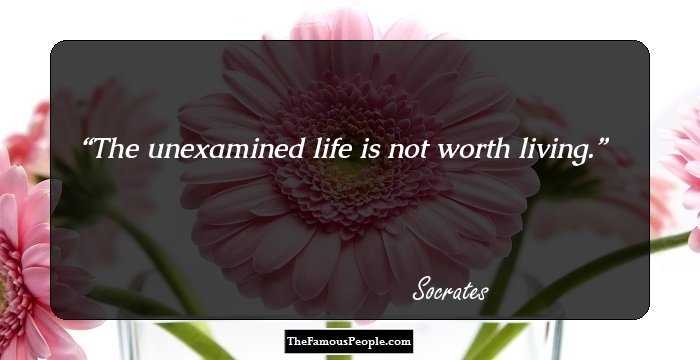 Quotes: Life, Living
Continue Reading Below
Politics
Socrates had always stayed away from politics. But in 406 BC, he was made a member of the boule, which in ancient Greece was a council consisting of 500 citizens entrusted with running the daily affairs. This was the only known instance of him holding public office.
During his tenure, the generals of Athenian army were brought to trial allegedly for failing to rescue surviving sailors during a storm. In the first round of the trial the generals won sympathy.
Before the second round began, it was decided that the assembly should vote on their guilt or innocence without further debate. The decision, although unconstitutional, was taken on political compulsion. It was important for the ruling elite to blame somebody for their defeat in the Peloponnesian War.
By chance, Socrates was the epistates, the supervisor of the debate, on the day that the generals were put to final trial. Although he tried to save them, declaring that he would do nothing which was against the law, his attempt was outmaneuvered and the generals were executed.
When in 404 BC, the Oligarchy of Thirty came to power they started feeling threatened by Athenian general, Leon of Salamis. To put him out of their way they ordered Socrates and four others to bring Leon from Salamis to Athens so that he could be put to death.
Socrates, whose whole concern was not to do anything unjust or impious, refused to obey the order and went home. In Plato’s ‘Apology’, it had been said that he could have been put to death for this disobedience. He was simply saved because the government fell shortly thereafter.
Trial & Death
After the fall of the Oligarchy, democracy was established in Athens. Instead of accepting it, Socrates started finding faults with the system, questioning the common notion that ‘might make right’. It was held that he was against democracy because Critias, the worst tyrant in the Oligarchy, was his former student.
Earlier, he had also made secret enemies by making many important people look like a fool. Influenced by him, many young men had also disappointed their parents by giving up the road they had wanted them to take. They now decided to take revenge.
In 399 BC, Meletus the poet, Anytus the tanner, and Lycon the orator, accused Socrates of “denying the gods recognized by the state and introducing new divinities” and “of corrupting the young”. They charged that he had also corrupted the mind of Critias, demanding death sentence for that.
Continue Reading Below
There were also many personal reasons for bringing in the accusation. For example, Anytus had been grooming his son for a life in politics; but the boy became interested in Socrates' teachings and abandoned political pursuits.
Socrates decided to defend himself, refusing help from famous speechwriter, Lysias. Instead of trying to prove his innocence and beg for mercy, he cast himself in the role of Athens' 'gadfly' - somebody who annoys or criticizes others in order to keep them aware and active.
What Socrates said in self defense was later recorded by Plato in his ‘Apology of Socrates’. Xenophon’s ‘Apology of Socrates to the Jury’ also deals in the same subject.
While his defiant tone made the jury uneasy, their mood was hardened during the deliberation of the punishment. When called for proposing an alternative punishment, Socrates suggested that he should be honored for awakening their mind and be maintained in the Prytaneum, a place reserved for Olympic heroes.
At the end of the trial, Socrates was sentenced to death by a vote of 280 to 221. As a religious festival was about to begin, the punishment was deferred for one month. While his well-wishers and students pleaded him to escape, he remained in Athens, waiting for death. 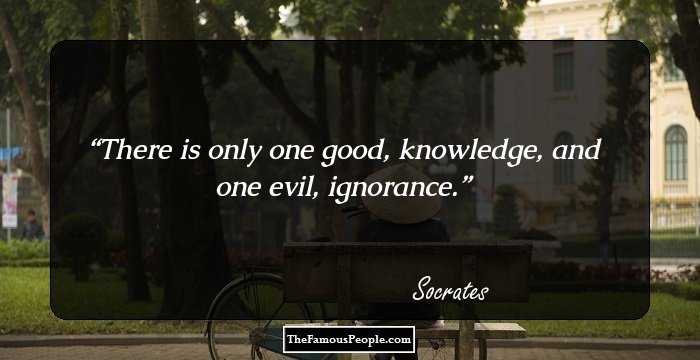 Major Works
While Socrates is best known for his method of teaching, now called ‘Socratic Method’, he is equally famous for his view that philosophy should produce practical results, bringing in greater well-being for the people. He tried to establish an ethical system rather than any theological doctrine.
He believed that human choice was driven by a wish to be happy and the ultimate happiness comes from knowing oneself. Therefore, he tried to remove their false belief through dialogues; thus making them aware of their ignorance, which in turn, helped them to discover the truth about themselves.
Personal Life & Legacy
Socrates married Xanthippe, who is especially remembered for complaining about lack of money. They had three sons, Lamprocles named after Socrates’ maternal grandfather, Sophroniscus named after his father and Menexenus.
Socrates spent the last month of his life imprisoned in Athens. His well-wishers proposed to bribe the guards so that he could escape. But Socrates refused mainly because it would indicate he feared death, which no true philosopher should. Moreover, as a loyal citizen he respected Athenian laws.
On the day of his execution, he was handed over a cup of brewed hemlock, which he was ordered to drink. Socrates calmly drank the poison and then as ordered by the guards, started walking around the room until his feet became numb. Thereafter, he lay down, calm and happy.
As he lay down surrounded by his friends, waiting for the poison to reach his heart, he is believed to have reminded his friend, Crito of Alopece, “We owe a rooster to Asclepius. Please, don’t forget to pay the debt.” These are believed to be his last words.
The cave in which he was held prisoner and died exists till today. Of late, his statue has been erected in front of the Academy of Athens. Moreover, his busts are on display in many museums across the world, such as the Vatican Museum, Palermo Archaeological Museum and the Louvre.
Trivia
The first ‘Socratic Dialogue’ was written not by Plato or Xenophon, but by Simon, the Shoemaker. However, the volume was small enough to fit under the length of two Stephanus pages.
’Socratic Dialogue’, written by Plato and Xenophon, reveals more about Socrates. Both these books recorded Socrates’ teachings through dialogues, thus illustrating what we now know as Socratic Method.

Quotes By Socrates | Quote Of The Day | Top 100 Quotes

See the events in life of Socrates in Chronological Order