Anaxagoras of Clazomenae was an ancient Greek philosopher credited to be the first person to bring philosophy into Athens. He was a philosopher of nature and is best remembered for his cosmology. Even though ancient Greece had given birth to several great minds like Pythagoras even before Anaxagoras’ time, it was Anaxagoras who introduced the concept of philosophy to the Athenians. He was born in Ionia where he spent his early life observing nature and studying natural elements and forces. Such was his love for the sciences that in spite of hailing from a wealthy family he renounced all the riches and dedicated his life to gaining and imparting knowledge. Even though he lived thousands of years ago, he accurately stated that the moon did not produce its own light, but reflected the sun’s light. He claimed that the sun was a mass of molten metal and had correctly given the reason behind the occurrences of eclipses. He moved to Athens—the center of Greek culture—around 480 BC and played a pivotal role in influencing the scientific and cultural development of the city. He is believed to have written several texts though only a few fragments of his works have been preserved. Plutarch
Philosophers #237
Intellectuals & Academics #513
Continue Reading Below
DID WE MISS SOMEONE?
CLICK HERE AND TELL US
WE'LL MAKE SURE
THEY'RE HERE A.S.A.P
Quick Facts

Greek People
Male Philosophers
Greek Philosophers
Greek Intellectuals & Academics
Childhood & Early Life
Anaxagoras was born around 510 BC in Clazomenae, Ionia. He hailed from an aristocratic and wealthy family.
Not much is known about his early life except for the fact that he was blessed with a brilliant mind and had an unquenchable thirst for knowledge. He probably spent his youth in Ionia, learning about new things and becoming interested in the scientific study of the world.
Realizing that his life’s purpose was to search for knowledge, he renounced his riches and devoted himself to science. 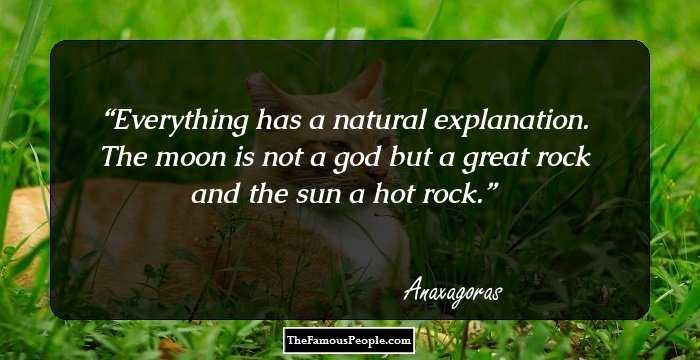 Who Is The Greatest Female Warrior In History?
Later Life
He moved to Athens around 480 BC. Although many great philosophers including Pythagoras had been born in Ionia, the new study of philosophy was alien to Athens.
Anaxagoras introduced the concept of philosophy to Athenians. During his lifetime Socrates, who would one day become a major philosopher himself, was a young boy. Thus Anaxagoras is considered to be an eminent philosopher of the Pre-Socratic period.
Athens at that time was fast developing as the center of Greek culture, and Anaxagoras played a significant role in the scientific and cultural developments of that period.
During his stay in Athens, Pericles rose to power. Pericles was a prominent statesman and general of Athens who had a profound influence on the Athenian society. He took a liking to Anaxagoras and was impressed by his pursuit of scientific enquiry.
Even though Anaxagoras and the would-be philosopher Socrates both lived in Athens, there are no accounts to suggest that the two ever met. However, there are reports that Archelaus, one of the pupils of Anaxagoras later became the teacher of young Socrates.
Anaxagoras brought philosophy to Athens, kindling in the Athenians a love for scientific knowledge and enquiry. He observed the celestial bodies and formed new theories of the universal order.
He tried to explain the scientific reasons behind natural occurrences like eclipses, rainbows and meteors. In fact he gave an amazingly accurate description of why eclipses take place.
During his days, the sun was worshipped as a god. He sought to dispel this belief and claimed that the sun was a mass of red-hot metal. He also correctly told that the stars were similar to the sun but their heat could not be felt on earth due to their enormous distance from the planet.
He was the first philosopher to state that the moon reflects the sun’s light. He was of the belief that there are mountains on the surface of the moon and that it was inhabited.
Anaxagoras was a genius and applied geometry to the study of astronomy. He was among the first individuals to give the correct explanation for the occurrences of eclipses.
He lived for 30 years in Athens, studying and disseminating knowledge. However, his claim that the sun was not a god but a fiery ball of hot metal enraged certain social and political parties and thus he was prosecuted on a charge of impiety.
His long time admirer and friend Pericles spoke in his defense at his trial around 450 BC. Though Pericles managed to save him from a harsher punishment, Anaxagoras was forced to leave Athens.
He had written a book of philosophy, the fragments of which were preserved in the work of Simplicius of Cilicia in the 6th century AD.
Major Works
The Pre-Socratic philosopher Anaxagoras is credited to have introduced the Athenians to the concept of philosophy. His contributions to the field of cosmology have been immense as he was probably the first person to state the correct reason behind the occurrence of eclipses.
He claimed that the sun was not a god as people of his time believed, but a heavenly body composed of blazing metal. This observation of his led to him being charged of impiety.
Personal Life & Legacy
After being forced to leave Athens, he went to Lampsacus where he spent his last years. He died around 428 BC.
An altar to Mind and Truth was erected in his memory by the citizens of Lampsacus who observed his death anniversary for years.
You May Like

See the events in life of Anaxagoras in Chronological Order