Henry Wadsworth Longfellow was a celebrated nineteenth century American poet, remembered for such works as The Song of Hiawatha and Paul Revere’s Ride. From his early childhood, he showed an interest in literature and although his father wanted him to become a lawyer, by the time he was in college he knew that if he ever succeeded in life, it would be only in that field. Eventually, Henry Wadsworth Longfellow joined his alma mater as a professor of French, Spanish and Italian, before being appointed to the Smith Professorship of Modern Languages at Harvard College. Although by then he had started publishing his works, his actual creative life began in Cambridge and for next fifteen years, he wrote all the works on which his extraordinary fame came to rest. However, after the accidental death of his second wife, he produced few original works and instead concentrated on translation; Dante’s Divine Comedy being one of them.

Art Garfunkel
DID WE MISS SOMEONE?
CLICK HERE AND TELL US
WE'LL MAKE SURE
THEY'RE HERE A.S.A.P
Quick Facts

His father, Stephen Longfellow, was a lawyer and a Member of the US Congress. His mother, Zilpah nee Wadsworth, was the daughter of Peleg Wadsworth, a noted general in the American Revolutionary War.

Born second of his parents' eight children, he had an elder brother named Stephen. Younger to him were four sisters named Elizabeth, Anne, Ellen and Mary and two brothers, Alex and Samuel. Samuel Longfellow grew up to be a well-known clergy and hymn writer.

A few months after he was born, Henry’s family moved to his maternal grandfather's house at 489 Congress Street, where he spent rest of his childhood. As a boy, he had a lively imagination as well as a thirst for learning. By the age of three, he had learned most of the alphabets.

At the age of five, he began his schooling at Portland Academy, where he focused on language and literature. During this period, he started writing, planning elaborate writing projects with his friends. His mother too encouraged his quest for knowledge, introducing him to English classics like Robinson Crusoe and Don Quixote.

According to his brother Samuel, he was a lovely and merry boy, who joined ball games, loved kite-flying, swimming, snowballing, coasting, and skating. Young though he was, the naval battle of 1813, which took place off the coast of Maine, greatly affected him.

On November 17, 1820, he anonymously published one of his poems, The Battle of Lovell's Pond, in the Portland Gazette. Although he was sad to hear his father criticizing the work, he continued with his literary pursuit, hoping to make his career in literature.

In 1822, he and his brother Stephen entered Bowdoin College in Brunswick in their sophomore year. There he joined the Peucinian Society and mixed with the academically bright students. During this period, his verses began to appear in national magazines.

Although his father initially wanted him to become a lawyer, he was not blind to his son's aspirations. He used his influence to secure him a professorship in modern European languages at Bowdoin. But the condition was that he must first study in Europe.

Longfellow graduated in 1825 and left for Europe In May 1826, traveling across France, Spain, Italy, Germany and England, before returning home in August 1829. During this period, he mastered French, Spanish and Italian and might have also picked up some Portuguese, and German.

While in Europe, he also spent time with many renowned authors including Washington Irving, who encouraged him to write. Out his travel experience in Europe came his first book, Outre-Mer: A Pilgrimage Beyond the Sea. Initially published in serial form, it would later be published in book-form in 1835. 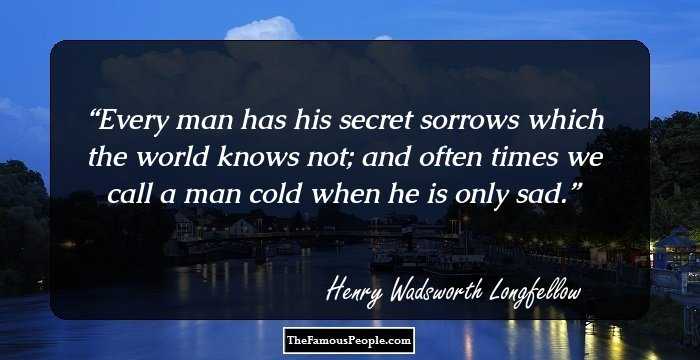 On returning home in 1829, Henry Wadsworth Longfellow began his career as a professor of modern European languages at his alma mater, teaching, French, Spanish and Italian for a salary of $800. Concurrently, he also received an additional $100 for working as the college's librarian for one hour each day.

During this period, he translated and published six foreign language textbooks. He also wrote essays and translated poems from French, Italian, and Spanish, publishing his first work, Coplas de Don Jorge Manrique, in 1833.

In December 1834, he was offered the Smith Professorship of Modern Languages at Harvard College, with a stipulation that he must first spend a year or so abroad.  Dissatisfied with the life at Bowdoin, he accepted the offer and left for Europe, studying German as well as Dutch, Danish, Swedish, Finnish, and Icelandic.

In December 1836, he returned home to take up his new post. The department consisted of four professors teaching Spanish, French, Italian, and German. But whenever a position was vacant, Longfellow had to fill in. Although the situation frustrated him, he continued with the job for next fifteen years.

In 1839 he published his second book, a thinly veiled autobiographical work called Hyperion. A romantic novel idealizing his European travels; it initially met with lukewarm or even hostile critical response. However, he remained confident.

Also in 1839, five months after the publication of Hyperion, he published his first collection of poems. Entitled Voices of the Night, it was received enthusiastically by the readers and so was his next work, another collection of poems called Ballads and Poems, published in 1841.

As his popularity began to grow, he published his third book of verse, Poems on Slavery, In 1842. Although the work was meant to support the antislavery movement, the poems were very mild. However, the New England Anti-Slavery Association was satisfied enough to reprint the collection for further distribution.

Continuing to work, write and publish, Henry Wadsworth Longfellow remained at the Harvard College till 1853. Among his better-known works of this period were Evangeline, A Tale of Acadie (1847), an epic poem set during the time of the Expulsion of the Acadians and Kavanagh (1849), a novel based on country romance.

In 1854, he resigned from Harvard to devote himself to writing, thus becoming one of America's first self-sustaining authors. For the next seven years, he wrote unimpeded, publishing works like The Song of Hiawatha (1855), The Courtship of Miles Standish and Other Poems (1858) and Paul Revere’s Ride (1861).

In July 1861, his wife passed away in a horrific accident. His son too left home without his permission to participate in the Civil War. Devastated, he published nothing for next two years, trying to find solace in reading Dante’s Divine Comedy.

By 1863, he had gained enough control over himself to publish Tales of a Wayside Inn. However, it contained very few new works, Most of the poems, including Paul Revere’s Ride, were written before his wife's death.

By 1865, his fame had spread all over the English-speaking world. In London alone, twenty-four different companies were publishing his work. Many of his works were being translated too. However, he himself wrote few original works now, instead concentrating more on translations.

From 1866 until his death in 1882, Longfellow published seven more books of poems as well as few other works. Among the latter group, more significant were his translation of Dante’s Divine Comedy (1867) and Christus: A Mystery (1872), a trilogy dealing with Christianity from its beginning. 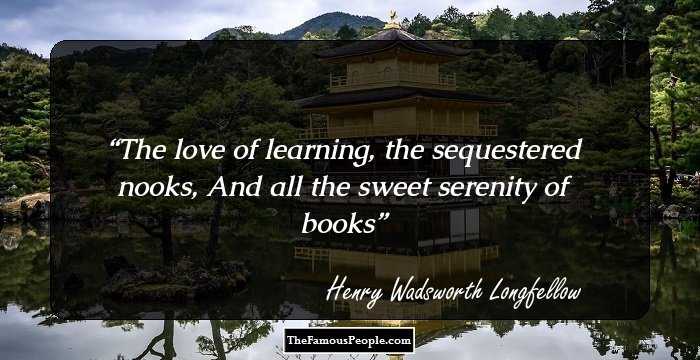 Henry Wadsworth Longfellow is possibly best known for his 1855 epic poem, The Song of Hiawatha. Set at Pictured Rocks, and complete in 22 chapters, the story revolves around an Ojibwe warrior named Hiawatha and his lover, a Dakota woman called Minnehaha. The work was an immediate success and by 1857 sold 50,000 copies.

Paul Revere’s Ride, which commemorates the heroics of Paul Revere on April 18, 1775, is another of his well-known works. First published in the Atlantic Monthly in January 1861, it was later included in his 1863 collection, Tales of a Wayside Inn, as The Landlord's Tale.

On September 14, 1831, Henry Wadsworth Longfellow married Mary Storer Potter, a childhood friend from Portland. In October 1835, while the couple was on their trip to European, she had a miscarriage and died on November 29, 1835 after several weeks of illness. She was then 22 years old.

In 1836, while in Switzerland, he met Frances Elizabeth Appleton and proposed to her; but at that time, she was not interested in marriage. They were ultimately married in 1843 and had six children, Charles Appleton, Ernest Wadsworth, Fanny, Alice Mary, Edith, and Anne Allegra. On July 10, 1861, Frances died in a fire accident.

Henry Wadsworth Longfellow died on 24 March 1882 after a short illness. He is buried with both of his wives at Mount Auburn Cemetery in Cambridge, Massachusetts.

In 1884, Longfellow became the first non-British writer who had a commemorative bust placed in Poet's Corner of Westminster Abbey, London. In 1909, his statue was unveiled in Washington, DC.

In March 2007, the United States Postal Service issued a stamp commemorating him.

The Wadsworth-Longfellow House, where he spent his youth, has been designated a historic house and turned into museum. 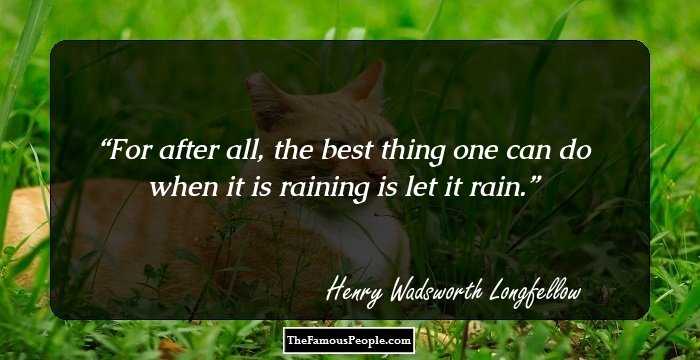