Wendell Erdman Berry is a famous American author, critic and farmer who helped people in diagnosing the nature and the range of the problems faced by them in a constructive way. He is a keen environmental activist who has highlighted the problems of soil loss and degradation, toxic pollution, fossil-fuel dependency and the destruction of rural communities. Berry’s writings were based on ecologically sound way of life and revived the connection between people and nature. He defined patriotism in a new way as the love for the land under one’s feet and for those who live upon it. His goal is to bring health to the environment through responsible agriculture and according to him that is the only permanent way to restore the depleted earth. He explored three major themes: agriculture, its history and present condition; marriage and domesticity; and the uses of education. Berry had an unorthodox academic career as he focused on a less-noticed theme, the historical evolution of the land, which is a formative and crucial element of nearly every nation. His novels portray America’s rural history and his essays on ecological responsibilities developed from his own experience as a farmer.

Alice Walker
Poets #138
Writers #981
DID WE MISS SOMEONE?
CLICK HERE AND TELL US
WE'LL MAKE SURE
THEY'RE HERE A.S.A.P
Quick Facts

American People
American Men
Leo Poets
Leo Writers
Male Poets
Childhood & Early Life
He was born to John Marshall Berry, a lawyer and official with the Burley Tobacco Growers Association; and his wife Virginia Erdman Berry. His family had a rich farming history which played a pivotal role in shaping up his thoughts as a child.
He enrolled in a secondary school at Millersburg Military Institute in 1948 from where he graduated after four years.
In 1952, he got admitted to University and passed out in 1957 after earning his Bachelor’s and Master’s degree in English literature. 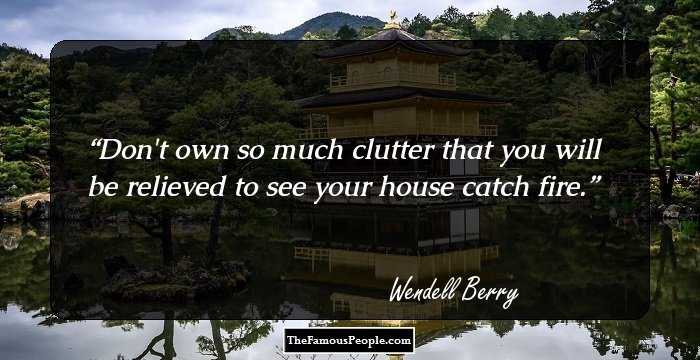 The Hottest Male Celebrities With The Best Abs
Career
In 1957, he began teaching English at Georgetown College after completion of his studies, and soon after he entered Stanford University where he studied creative writing as a Wallace Stegner fellow.
During 1959–60, he taught creative writing at Stanford University and it was this time when he published his first novel ‘Nathan Coulter’ which was the first title in Port William series. It carries a brief description of the rural section of Kentucky, a place with which he had a lifelong fascination.
In 1961, he went to Italy and France on a Guggenheim Foundation fellowship. There he met Wallace Fowlie, an American writer, translator and professor of Literature.
During 1962–64, he taught English to freshman at University Heights Campus in the Bronx at New York University. At the end of it, he began teaching creative writing at the University of Kentucky, Lexington. It was during this time that he met writer Guy Davenport, writer and mystic Thomas Merton, and photographer Ralph Eugene Meatyard.
In 1964, he published his first poetry book called ‘November twenty six nineteen hundred sixty three’. It contained a single poem memorializing the death of the President John F. Kennedy.
In 1965, he moved to Lane’s Landing farm near Port Royal, Kentucky where he wrote and farmed extensively. Its description can be found in his essays: ‘The Long-Legged House’ and ‘A native Hill’.
During 1970s and early 1980s, he edited and wrote for Roadale—an American publisher of health and wellness magazines and books..
In 1987, he returned to the English Department of University of Kentucky to teach courses in Literature and Education. In the same year he received an honorary doctorate from Santa Clara University and was appointed as a writer in residence by Becknell University, Lewisburg, Pennsylvania. 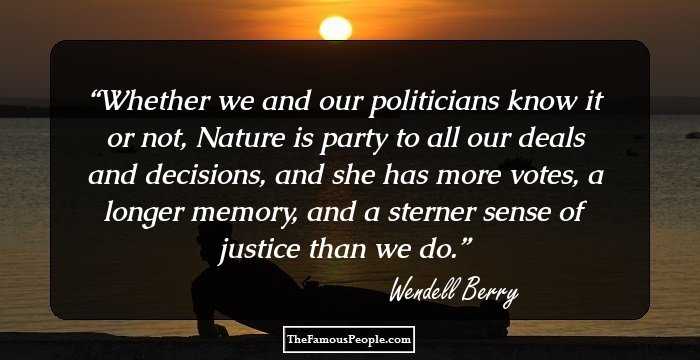 Quotes: Nature
Continue Reading Below
Major Works
On February 9, 2003, his essay, ‘A Citizen's Response to the National Security Strategy of the United States’, was published as a full page advertisement placed by ‘Orion Magazine’ in the New York Times
On January 4, 2009, he published an open edition article titled ‘50-Year Farm Bill’ in New York Times along with the president of the Land Institute, Wes Jackson. It concentrated chiefly on the National Agricultural Policy based on ecological principles. Soon in July, he travelled to Washington DC for its promotion among the general as well as rural public.
In October, 2009, he appealed for the cancellation of construction of a coal-burning power plant in Clark County, Kentucky, in a joint protest along with the Berea-based Kentucky Environmental Foundation (KEF) and several other non-profit organizations.
In February, 2011, he insisted Kentucky government to put an end to mountaintop removal coal mining along with the 14 other protestors as a part of the environmental group ‘Kentuckians for the Commonwealth’. He was locked up in the Kentucky governor’s office for this remonstration.
In 2011, he established ‘The Berry Center’ at New Castle, Kentucky to bring into light issues of land use, farm policy, local food infrastructure, urban education about farming, and farmer education that is lacking in Kentucky and the country as a whole.
Awards & Achievements
In 1967, he was awarded the ‘Bess Hokin Prize’ offered by the Poetry Magazine for his poem.
In 1969, he won a ‘Borestone Mountain Poetry Award’ and also received a ‘National Endowment of the Arts Grant’ that supported and funded his projects.
In 1971, he was named as ‘Distinguished Professor of the Year’ by University of Kentucky. In the same year, he received National Institute of Arts and Letters Award for excellence in writing.
In 1975, he received ‘Friends for American Writers Award’ for ‘The Memory of Old Jack’. The book conveyed the truth and integrity of the land and the people who lived in it through the eyes of a retired farmer in Kentucky.
Continue Reading Below
In 1989, he received the ‘Lannan Foundation Award’ for Non-fiction. In the same year, he delivered a commencement address to graduating students at ‘College of the Atlantic’, USA.
In 1992, he received ‘Victory Spirit Ethics Award’ from the Louisville Community Foundation, University of Louisville. In the following year, he received ‘Kentucky Libraries Award’ for Intellectual Excellence and ‘John Hay Award’, Orion Society.
In 1994, he received the ‘Aiken Taylor Award’ from the Sewanee Review for his poetry. He also received ‘T.S. Eliot Award’ from the Ingersoll Foundation in the same year.
He is the fellow of Temenos Academy, Britain where he frequently contributes to the annual college magazine ‘Temenos Academy Review’. The academy is under the patronage of the Prince of Wales.
In 2012, he received a membership of a literary organization, the ‘Fellowship of Southern Writers’. He also won the ‘National Humanities Medal’ for his contribution to the field of writing and humanities.
In 2013, he gained the fellowship of ‘The American Academy of Arts and Sciences’, one of the oldest and prestigious honorary societies. 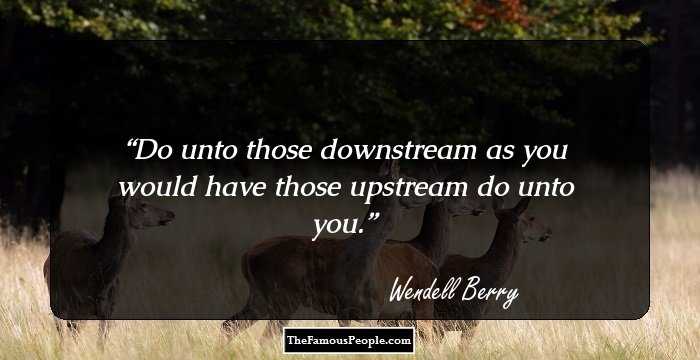 Quotes: You
Personal Life
In 1955, while doing graduation, he met Tanya Amyx, the daughter of a Art Professor at University of Kentucky. They finally married on May 29, 1957 and had two children: a daughter Mary Dee and a son Prior Clifford (Den).
Trivia
He is an outspoken believer and promoter of small town American life, ecological conservation and traditional farming techniques.
You May Like

Quotes By Wendell Berry | Quote Of The Day | Top 100 Quotes

See the events in life of Wendell Berry in Chronological Order