(One of The Highest-Grossing Actors in North America)

Harrison Ford is one of the most prolific actors in Hollywood who came to prominence for his role in ‘Star Wars’ trilogy and ‘Indiana Jones’. Such is his association with creating charismatic leading roles that the movie goer has to try very hard to distinguish him from Indiana Jones. He has received a number of awards and accolades for his performance, including the 'AFI Life Achievement Award,' 'the Cecil B. DeMille Award' and three 'Saturn Awards.' He also bagged in four 'Golden Globe Awards' nominations and has been nominated for the 'Academy Award.' Although he started very late, he fashioned a career by taking every chance and challenging every role that came his way. Popular stats show that he played four of the top six box-office hits of all time. From churning out monster hits after monster hits, his career witnessed a perplexing slump. But the grand old man of super hits has reinvented the smaller roles with his intense energy and reinvigorated his career playing a new set of characters and by carrying sequels on his shoulders. Harrison Ford was born on July 13, 1942, in Chicago, Illinois, to Dorothy (nee Dora Nidelman), a homemaker and former radio actress, and Christopher Ford, an advertising executive and a former actor. He is of Irish Catholic and Russian Jewish ancestry.

In 1960, Harrison Ford graduated from Maine East High School in Park Ridge, Illinois, and attended Ripon College in Wisconsin, where he was a member of the Sigma Nu fraternity. To overcome his shyness, he took a drama class in the final quarter of his senior year. 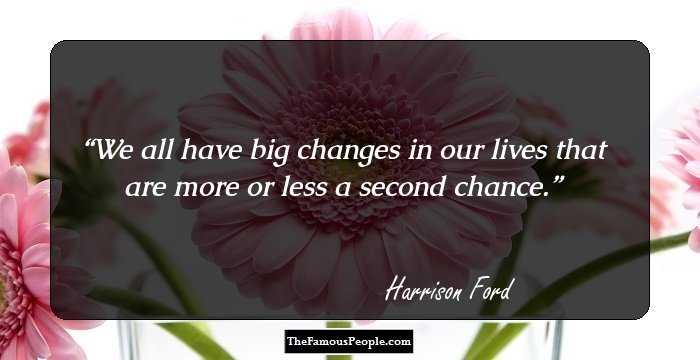 In 1964, Harrison Ford travelled to Los Angeles to find job opportunities in radio voice-overs. Two years later, he landed his first bit role as a bellboy in ‘Dead Heat on a Merry-Go-Round’. As a result of offending producer Jerry Tokovsky, he found little luck in minor roles as well.

Harrison Ford's first credited role was the 1967 Western film A Time for Killing.

He worked on several TV shows throughout the 60s and 70s: Gunsmoke, Ironside, The Virginian, The F.B.I., Love, American Style, and Kung Fu. Around this time, he supported his wife and two sons through his carpentry skills and by being a stagehand for The Doors.

The 80s saw the second wave of hits from collaborations with Ridley Scott, Peter Weir, Roman Polanski, etc. Some of the hits include Blade Runner, Witness, The Mosquito Coast, and Frantic.

The early 90s saw the actor cast in the works of Tom Clancy, Alan Pakula, Andrew Davis, and Sydney Pollack. Some of these films were Patriot Games, Clear and Present Danger, Presumed Innocent, The Devil’s Own, The Fugitive, Sabrina, Air Force One, What Lies Beneath and Regarding Henry, among others.

In addition to working in Crossing Over, and the documentary Dalai Lama Renaissance, Harrison Ford starred in 2008’s second-highest grossing film Indiana Jones and the Kingdom of the Crystal Skull.

In 2010, he released Extraordinary Measures, and worked on Morning Glory.
Continue Reading Below

In 2011, he starred alongside Daniel Craig and Olivia Wilde in the wildly successful science-fiction Western Cowboys & Aliens. To promote the film, the actor appeared hand-cuffed and led by security guards at the San Diego Comic-Con International, as though he was being dragged to the event against his will.

In 2013, he co-starred alongside Liam Hemsworth and Gary Oldman in the corporate espionage thriller Paranoia. 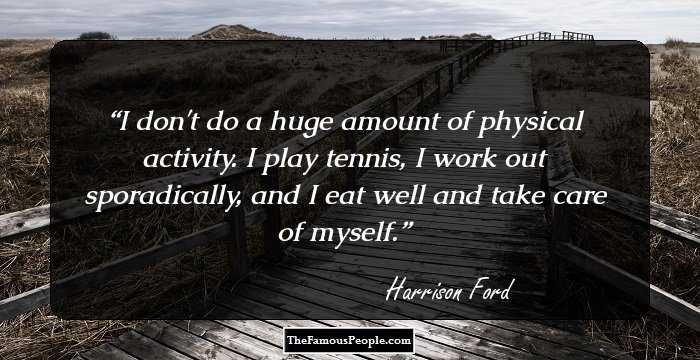 Quotes: I
Major Works
This remarkable actor played Hans Solo in Star Wars, The Empire Strikes Back, Return of the Jedi, and Star Wars Holiday Special. This widely successful original trilogy generated approximately $2.7 billion at worldwide.
The George Lucas/Steven Spielberg collaboration, starting with Raiders of the Lost Ark, Indiana Jones and the Temple of Doom, Indiana Jones and the Last Crusade, Indiana Jones and the Kingdom of the Crystal Skull grossed approximately $279 million worldwide.
Awards & Achievements
For his 1985 role in Witness, he was nominated for the Academy Award, the BAFTA, and the Golden Globe in the Best Actor category.
In 1997, Empire magazine ranked this actor No. 1 in its Top 100 Movie Stars of All Time list.
In 2000, he received the AFI Lifetime Achievement Award.
Continue Reading Below
In 2002, he received the Cecil B. DeMille Award at the Golden Globes.
In 2006, he received the Jules Verne Spirit of Nature Award for his efforts related to preservation of the planet. 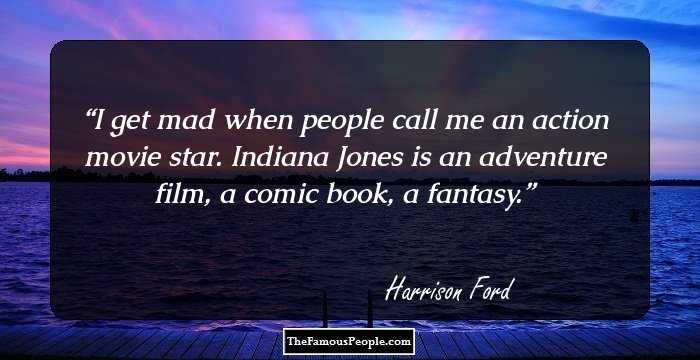 Ford has two sons through Mary Marquardt (Benjamin and Willard). Through his second wife, Melissa Mathison, he has two children—Malcolm, who is an actor and musician and Georgia, who is an actress. He is currently married to Calista Flockhart; the couple adopted a son, Liam. He also has three grandchildren.

An avid pilot and owner of both aircrafts and helicopters, he rescued a hiker overcome by dehydration. He was also involved in the crash of a Bell 206L4 LongRanger helicopter (N36R) but escaped unhurt.
He is the General Trustee on the Governing Board of the Archaeological Institute of America. In addition he serves the Young Eagles program, Wings of Hope, Conservation International, Restore HetchHetchy, and EarthShare in various capacities.
As a democrat, he publicly condemned the Iraq War, opposed the recall of California Governor Gray Davis, and testified before the U.S. Senate Foreign Relations Committee in support of the Dalai Lama.
A Life Scout, the second-highest rank in the Boy Scouts of America, he has volunteered and served in several community projects.
Trivia

Quotes By Harrison Ford | Quote Of The Day | Top 100 Quotes

See the events in life of Harrison Ford in Chronological Order 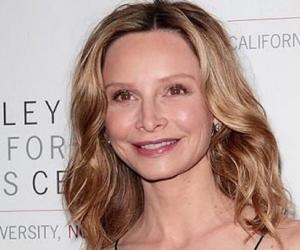 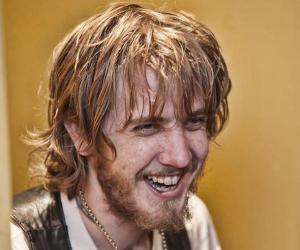 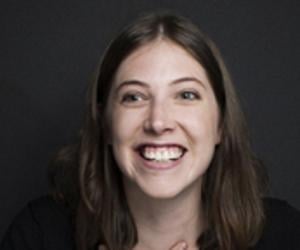