Daniel Craig is an English actor, best known for playing ‘James Bond’ in the eponymous movie series. Apart from his good looks, constituted by his blonde hair, blue eyes, and svelte hot body, Daniel Craig is also a skillful actor. Although he was once rebuffed as the next sex symbol, he worked hard to prove his critics wrong by revamping his image instead of banking on the newly found status and publicity. He switched to doing serious roles that gave him an opportunity to hone his skills. It was during these toiling hard days that Craig became a rising star. He delivered hit films, such as ‘Love is the Devil,’ ‘Elizabeth,’ ‘The Trench,’ ‘Road to Perdition,’ and so on. While these films got his career graph on the ascending track, it was his role as the greatest fictional spy ‘James Bond 007’ that changed his luck forever. He reached the zenith of success with ‘Bond’ films like ‘Casino Royale,’ ‘Quantum of Solace,’ ‘Skyfall,’ and ‘Spectre.’ British People
British Men
Pisces Actors
British Actors
Actors Who Are In Their 50s
Childhood & Early Life
Daniel Wroughton Craig was born on 2 March 1968, in Chester, Cheshire, England, to Carol Olivia and Timothy John Wroughton Craig. While his mother was an art teacher, his father owned the pubs, ‘Ring o’ Bells’ and ‘Boot Inn.’ Initially, he was employed as a midshipman with the ‘Merchant Navy.’
Academically a mediocre, Craig received his formal education from various schools, including ‘Holy Trinity Primary School,’ ‘Hilbre High School,’ and later ‘Calday Grange Grammar School’ where he studied briefly as a sixth form student.
Alongside completing his formal education, he trained himself in acting, attending classes at the ‘Everyman theatre.’ At the age of 16, he moved to London to train at the ‘National Youth Theatre.’
Later on, in 1991, he graduated from ‘Guildhall School of Music and Drama’ at Barbican. For three years, he received his training at the ‘Royal Shakespeare Company.’ 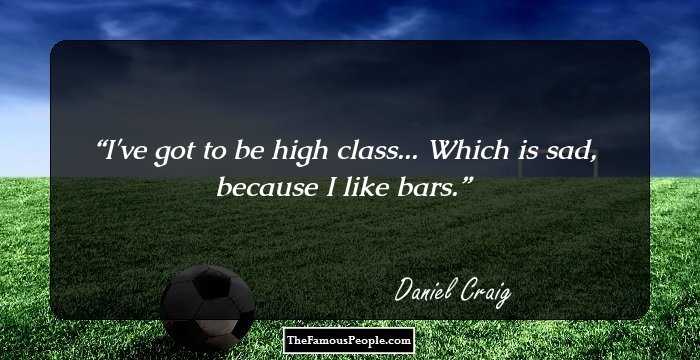 Quotes: Like
Continue Reading Below
Career
He started his career on a promising note, making his debut with the coming-of-age drama ‘The Power of One’ in 1992. The film had him playing the role of an Afrikaner soldier.
Subsequently, he starred in a number of films, including ‘Sharpe’s Eagle,’ ‘A Kid in King Arthur’s Court,’ ‘Kiss and Tell,’ and so on. He made his television debut in 1993 with the series ‘Zorro,’ in which he starred in two episodes.
Following this, he played guest roles in a number of television series, including ‘Drop the Dead Donkey,’ ‘The Young Indiana Jones Chronicles,’ ‘Between the Lines,’ ‘Heartbeat,’ and ‘Screen Two.’
His biggest breakthrough came in 1996 with the television series ‘Our Friends in the North.’ The hugely successful television series helped him gain a favorable image amongst the critics, who lauded his acting abilities.
Eventually, he became known as a sex symbol. People largely admired him for his looks and hot body rather than his acting skills. With a keenness to turn the tables, he ventured into films and television series of different genres.
The year 1998 became his most successful year career-wise as almost all of his films did well critically. The year began with the release of the biopic ‘Love is the Devil.’ Though the film opened to mixed reviews, it earned him much critical acclaim for his artistic skills.
After a successful outing in ‘Love is the Devil,’ he starred in a historical biopic titled ‘Elizabeth,’ which released in 1998. The movie was widely acclaimed for its excellent narration and perfect portrayal of the character of a Jesuit priest.
He continued appearing in successful films and went on to act in the World War I saga, ‘The Trench.’ The movie, which became a blockbuster hit, allowed him to showcase his skill as an actor. After his successful outing in ‘The Trench,’ he went on to appear in films like ‘Some Voices,’ ‘Hotel Splendide,’ and ‘I Dreamed of Africa.’
His ascending career graph met with a jolting blow when his next film, ‘Lara Croft: Tomb Raider,’ where he was paired opposite Angelina Jolie, received negative reviews from critics. However, the blow did not last long as he bounced back by playing an important role in the super hit film ‘Road to Perdition.’ The film was responsible in renewing his stardom.
Continue Reading Below
Riding on his renewed success, he came up with a powerful performance in ‘The Mother’ which was followed by another power-packed performance in the violent crime thriller, ‘Layer Cake.’ He then played the character of ‘Joe’ in the film ‘Enduring Love.’
His successful stint in films continued throughout 2005 as he starred in the blockbuster movie ‘The Jacket.’ He then appeared in Steven Spielberg’s ‘Munich.’ While his movies made him a regular news feature, it was the official announcement of his role as the next ‘007’ that created a stir.
His appointment as the next ‘James Bond’ created a controversy amongst people in the film fraternity and audience who criticized the choice. Despite the criticism, he accepted the responsibilities and chose to star as the next ‘James Bond,’ succeeding Pierce Brosnan.
On November 14, 2006, he proved his critics wrong by delivering a powerful performance in his first ‘Bond’ film. The movie ‘Casino Royale’ became a blockbuster hit, garnering $594 million at the box office, the highest ever by a ‘Bond’ film at the time. His performance was highly acclaimed and even earned him a couple of nominations in the ‘Best Actor’ category.
Following the ‘Bond’ film, he starred in a couple of other films, including ‘Infamous,’ ‘The Invasion,’ ‘The Golden Compass,’6 and ‘Flashbacks of a Fool.’ In ‘Renaissance,’ he voiced a character named Barthélémy Karas. However, none of these films worked in his favor.
His tough luck ended with the release of his second ‘Bond’ film, ‘Quantum of Solace.’ The movie was appreciated, but it could not replicate the success of ‘Casino Royale.’ However, it did earn him a couple of nominations.
Not letting the ‘Bond’ image dominate his acting career, he starred in other films, such as ‘Defiance,’ ‘Cowboys & Aliens,’ ‘Dream House,’ ‘The Adventures of Tintin,’ and ‘The Girl with the Dragon Tattoo.’
In 2012, he was seen reprising his role as ‘James Bond’ in his next outing titled ‘Skyfall.’ The movie surpassed all the 22 ‘Bond’ films released earlier in terms of positive reception and box office collection. The film crossed the $1 billion mark at the box office, eventually becoming seventh-highest-grossing film of all time and the highest-grossing film in the ‘Bond’ series.
Soon after, he appeared in his fourth ‘Bond’ film ‘Spectre’ which was directed by Sam Mendes, who was the director of the previous ‘Bond’ movie ‘Skyfall.’ The director-actor duo tried to recreate the magic and was moderately successful. The movie opened to mixed reviews and was a commercial success.
Continue Reading Below
He then appeared in an uncredited cameo as ‘Stormtrooper’ in the movie ‘Star Wars: The Force Awakens’ (2015). In 2017, he appeared in the critically acclaimed heist comedy ‘Logan Lucky.’ He also appeared in ‘Kings,’ which failed at the box-office and garnered poor reviews from critics.
He was signed to reprise his role as ‘James Bond’ in the 25th installment of the ‘Bond’ series ‘No Time to Die.’ By signing the movie, he became the third-longest serving ‘Bond’ after Roger Moore (seven movies) and Sean Connery (six movies).
He has also voiced the character of ‘James Bond’ in several video games, such as ‘GoldenEye 007’ and ‘James Bond 007: Blood Stone,’ played on platforms, such as ‘Nintendo 64,’ ‘Xbox 360,’ ‘PlayStation 3,’ ‘Nintendo DS,’ and ‘Microsoft Windows.’
He made his Broadway debut alongside Hugh Jackman in the drama ‘A Steady Rain’ at the ‘Gerald Schoenfeld Theatre.’ He again appeared in a Broadway play alongside his wife Rachel Weisz in ‘Betrayal’ at the ‘Ethel Barrymore Theatre.’ 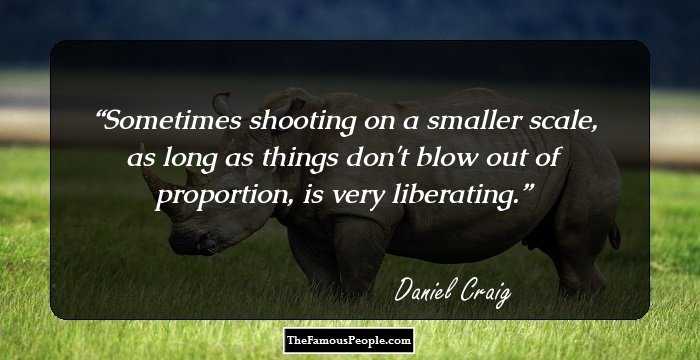 Awards & Achievements
Over the years, he has been nominated several times for prestigious awards. He received the ‘Best Actor’ award at several events, including ‘Edinburgh International Film Festival Award,’ ‘British Independent Film Awards,’ ‘London Film Critics Circle Awards,’ ‘Empire Awards,’ ‘Evening Standard British Film Awards,’ ‘Sant Jordi Awards,’ and ‘Critics' Choice Awards.’
Personal Life & Legacy
He tied the knot with Fiona Loudon in 1992. The couple was blessed with a daughter whom they named Ella. However, the marriage did not last long as it ended in divorce in 1994.
After divorcing Fiona Loudon, he dated German actress Heike Makatsch for seven years until 2004. Following this, he dated Satsuki Mitchell and Sienna Miller.
In December 2010, he began dating actress Rachel Weisz and eventually married her in June 2011. The couple is blessed with a daughter, born on August 2018. 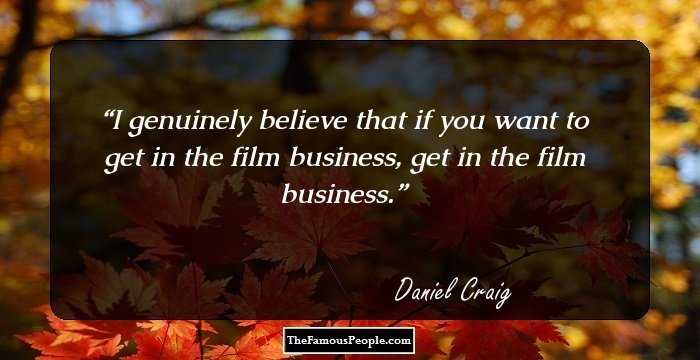 Quotes: Business
Trivia
Standing at 5 feet and 10 inches tall, this blonde-haired actor is the shortest to play the role of ‘James Bond.’
In October 2008, he bought an apartment in Primrose Hill, London for £4 million. He also owns homes in places like New York and Berkshire.

Quotes By Daniel Craig | Quote Of The Day | Top 100 Quotes

See the events in life of Daniel Craig in Chronological Order