Olivia Wilde is a popular American actress, producer, and director. She has appeared in a number of television and film productions, including ‘The O.C.,’ ‘The Black Donnellys,’ and ‘Tron: Legacy.’ She lived in Washington D.C. during her formative years and then shifted to Massachusetts where she completed the rest of her education. This popular actress is best-known for her feline-like eyebrows, lean figure, and deep voice. She received international stardom after she appeared in television productions like ‘The O.C.’ and has since received a number of film and television roles. Some of her films include ‘Cowboys & Aliens,’ ‘In Time,’ ‘People Like Us,’ and ‘The Words.’ Despite making great progress on the big screen, she continues to hold more influence and power on television. She is actively involved in a number of humanitarian efforts and is a political activist as she is a contributing board member of ‘Artists for Peace and Justice.’ She was also a supporter of a youth voter organization called ‘18 in ’08.’ With her ravishing good looks and talent, Wilde has set the benchmark for a number of upcoming television and film artists. American People
American Women
New Yorkers Actresses
Pisces Actresses
Female Film Directors
Childhood & Early Life
Olivia Jane Cockburn was born on March 10, 1984, in New York City, to Leslie and Andrew Cockburn. Her father was a journalist and her mother was a producer and journalist. She has an elder sister named Chloe Frances Cockburn and a younger brother named Charlie Philip Cockburn.
She wanted to become an actress right from the age of two. The family lived in Vermont for a brief period of time and a young Wilde attended ‘Georgetown Day School’ in Washington D.C.
In 1995, she played Magdalene in her debut short film ‘Meeting Magdalene.’
She later attended ‘Phillips Academy’ in Massachusetts, from where she graduated in 2002.
She also studied at the ‘Gaiety School of Acting’ in Dublin, Ireland for a brief period of time. 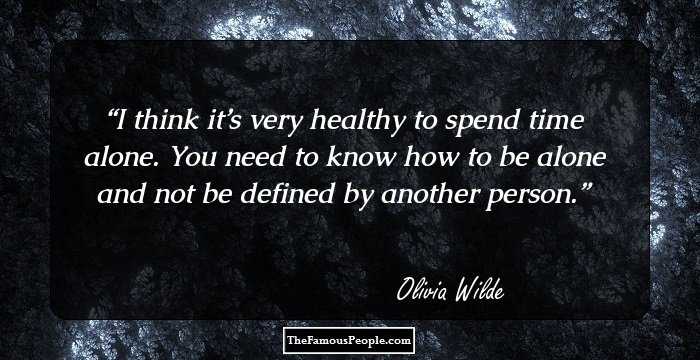 Quotes: You, Think, Time, Alone, Need, I
Continue Reading Below
Career
Her acting career took off when she played Jewel Goldman in the American television series ‘Skin’ where she appeared in six episodes. Her acting skills got her noticed and she was cast as Alex Kelly in ‘The O.C.,’ which was a hit American drama series.
She made her motion picture debut as Kellie in the American hit film ‘The Girl Next Door’ in 2004. The next year, she appeared in ‘Conversations with Other Women,’ playing the role of a bridesmaid.
In 2006, she appeared in three films, namely ‘Alpha Dog,’ ‘Bickford Shmeckler’s Cool Ideas,’ and ‘Turistas.’ The next year, she was seen in ‘The Death and Life of Bobby Z.’
In 2007, she returned to television with a role in ‘The Black Donnellys.’ She then played Dr. Remy ‘Thirteen’ Hadley in the television series ‘House.’ She played Remy Hadley from 2007 to 2012, appearing in 81 episodes.
From 2008 to 2012, she was cast in films, such as ‘Fix,’ ‘Year One,’ ‘The Ballad of G.I. Joe,’ ‘The Next Three Days,’ ‘Tron: Legacy,’ ‘Cowboys & Aliens,’ ‘The Change-Up,’ ‘In Time,’ and ‘Butter.’ In 2012, she was seen in a documentary titled ‘Half the Sky’ and lent her voice for TV series, such as ‘Robot Chicken’ and ‘Tron: Uprising.’
In 2012, she also starred in a number of other films, including ‘Deadfall,’ ‘People Like Us,’ and ‘The Words,’ which made the year an extremely busy one for the actress.
In 2013, she was seen in an episode of the comedy series, ‘The High Fructose Adventures of Annoying Orange.’
Juggling between her television assignments and her film projects, she starred in ‘The Incredible Burt Wonderstone,’ ‘Drinking Buddies,’ ‘Rush,’ and ‘Third Person’ in 2013.
In 2014, she appeared as the lead in the movie ‘The Longest Week’ opposite Jason Bateman. In 2014, she was also cast in an episode of ‘American Dad!’ The following year, she had a series of movie releases like ‘The Lazarus Effect,’ ‘Unity,’ ‘Meadowland,’ and ‘Love the Coopers.’
Continue Reading Below
She voiced the role of Charlotte in the adult animated comedy ‘BoJack Horseman.’ She also played the role of Olivia in five episodes of British TV series ‘Doll & Em.’
In 2016, she appeared in the movie ‘Black Dog, Red Dog’ and then played Devon Finestra in eight episodes of the TV series ‘Vinyl.’ The following year, she made her Broadway debut, portraying the role of Julia in ‘1984’ which opened at the ‘Hudson Theatre’ at New York City.
In 2018, she appeared in the critically acclaimed movie ‘A Vigilante’ and then played a prominent role in ‘Life Itself.’ The latter was rated poorly and performed badly at the box-office. The following year, she made her directorial debut in the movie ‘Booksmart’ which was well-appreciated by the critics and did considerably well at the box-office.
She has been featured in several music videos by various artists and has lent her voice for video games as well. In 2019, she was cast to play Kathy Scruggs in a drama film titled ‘Richard Jewell.’ 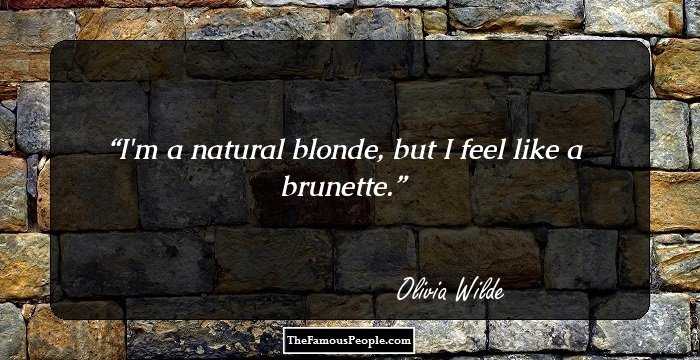 Quotes: Like, I
Major Works
One of her major works till date is her portrayal of Sarah Witt in ‘Bickford Shmeckler’s Cool Ideas,’ which released in 2006. Directed by Scott Lew, Wilde’s performance in the movie was appreciated by the critics and she even won two prestigious awards for her acting.
Her directorial debut movie ‘Booksmart’ was critically acclaimed and won her two prestigious awards for ‘Best Movie’ at the ‘Palm Springs International Film Festival’ and ‘San Francisco International Film Festival.’
Awards & Achievements
She won the ‘Best Actress’ award at ‘The Comedy Festival’ for ‘Bickford Shmeckler’s Cool Ideas’ in 2006.
In 2006, she won the ‘Rising Star Award’ at the ‘Vail Film Festival’ for ‘Bickford Shmeckler’s Cool Ideas.’
Continue Reading Below
In 2010, she was voted as PETA’s ‘Sexiest Vegetarian Celebrity.’ 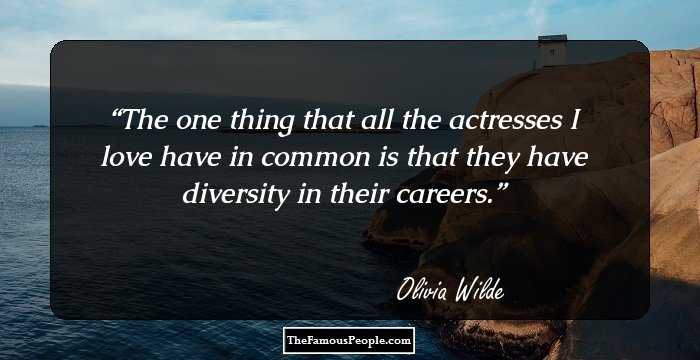 Quotes: Love, I
Personal Life & Legacy
Olivia Wilde has dual citizenship – United States and Ireland.
She is a strict vegan and a ‘PETA’ activist.
She married a filmmaker named Tao Ruspoli on June 7, 2003, in a private ceremony in an abandoned school bus. She was only 19-years-old at the time of her marriage.
She divorced Ruspoli citing ‘irreconcilable differences’ on September 29, 2011. The same year, she began dating actor Jason Sudeikis. They got engaged in January 2013 and have two children; a son named Otis Alexander and a daughter named Daisy Josephine.
Apart from being an actress, she is also a board member of ‘Artists for Peace and Justice’ and ‘ACLU of Southern California.’ She also actively supports organizations, such as ‘18 in ’08,’ ‘Global Poverty Project,’ and the ‘Fair Foods Campaign.’
She appeared in a video for Gucci’s ‘Chime for Change’ which raised awareness about women’s issues in the field of justice, health, and education.
A staunch feminist, she participated in the ‘Women’s March’ in 2017 and 2018. She also participated in a PSA, creating awareness about Down syndrome on ‘World Down Syndrome Day’ in 2016.
Trivia
When this American actress was young, Christopher Hitchens, the famous writer, was her babysitter.
Her mother Leslie participated as a Democratic nominee in the 2018 mid-term Virginia election but lost to Republican Denver Rigglemen.

See the events in life of Olivia Wilde in Chronological Order