Henry Tayali
DID WE MISS SOMEONE?
CLICK HERE AND TELL US
WE'LL MAKE SURE
THEY'RE HERE A.S.A.P
Quick Facts

Cause of Death: Spanish Flu

Austrian Celebrities
Austrian Men
Austrian Artists
Austrian Artists & Painters
Male Artists & Painters
Childhood & Early Life
Gustav Klimt was born in Baumgarten, Austrian Empire, to Ernst Klimt the Elder, a gold engraver and Anna Klimt, a music aficionado. He was second of the seven children of the couple.
Until 1833, he studied architectural painting at the Vienna School of Arts and Crafts. During this time, he lived in poverty. He initially began his career painting interior murals and ceilings on large public buildings in Vienna, Austria. 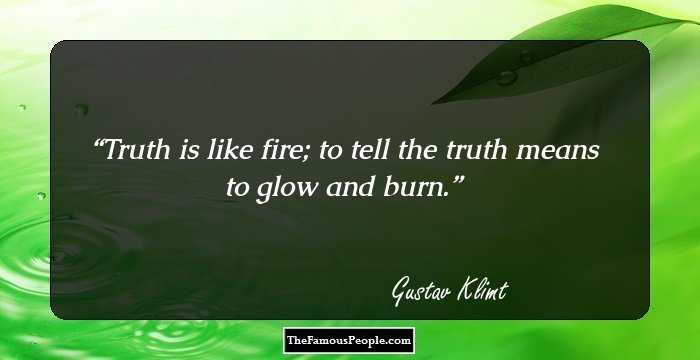 Quotes: Like
Continue Reading Below
Career
In 1888, he painted ‘Old Burgtheater in Vienna’, which was a painting of the old theatre that would soon be demolished. The painting was well appreciated for its photographic realism.
In 1897, he founded an association for artists called, ‘The Vienna Secession’. He served as its first President. The association also had its own magazine, ‘Ver Sacrum’. His liaison with the association lasted until 1908.
From 1888 until 1890, he worked on his painting, ‘Sappho’, which represented the Greek lyric poet named Sappho, who was born in Lesbos, an island.
In 1890, he painted, ‘Portrait of pianist Joseph Pembauer’, which, as the title describes, was a portrait of the piano teacher Joseph Pembauer. The painting was appreciated for its vivid and detailed pragmatism.
In 1894, he was commissioned to adorn the ceiling of the Great Hall of the University of Vienna - a project that he could complete only by 1900. However, the three paintings that he had produced, Philosophy, Medicine and Jurisprudence were sharply criticized for their radical themes and eventually destroyed.
In 1895, he painted, ‘Love’, which was a part of the collection titled, ‘Allegories and Emblems’. The painting was known for its elements of metaphorical intensity and psychological nuances.
In 1899, he painted, ‘NudaVeritas’, which was a symbolic painting of a nude woman holding a mirror.
In 1901, he completed the painting, ‘Judith and the Head of Holofernes’, also known as ‘Judith’. The work was inspired from the biblical character with the name, Judith.
Completed between 1901 and 1902, his painting ‘Goldfish’, was one of his most controversial paintings. The painting had images of women who were baring their back.
Continue Reading Below
In 1906, he painted ‘Portrait of FritzaRiedler’, which was one of his most showcased works. The painting was a good example of the use of geometric elements.
Between 1907 and 1908, he worked on his painting, ‘The Kiss’, which is one of the many paintings that he released during his ‘Golden Phase’. A squared canvas with images of two lovers embracing each other, the painting became one of his most acclaimed works.
Painted in 1907, his painting, ‘Portrait of Adele Bloch-Bauer I’, is one of his most revered paintings. It was sold for $135 million to businessman Ronald Steven Laude in 2006.
Painted between 1908 and 1911, his painting, ‘Death and Life’, is one of his most exhibited paintings that received many anecdotes and awards including the first prize in the World Exhibition in Rome.
In 1910, he painted, ‘Lady with Feather’ which is also known by the name, ‘Black Feather Hat’. The painting depicts a woman with red hair wearing a disproportionate hat.
Completed between 1914 and 1916, his painting, ‘Portrait of Baroness Elisabeth Bachofen-Echt’, which had elements of abstract and serrated syntax.
Painted in 1918, ‘Adam and Eve’ is inspired from the biblical account of Adam and Eve. The painting has many symbolic elements and decorative elements. 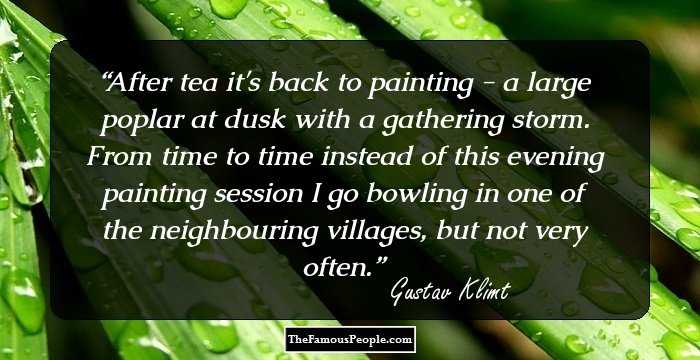 Quotes: Time
Major Works
His painting ‘Old Burgtheater in Vienna’ is one his most critically acclaimed paintings known for its photographic realism. It was awarded a prize by The Emperor of Austria.
‘The Kiss’ is one of his most popular paintings and is widely regarded as a masterpiece belonging to the early modern period of art. The painting is preserved at the �sterreichische Galerie Belvedere Museum in the Belvedere Palace, Vienna.
Awards & Achievements
In 1888, he received the ‘Golden Order of Merit’, which was conferred upon him by Franz Josef I of Austria, for his contribution of painting murals in the Burgtheater in Vienna.
He was made honorary member of the University of Munich and University of Vienna. 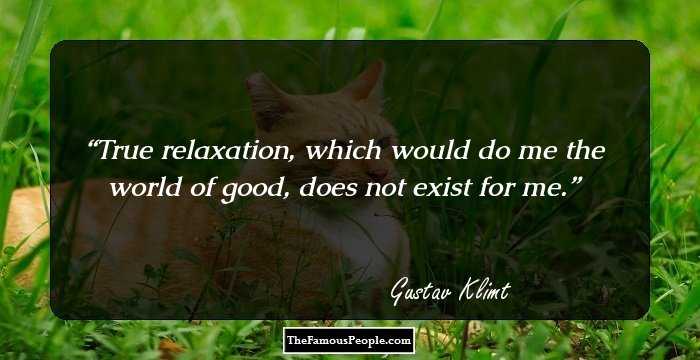 Quotes: Me
Personal Life & Legacy
He was in a life-long relationship with Emilie Louise Floge, with whom he had fourteen children.
He died at the age of 53 in Vienna, Austria-Hungary, after suffering from stroke and pneumonia, due to influenza epidemic of the year. He was buried at the Hietzinger Cemetery in Hietzing, Vienna.
Trivia
This Austrian symbolic painter never painted a self-portrait as he claimed that he is more interested in other people than in himself.

Quotes By Gustav Klimt | Quote Of The Day | Top 100 Quotes

See the events in life of Gustav Klimt in Chronological Order