Egon Schiele was a famous Austrian painter, famous for being influenced by the works of Gustav Klimt and pioneering into the art of expressionism. He is still remembered for his outrageously bold and sexual drawings, the portraits of nude models and himself. The sexual undertone in his work was highly criticized during his time, was called vulgar and grotesque but today they are considered as masterpieces. He was born and brought up in Austria and lived all of his life there. His family did not approve of his painting endeavors and talent. But after the death of his father, his maternal uncle did him a favor by letting him pursue his passion and soon he came in contact with the famous artist Gustav Klimt who influenced him and facilitated his growth in the realm of art and expression. Schiele started with condemning the conventional structure of painting, got influenced by Klimt for a good part of his career and then moved towards expressing what defined him ––freedom of human sexuality and its bold portrayal. He had quite an exciting and adventurous life before he succumbed to his untimely death––he practiced extreme lifestyle with his mistresses, got imprisoned for seducing young girls, had to join the army during the World War I to become a guard of Russian POW, married a socially acceptable woman––all of these incidents influenced his paintings a great deal and helped in his evolution as an artist. He has been described as an artist who was stricken with the tragedy of his father’s death and his sole solace was to express himself in the dark side of sexuality, death and decay. L. S. Lowry
Artists #42
Artists & Painters #43
DID WE MISS SOMEONE?
CLICK HERE AND TELL US
WE'LL MAKE SURE
THEY'RE HERE A.S.A.P
Quick Facts

Cause of Death: Spanish Flu

Austrian Celebrities
Austrian Artists
Austrian Artists & Painters
Male Artists & Painters
Gemini Artists & Painters
Childhood & Early Life
Egon Schiele was born in Tulln, Austria to Adolf and Marie Schiele. His father worked as a station master of the Tulln station in the Austrian State Railways and died of syphilis when Egon was only 15 years old.
Until 11, Schiele was fascinated by trains and used to sketch them. It infuriated his father and he burnt those sketches. He was not a very studious student and was only interested in athletics and drawing.
When his father died, his maternal uncle, Leopold Czihaczec, became his official guardian. Schiele troubled him by not taking interest in academics but his uncle recognized his aptitude for drawing. After much resistance, he allowed him a tutor.
In 1906, Schiele started studying at the Kunstgewerbeschule, Vienna, but within one year he was sent to Akademie der Bildenden K�nste for a more traditional learning. He got tired of the conservative style there and left within 3 years. 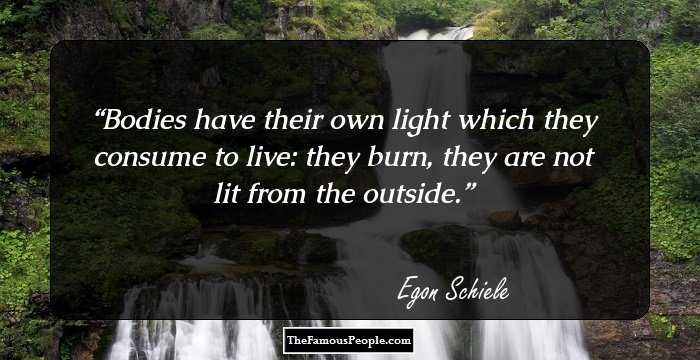 The Sexiest Men Of 2020, Ranked
Career
In 1907, Schiele met Gustav Klimt who took him under his wings, as he was famous for mentoring young artists. He was peculiarly interested in Schiele and bought his drawings, arranged models for him, etc.
The following year, Schiele managed to put up his first art exhibition in Klosterneuburg. He left his academy in Vienna in 1909 and started his own group the ‘Neukunstgruppe ("New Art Group")’ with the other discontented students.
In 1909, he got an invite from Klimt to exhibit some of his paintings at the Vienna Kunstschau. As he was no more obliged towards his academy, he started exploring the human form and human sexuality.
From 1910-14, Schiele started taking part in various exhibitions, like, Neukunstgruppe in Prague (1910), Budapest (1912), Cologne (1912), Secessionist shows in Munich and solo shows in the Galerie Hans Goltz (1913) and Paris (1914).
In 1912, Schiele was arrested for seducing a girl below the age of consent. He spent 24 days in prison and there he painted a series of 12 paintings portraying the distress of the prison life.
After getting married in 1915, he was ordered to take active role in the army. He was responsible for guarding and escorting Russian Prisoners at Prague. He was eventually made a clerk in POW camp.
While working in the army, he continued to exhibit in Berlin, Munich and Dresden. He also painted Russian POW and used an abandoned store room as his studio. In 1917, he came back to Vienna and started painting full-time again.
In 1918, Schiele participated in the Secession’s 49th exhibition in Vienna. He displayed in total 50 works and drew a poster for the exhibition–– evocation of the ‘Last Supper’, with a picture of himself in the place of Christ. 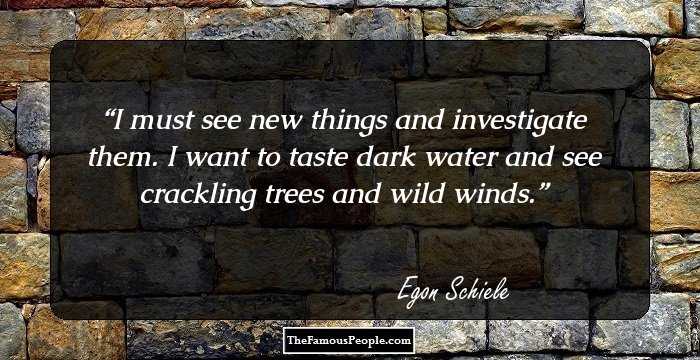 Quotes: I
Continue Reading Below
Major Works
Schiele’s drawings and their scope grew with the experiences of his life. He started out with strong impressions of Klimt’s work, experimented with human sexuality by drawing nudes and then he moved to themes like death and rebirth after his imprisonment.
It was during the war and his involvement in it that highly influenced his work and gave his paintings the detailing it lacked before. Although, most of his models were military officers, Painting nude females still remained his personal favorites.
Personal Life & Legacy
In 1911, Schiele came in contact with Walburga (Wally) Neuzil, a 17 year old model, for some of his paintings. He was introduced to him by Gustav Klimt. She is considered as Klimt’s mistress by many.
Both of them ran away from Vienna to the small town of Cesk� Krumlov in southern Bohemia but their outrageous lifestyle was vehemently disapproved by the people of the town - especially his employing of teenage girls as his models.
Facing resistance from people, the couple moved to Neulangbach and continued with their lifestyle. Schiele’s studio became famous for being a hangout point for the delinquent children of the town.
In 1912, he was arrested for seducing a girl who was below the age of consent to form sexual relationship with him. He was imprisoned and his paintings were declared as pornographic and erotic.
He got married to Edith Harms in 1915 and wanted to continue his affair with Wally. She left him and never saw him again. This is time when he made his famous painting ‘Death and the Maiden’.
In 1918, Schiele’s wife, Edith, died of the Spanish flu, which had already killed 20,000,000 people in Europe. When she died she was 6 months pregnant and within three days of her death, Schiele also succumbed to it and died. 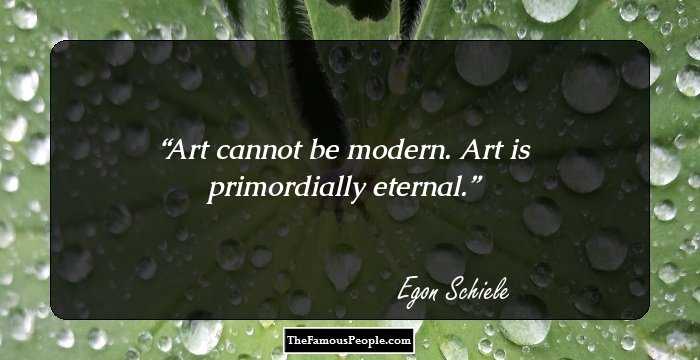 Quotes: Art
Trivia
A biographical German movie, ‘Excess & Punishment’ in 1980 was based on this genius painter's life.
Joanna Scott’s ‘Arrogance’ is a novel based on his life and has him as the main protagonist.
‘Portrait of Wally’ (1912) was purchased by Rudolf Leopold in 1954. He made it a part of the collection of the Leopold Museum when it was established by the Austrian government, purchasing more than 5,000 pieces that Leopold had owned.
He showed sexual tendencies towards his sister, Gerti, from a very young age but his father was quite aware of it and once when both of them had locked themselves inside a room, he had to break it down to see what they were doing.
When he was sixteen he took his twelve-year-old, sister, Gerti by train to Trieste without the consent of his parents and spent a night in a hotel room with her.
Death of his father had a major influence on his life; he never got over it and incorporated the feeling of loneliness and abandonment that he felt with his death, into his paintings. He often visited the places that his father used to frequent when he was alive.
You May Like

See the events in life of Egon Schiele in Chronological Order