Yoko Ono is a renowned Japanese singer, contemporary artist, and filmmaker. Coming from a wealthy and educated background, she chose to make a career in singing and performance art, which brought her both positive and negative publicity. This was mainly due to her link-up with The Beatles member, John Lennon, which was assumed to be the reason behind the group’s break-up. Nevertheless, she fought and rose to create a name for herself in the world of music and performance art. By delivering unusual acts, she moved beyond the boundaries of music, art and theatre, thereby being highly influential in motivating the punk and new generation. But, it was after her husband’s assassination that she emerged as a strong individual, and gave some of her best solo hits and best-seller albums to the music industry. Among her numerous solos, ‘Season of Glass’ is considered to be her best album, which received immense appreciation outside the standard critical and avant-garde community. During her over half-decade career, she gave some hit music albums, which include ‘Yoko Ono/Plastic Ono Band’, ‘Rising’, ‘Wedding Album’, ‘Live Peace in Toronto 1969’, and ‘Double Fantasy’, apart from over 16 films, such as ‘Bottoms’, ‘Cut Piece’, ‘Two Virgins’, ‘Rape’, Freedom’, and ‘Making of Fly’. Shigeru Miyamoto
DID WE MISS SOMEONE?
CLICK HERE AND TELL US
WE'LL MAKE SURE
THEY'RE HERE A.S.A.P
Quick Facts

Japanese People
Peace Activists
Japanese Women
Sarah Lawrence College
Women Artists
Childhood & Early Life
Yoko Ono was born on February 18, 1933, in Tokyo, as the eldest of three children, in a wealthy banking family to Eisuke Ono and Isoko Yasuda Ono.
Her father was transferred to San Francisco two weeks before her birth and hence, was able to meet her only when the family shifted to the US in 1935.
The family returned back to Japan in 1937, where she secured admission in the Gakushuin School. In 1940, the family relocated to New York City and back to Hanoi next year, where she attended Keimei Gakuen primary school.
She went to Scarsdale, New York, in 1951 with her family and enrolled in Sarah Lawrence College, but left midway in 1956. 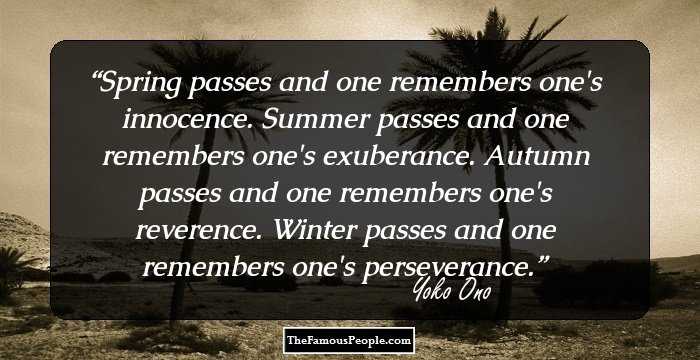 Continue Reading Below
Career
Her loft events held on Chamber Streets caught the attention of leading New York’s avant-garde artists, which won her an opportunity to work with leading musicians, like Karl-Heinz Stockhausen, George Maciunas and Nam June Paik.
She went to Tokyo to live with her parents after her first marriage failed, where she met American jazz musician and filmmaker Anthony Cox and returned to New York with her new family, to take up performance art.
She performed her first seminal act, ‘Cut Piece’ in Tokyo, which was well-received. She repeated her acts in Manhattan and London, in 1965 and 1966 respectively, which made her a sensation in the art world.
In 1966, she made an artistic ad film ‘Bottoms’ after 365 friends and volunteers agreed to get their naked buttocks photographed, as part of an experiment with performance art.
She met John Lennon at the preview of her art exhibition in London in 1966, with whom she collaborated on several musical and artistic projects.
The duo released their first album ‘Unfinished Music No. 1: Two Virgins’ and an experimental piece ‘Revolution 9’ in ‘The White Album’. ‘Unfinished Music No. 2: Life with the Lions’ and ‘The Wedding Album’ followed soon after.
They formed their own band, Plastic Ono Band, in 1969 and launched their first album ‘Live Peace in Toronto 1969’. A year later, Ono recorded her first solo album ‘Yoko Ono/Plastic Ono Band’ which was listed at #182 on the US charts.
She released a double album ‘Fly’ in 1971, followed by a protest-song album ‘Sometime in New York City’ in 1972. The following year, she came up with two solo albums, ‘Feeling the Space’ and ‘Approximately Infinite Universe’.
Following the death of her husband Lennon, she released a soulful and grieving solo album ‘Season of Glass’ in 1981 and an optimistic album ‘It’s Alright (I See Rainbows)’ in 1982.
Continue Reading Below
She released a series of albums in the following years, such as ‘Every Man has a Woman’, ‘Milk and Honey’, and ‘Starpeace’, before switching back to visual and performance art.
She debuted at Off-Broadway with her musical ‘New York Rock’ in 1994. This was followed by the re-issue of her solo albums on CD by Rykodisc Records in 1997.
During the 2000s, she returned to music, recording various albums, like ‘Blueprint for a Sunrise’, ‘Walking on Thin Ice (Remixes)’, ‘Yes, I’m a Witch’, ‘Between My Head and the Sky’ and ‘Yokokimthurston’, which became top hits.
Her autobiography ‘Memories of John Lennon’ was released in 2005. 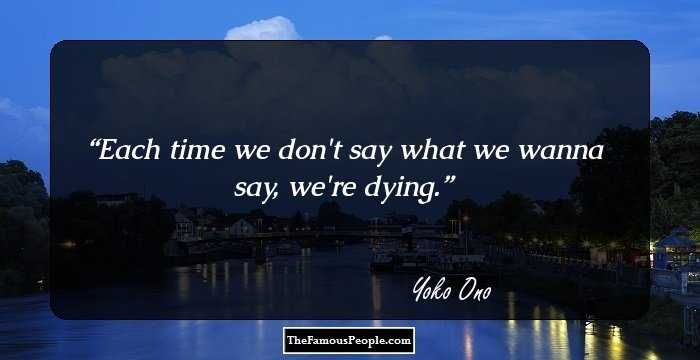 Quotes: Time
Major Works
Her ‘Cut Piece’ act at the Sogetsu Art Center, Tokyo, in 1964, where she invited the viewers to cut off pieces from her clothing using scissors, became a cult piece of conceptual and performance art.
A paradigm of her abstract art, the ‘Grapefruit’ book, released in 1964, illustrated numerous weird situations to be completed by the reader. Its sequel ‘Acorn’ was released in 2013.
While honeymooning in Amsterdam in 1969, she used her publicity for holding ‘Bed-Ins for Peace’ campaign as a public protest against the Vietnam War. Her extended campaign in Montreal resulted in the single ‘Give Peace a Chance’.
Awards & Achievements
In 1982, she received the Grammy Award for ‘Double Fantasy’ under the Album of the Year category, along with John Lennon and Jack Douglas.
Continue Reading Below
She was awarded an honorary Doctorate of Laws by Liverpool University in 2001 and an honorary Doctor of Fine Arts from Bard College in 2002.
In 2003, the Museum of Contemporary Art Los Angeles presented her with the 5th MOCA Award to Distinguished Women in the Arts.
She received the lifetime achievement from the Japan Society of New York in 2005 and the Golden Lion Award from the Venice Biennale in 2009.
She released a remixed version of her song ‘Move on Fast’ in March 2011 which topped the US Billboard Dance Chart, making it her 8th number one single in the dance charts since 2000.
She received Austria’s highest award for applied art, Oskar Kokoschka Prize, in 2012.
In 2013, she became an honorary citizen of Reykjavik, Iceland, and was declared an honorary patron to Alder Hey Charity, London. 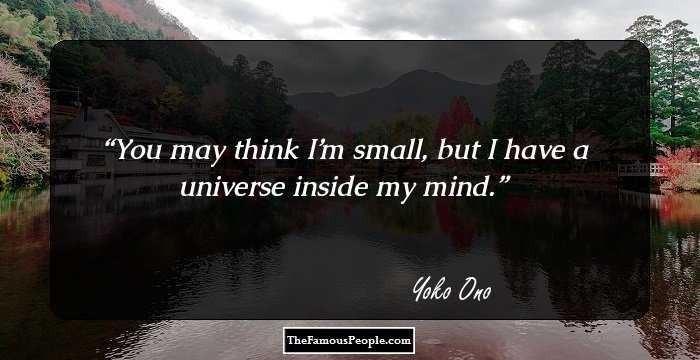 Quotes: You, Think, I
Personal Life & Legacy
She married Toshi Ichiyanagi in 1956. Sadly, the marriage was short-lived and the two separated in 1962, after which she was admitted in a mental hospital briefly for clinical depression.
She was released from the mental hospital by Anthony Cox, whom she married in June 1963. The couple had a daughter, Kyoko Chan Cox, in August 1963. This marriage too did not work and they divorced in 1969.
Her third marriage to founder member of Beatles rock band, John Lennon, (in March 1969), saw a series of break-ups and patch-ups after he got involved with his personal assistant, May Pang.
The couple had a son, Sean Taro Ono Lennon, in October 1975. The relationship ended with Lennon’s murder in December 1980.
She was reported to having a romantic affair with Sam Havadtoy, a Hungarian dealer of antiques, which ended in 2001.
Her son, Sean, is a popular musician and composer, who recorded the album ‘Rising’ with her under his band Ima Rising, in 1995. In 2008, he formed another group ‘The Ghost of a Saber Tooth Tiger’.

See the events in life of Yoko Ono in Chronological Order