Gunnar Myrdal was a Swedish economist and sociologist, who was awarded the Nobel Memorial Prize in Economic Sciences along with Friedrich Hayek in 1974. He is best known for his study of race relations and his work in the theory of money and economic fluctuations. He and his wife, Alva Myrdal, were staunch believers in social engineering and played an important role in the establishment of the Folkhemmet and the welfare state in Sweden. His wife became the recipient of the Nobel Peace Prize in 1982. Born into a family of comfortable means in Sweden, Gunnar Myrdal grew up to be an ambitious young man. He earned a law degree from Stockholm University and began practicing law while also continuing his studies. He eventually completed his doctorate in economics with a thesis on the role of expectations in price formation. He went on to have a successful academic career and founded the Institute for International Economic Studies at Stockholm. He travelled widely across Europe and the United States. He connected political science, social science, and economics and made major contributions to the philosophy of knowledge. He is the grandfather of economist Stefan Fölster. Paul Samuelson
Economists #142
Sociologists #48
Intellectuals & Academics #909
Continue Reading Below
DID WE MISS SOMEONE?
CLICK HERE AND TELL US
WE'LL MAKE SURE
THEY'RE HERE A.S.A.P
Quick Facts

Gunnar Myrdal was born on 6 December 1898, in Skattungbyn, Sweden. His father, Karl Adolf Pettersson, was a building contractor. His mother’s name was Anna Sofia Karlsson. Not much is known about his childhood.

He joined the Law School of Stockholm University to study law and graduated in 1923. He continued his studies at the university while simultaneously practicing law and received his juris doctor degree in economics in 1927.

He studied in Germany and Britain for short periods between 1925 and 1929. He travelled to the United States for the first time in 1929-30 as a Rockefeller Fellow. He also began publishing his books during this time, releasing The Political Element in the Development of Economic Theory in 1930. 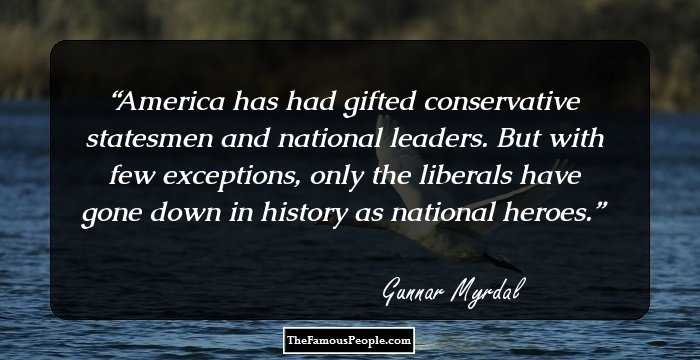 Gunnar Myrdal returned to Europe in 1930 and was appointed as an associate professor at the Institute of International Studies in Geneva, Switzerland.

He was appointed to the Lars Hierta Chair of Political Economy and Public Finance at the University of Stockholm in 1933. In this role, he succeeded Gustav Cassel.

Besides academics, he also had a keen interest in politics and was active in the Swedish political scene. He was elected to the Senate as a member of the Social Democratic Party in 1934.

The Carnegie Corporation of New York commissioned him to direct a study of what was called “the American Negro problem” in 1938. He conducted a comprehensive sociological, economic, and anthropological study, the result of which was published as An American Dilemma: The Negro Problem and Modern Democracy in 1944.

He returned to Sweden and was made a member of the Board of the Bank of Sweden. He also served as chairman of the Post-War Planning Commission.

From 1945 to 1947, Gunnar Myrdal served as Sweden’s Minister of Commerce. He quit this position to become the executive secretary of the United Nations Economic Commission for Europe.

In 1957, he began to oversee a comprehensive study of economic trends and policies in South Asian countries. This research was funded by the progressive think tank the Twentieth Century Fund. The study led to the publication of his three-volume Asian Drama: An Inquiry into the Poverty of Nations in 1968.

In 1970, he published a book called The Challenge of World Poverty, meant to be a companion book to Asian Drama. In this book, he laid out a set of possible chief policy solutions to the problems he outlined in the previous one.

He served as chairman of the Board of the Stockholm International Peace Research Institute (SIPRI). He was also the co-chair of the International Commission of Inquiry into U.S. War Crimes in Indochina. He headed the Swedish Vietnam Committee as well and signed the Humanist Manifesto.

He was visiting Research Fellow at the Center for the Study of Democratic Institutions at Santa Barbara, California, in 1973-74 and Distinguished Visiting Professor at New York City University in 1974-75. 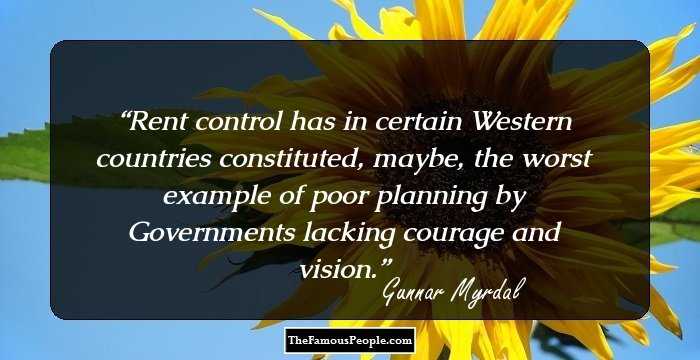 Gunnar Myrdal’s best-known work is An American Dilemma: The Negro Problem and Modern Democracy. It is a study of race relations that looked into the obstacles American black people faced in the 1940s. The book was highly influential and laid the groundwork for future racial integration and affirmative action.

Gunnar Myrdal married sociologist and diplomat Alva Reimer in 1924. The couple had three children: two daughters, Sissela and Kaj, and one son, Jan. Alva held high-profile posts in the United Nations and UNESCO. She also served as the Swedish Ambassador to India.

Gunnar Myrdal was diagnosed with Parkinson's disease during his later years. He died on 17 May 1987, aged 88. 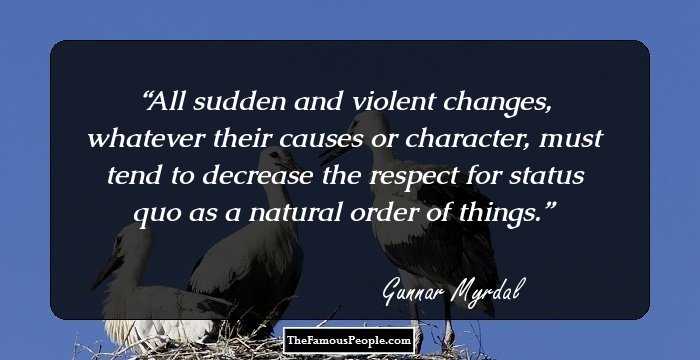 Quotes By Gunnar Myrdal | Quote Of The Day | Top 100 Quotes

See the events in life of Gunnar Myrdal in Chronological Order