(Inventor of 'Radio' and Winner of 1909 Nobel Prize in Physics)

Guglielmo Marconi was an Italian engineer and inventor who successfully demonstrated the working of long-distance wireless telegraph and radio signal. This Nobel-prize winner was born into a wealthy and educated family, and was first educated in Bologna and Florence, later moving to a technical school in Leghorn. As a boy he was impressed by the works of Hertz, Maxwell and Lodge. He began experimenting in his father’s estate and was successful in sending wireless signals over short distances, greater than a mile. He took his machine to England where his invention was received with enthusiasm. One of the interested parties was British Post Office. Within a year, his successful endeavour of broadcasting to 12 miles, Marconi applied for his first patent. Determined to establish that wireless waves were not influenced by the curves of Earth, he transmitted his historic wireless signals across the Atlantic. The claims of his transatlantic signal were however never quite verified. Marconi continuously explored the various possibilities of the usage of radio waves beyond the spectrum of telecommunications. His experimentation resulted in discovering the use of microwave in physical therapy. Guglielmo, as an entrepreneur was quite conservative when it came to patents, as he never disclosed the full design until the patent was given to him, allowing him to realize the full monetary benefit Amedeo Avogadro
DID WE MISS SOMEONE?
CLICK HERE AND TELL US
WE'LL MAKE SURE
THEY'RE HERE A.S.A.P
Quick Facts

Italian Celebrities
Italian Men
Male Scientists
Male Physicists
Taurus Scientists
Childhood & Early Life
On April 25th, 1874, Marconi the second son of Giuseppe Marconi and Anne Jameson was born. His father was a wealthy Italian country gentleman and his mother, an Irish was the daughter of Daphne Castle and Andrew Jameson, a family of distillers.
He was privately tutored in Bologna, Florence and Leghorn. As a boy, Marconi was interested in electrical and physical science and studied works of masters like Maxwell, Hertz, and Lodge.
Later as a student in ‘Livorno Technical Institute’, he started experimenting on electromagnetics.
Continue Reading Below
Career
In 1895, incorporating the theories of Hertz, he was capable to develop a basic model of wireless telegraphy. This was largely done in his laboratory which he set up in his father’s estate for experiments.
In 1896, Marconi took the machine to England and found some enthusiastic backers. One of them was William Preece, who was the Engineer-in-Chief in the British Post Office.
Within a year, Marconi was successfully sending broadcasting up to 12 miles, and it was in the latter half of 1896, that Marconi was granted the patent for wireless telegraphy.
In 1897, he started the ‘Wireless Telegraph and Signal Company’ which was renamed as ‘Marconi’s Wireless Telegraph Company’ three years later.
The pioneering inventor sent signals across the English Channel, and established wireless communication between France and England, in 1899. A wireless station was started in South Foreland for communication with Wimereux in France. The same year, British battleships also exchanged messages in a distance of 75 miles.
On September 1899, he equipped two American ships with his machine to report to the newspapers in New York about the progress of America’s Cup, a yacht race.
Guglielmo took his patent for ‘syntonic or tuned telegraphy’ in 1900. The following year, he established transatlantic communication between Cornwall and Newfoundland, thus establishing that Earth’s curvature can never interfere with wireless signals.
The visionary continued with his experiments on stretching the distance of wireless communication and soon established transatlantic services from Canada to Ireland, in 1902. The same year, he talked about daylight effect related to wireless technology.
In 1909, Marconi shared his Nobel Prize with Karl F. Braun. Karl helped to modify the transmitters of Marconi to enhance their usage and range.
Continue Reading Below
Though he was awarded the Nobel Prize for co-discovering the wireless telegraphy his title ‘Father of Radio’ was challenged several times by others. According to claims, Alexander Popov, a Russian scientist was broadcasting between structures; while in India Jagadish Chandra Bose was using radio waves for ringing the bells.
In 1912, he patented ‘timed spark’ system. The initial wireless transmissions used spark technology for communication. Marconi used spark technology to get timed spark in a semi-continuous manner to send and receive messages. Later, it was Fessenden who identified the need of continuous wave transmission for speech.
During the years of 1914 to 1916, he served the Navy rising to the position of Commander.
He was sent on several diplomatic and peace missions to United States and France.
After the war, Marconi was devoted to perfecting the working of short wave radio technology.
In the 1920s, he established the beam system as a way of imperial communication.
In 1931, he worked on still shorter waves leading to the invention of microwave radio telephone link.
Major Works
In 1895, this accomplished inventor first used wireless telegraphy to send signals over distances as long as one and a half miles. Throughout his career he worked on perfecting his technique and telegraph and radio remained highly useful means of communication before the arrival of more sophisticated means of conversation.
Awards & Achievements
Marconi received honorary doctorates from several universities.
Continue Reading Below
He was awarded the ‘Albert Medal of the Royal Society of Arts’, the ‘Kelvin Medal’ and the ‘John Fritz Medal’.
He was decorated with the ‘Order of St. Anne by the Tsar of Russia’.
In 1902, Marconi was honoured with the ‘Grand Cross of the Order of the Crown of Italy’.
He was given the position of ‘Chevalier of the Civil Order of Savoy’ in the year 1905.
In 1909, Marconi shared the ‘Nobel Prize’ for developing wireless telegraphy.
In 1914, Marconi was appointed as the ‘Honorary Knight Grand Cross of the Royal Victorian Order’ in England.
Personal Life & Legacy
In 1905, Marconi exchanged nuptial vows with Beatrice O’Brien. They had three children, a son named Giulio, and two daughters named as Degna and Gioia.
After Guglielmo and Beatrice separated in 1927, the former married Countess Bezzi-Scali of Rome. He had a daughter from the second marriage, Elettra, after which he named his favourite yacht.
On 20th July, 1937, the erudite inventor breathed his last after suffering from multiple heart attacks.
Trivia
In the year 1943, the US Supreme Court declared that Marconi’s radio patent was invalid as other scientists like Nikola Tesla has already discovered certain theories related to wireless telegraphy before him.
Recommended Lists:
Inventors & Discoverers #13

See the events in life of Guglielmo Marconi in Chronological Order 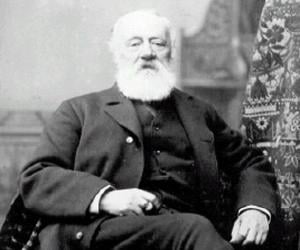