(One of the Most Influential Chefs)

Gordon Ramsay is a British chef whose restaurants have been awarded 16 Michelin stars in total. Though a young Gordon had aspirations of becoming a football player, an injury ended his hopes of establishing a promising career in football. He then went back to college to complete a course in hotel management and trained with some of the world’s leading chefs, such as Albert Roux and Marco Pierre White in London, and Guy Savoy and Joël Robuchon in France. He became the head chef of ‘Aubergine,’ which was awarded two Michelin stars within three years. He set up his own restaurant ‘Restaurant Gordon Ramsay,’ which quickly received the most prestigious accolade in the culinary world – three Michelin stars. ‘Restaurant Gordon Ramsay’ is London’s longest-running three-Michelin-star restaurant and Ramsay is one of only four chefs in the UK to maintain three stars. He has opened a string of successful restaurants across the globe. Having appeared in many reality series and cookery shows, he is known as a television star to the UK and international audience. As a reality television personality, Ramsay is known for his short temper and strict demeanor. He has also authored a number of books, many of which have become bestsellers around the world. By 2004, Ramsay had become one of the best-known and most influential chefs in the UK. Holly Anna Ramsay
DID WE MISS SOMEONE?
CLICK HERE AND TELL US
WE'LL MAKE SURE
THEY'RE HERE A.S.A.P
Quick Facts

British People
British Men
Tall Celebrities
Tall Male Celebrities
Male Chefs
Childhood & Early Life
Gordon Ramsay was born on November 8, 1966, in Renfrewshire, Scotland, to Gordon James Ramsay, a man with no permanent profession and Helen Cosgrove, a nurse. He was raised in Stratford-upon-Avon, Warwickshire, England from the age of five.
He has an older sister named Diane, and two younger siblings, namely Ronnie and Yvonne. His early life was marked by abuse and neglect from his father, whom he later described as a ‘hard-drinking womanizer.’
He played football and was first chosen to play under-14 football at the age of 12. His football career came to an end as he was plagued with injuries.
In 1976, Ramsay and his family settled in Stratford-upon-Avon where he worked as a pot washer in a local Indian restaurant. When he was 16, he moved out of his family home and started living in a flat in Banbury. 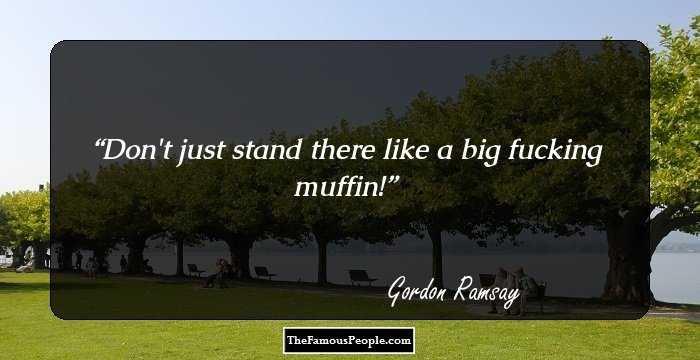 Quotes: Like
Continue Reading Below
Career
By the time he was 19, he had become serious about acquiring a culinary qualification and enrolled at ‘North Oxfordshire Technical College’ to study hotel management.
In the mid-1980s, he worked at the ‘Wroxton House Hotel’ and then at the ‘Wickham Arms.’ Later on, he moved to London, where he worked in a series of restaurants.
He worked for the temperamental Marco Pierre White at ‘Harveys’ for two years and ten months and then decided to study French cuisine. On White’s advice, he began working for Albert Roux at ‘Le Gavroche’ in Mayfair.
After working at ‘Le Gavroche’ for a year, Roux invited him to work with him at ‘Hotel Diva,’ a ski resort in the French Alps. Ramsay later moved to Paris.
He continued in France for three years and benefited from the mentorship of Guy Savoy. He then accepted the less stressful work of a personal chef on the private yacht ‘Idlewild,’ based in Bermuda.
He returned to London in 1993 and was offered the head chef position and 10% share in ‘Rossmore,’ which was owned by White’s business partners. The restaurant was renamed ‘Aubergine’ and won a Michelin star 14 months later.
Wanting to own and run a restaurant himself, he left ‘Aubergine’ in 1998 and opened ‘Restaurant Gordon Ramsay’ in Chelsea, which went on to earn three Michelin stars in four years.
In the next 15 years, he went on to establish a successful chain of restaurants, not just in England but also in places like Glasgow, Ireland, Dubai, Tokyo, New York City, Florida, and Los Angeles.
In 2001, he appeared in the television series ‘Faking It,’ in which he helped a prospective chef and burger flipper named Ed Devlin learn the trade. This episode won the ‘BAFTA’ for ‘Best Factual TV Moment.’
Continue Reading Below
He then appeared in the British television series ‘Ramsay's Kitchen Nightmares.’ Aired on ‘Channel 4,’ the series showcased Ramsay working with the chefs and owners of failing restaurants with an objective of resurrecting the restaurants over a period of one week.
In 2012, he opened ‘The Fat Cow’ in Los Angeles. The restaurant was set up at The Grove, a shopping area popular with tourists who enjoyed visiting the place to relax and enjoy a terrific meal.
‘Hell's Kitchen,’ a reality show on ‘ITV1,’ saw Ramsay train ten British celebrities to be chefs in a restaurant on Brick Lane which opened to the public during the show.
He adapted ‘Hell’s Kitchen’ to suit American audience in a series similar to the original British series and also went on to host a US version of ‘Kitchen Nightmares’ between 2007 and 2010.
In 2010, he was the producer and judge on the US version of ‘MasterChef.’ He also starred in a travelogue titled ‘Gordon's Great Escape’ about his visit to India and hosted the series ‘Ramsay's Best Restaurant.’
Till 2012, he penned 21 books and contributed articles to ‘The Times Saturday’ magazine. Two of his books are his autobiographies, ‘Roasting in Hell’s Kitchen’ and ‘Humble Pie.’
Ramsay made an appearance on the December 2017 broadcast of ‘Please Take Care of My Refrigerator,’ which is a South Korean reality television show.
He has a global partnership with ‘WWRD’ (Waterford Wedgwood, Royal Doulton), which offers home and lifestyle products. 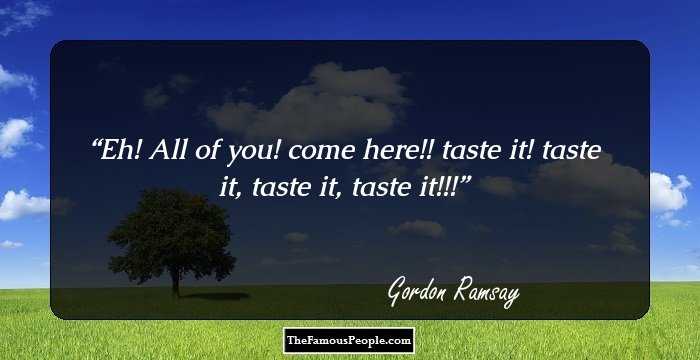 Continue Reading Below
Awards & Achievements
‘Restaurant Gordon Ramsay,’ London was voted ‘Top Restaurant in the UK’ in the London ‘Zagat Survey’ in 2001. In the same year, the restaurant earned its third Michelin star, making Ramsay the first Scottish-born chef to win three Michelin stars.
He was appointed Officer of the Order of the British Empire in the 2006 honors list for services to the hospitality industry.
In 2006, he became only the third person to have won three ‘Catey’ awards, the biggest award of the UK hospitality industry, when he won the award for ‘Independent Restaurateur of the Year.’
‘Restaurant Gordon Ramsay’ at Royal Hospital Road, London, is acknowledged for its perfect food execution and service. The food served at the restaurant has been described as ‘classic cooking; sophisticated, well-edited and flavor-first.’ The restaurant was voted London's top restaurant for eight years by ‘Harden's.’ In 2008, it was replaced by ‘Petrus,’ a restaurant run by Ramsay's former pupil Marcus Wareing.
In 2013, he was inducted into the ‘Culinary Hall of Fame.’
Personal Life & Legacy
Ramsay married Cayetana Elizabeth Hutcheson alias Tana, a Montessori-trained schoolteacher, in 1996. They have four children, Megan, Holly, Jack and Mathilda and live in Battersea, South London.
This short-tempered yet highly likable chef has a net worth of $190 million. His salary per TV episode is $225,000 and he earns an additional $10 million per year from media and restaurants.
In 2014, Ramsay and his wife Tana set up the ‘Gordon and Tana Ramsay Foundation’ to make a meaningful difference to charities. The foundation is currently partnered with ‘Great Ormond Street Hospital.’ 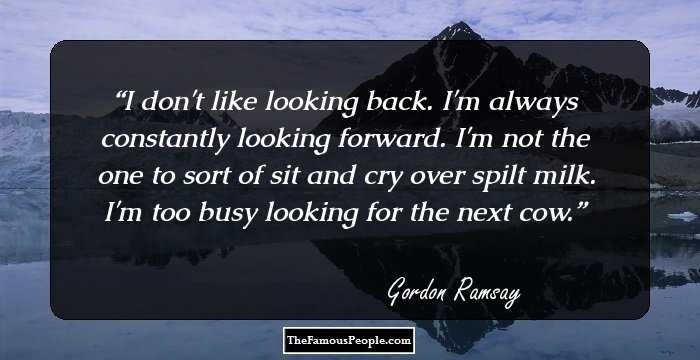 Trivia
This celebrated British chef once told ‘Forbes’ in an interview that he'd want to have roast beef with Yorkshire pudding and red wine gravy as his last meal.
This chef revealed one of the secrets to his success. He said, “If you want to become a great chef, you have to work with great chefs. And that's exactly what I did.”
Since 2017, he has been judging fans' food on his Twitter account at their request.

Quotes By Gordon Ramsay | Quote Of The Day | Top 100 Quotes

See the events in life of Gordon Ramsay in Chronological Order