Advanced Search
Jamie Oliver is a famous British chef, restaurateur, author of cookery books, and media personality. The appeal and reach of many of Jamie Oliver’s dishes lies in the simplicity of his recipes and the relatively short preparation time for each of his dishes. His speciality is Italian cuisine. Fans and followers throughout the world have re-discovered the joy of cooking through his many fresh and delicious dishes and his countless books. An outspoken campaigner for a healthy system of cooking foods and maintaining a balanced diet, he has had a love-hate relationship with his viewers and critics and has become a popular media magnate. He has also appeared on a number of food and cooking-related reality shows, where he was called for his expertise and guidance or as a judge. He ardently rages an unrelenting crusade against unhealthy eating through his television shows, and cookbooks. A passionate supporter of the use of local produce and quality ingredients in cooking, his activism has resulted in him going head-to-head with residents of cities and animal rights groups. Although he started his career as a pastry chef, he now owns and co-owns several leading restaurants, related enterprises and non-profit organizations throughout the world. To learn more information about this remarkable chef and businessman, scroll further. awards: 2003 - MBE (Most Excellent Order of the British Empire)

British People
Media Personalities
British Men
Male Chefs
Briton Chefs
Childhood & Early Life
Jamie Trevor Oliver was born to Trevor and Sally, owners of a pub and restaurant called ‘The Cricketers’, where he began working at the age of 8. By the time he was 11, he could outdo the kitchen staff with his chopping skills.
In 1989, at the age of 14, Jamie formed the band, ‘Scarlet Division’ with composer and musician, Leigh Haggerwood.
Two years later, after an ordinary school life at Newport Free Grammar School, he joined Westminster Catering College and then, obtained a City and Guilds National Vocational Qualification (NVQ) in home economics. 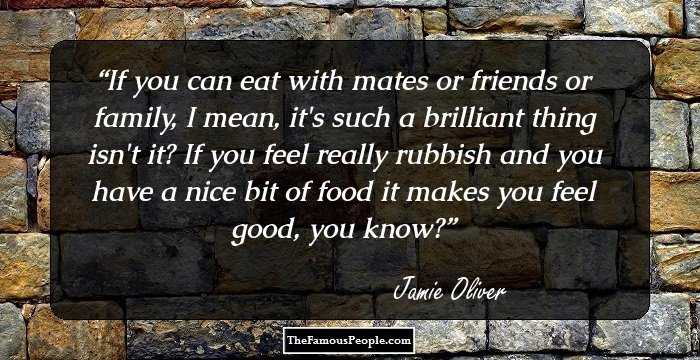 Quotes: You, Family, Friends, I
Continue Reading Below
Career
Although, he started his career as a pastry chef at Antonio Carluccio's Neal's Yard under his mentor Gennaro Contaldo, it was as a sous chef at ‘The River Cafe’ that Jamie Oliver was recognized and was catapulted onto a world cooking platform.
His show, ‘The Naked Chef’ debuted on BBC Two on April 14, 1999 and ran for three seasons.
In 2000, he launched ‘Pukka Tukka’ on Channel 4 and signed a $2-million deal with the UK supermarket chain Sainsbury's. Although it made him richer by $1.2 million every year, the relationship soured due to his disdain for supermarkets.
In 2002, his show, ‘Jamie’s Kitchen’, a documentary series, had a successful run. The show followed Jamie Oliver as he as he attempts to train a group of fifteen disadvantaged youth. The concept of the show included that those who complete the course will be offered jobs at Oliver's new restaurant ‘Fifteen’. Out of the fifteen contestant five managed to secure a job.
In 2003, the four-part sequel to ‘Jamie’s Kitchen’, ‘Return to Jamie’s Kitchen’ was launched. He was voted the ‘Most Inspiring Political Figure’ for the ‘Feed Me Better’ campaign that worked toward cutting out junk food in the diets of British schoolchildren. The British Government pledged to $280 million on school dinners.
‘Jamie's Great Italian Escape’ was a six-part travelogue series released in 2005, wherein the chef travelled around Italy in a blue VW van and his personal experiences and adventures with cooking. The following year, ‘Jamie’s Kitchen Australia’ was aired in Australia.
In June 2008, he launched ‘Jamie's Italian’, a business venture in England and followed it up with ‘Jamie's Fowl Dinners’ the same year.
‘Jamie Saves Our Bacon’, which aired in 2009, drew the world’s attention to pig farming in the UK and EU. He followed that up with ‘Jamie’s American Road Trip’ and ‘Jamie’s Family Christmas’. Later that year, he raised $22 million to fund his Italian restaurants in Asia.
‘Jamie Oliver's Food Revolution’ aired in 2010, attempted to improve eating habits of city residents. For the first season, Oliver visited Huntington, West Virginia, statistically one of the unhealthiest cities in the US. The show won an Emmy for Outstanding Reality Programme. For the second season to be aired in 2011, Oliver chose Los Angeles. However, his attempts to make changes in school meals in Los Angeles were rebuffed and he was barred from shooting there and the show was cancelled.
Continue Reading Below
‘Jamie's 30-Minute Meals’ aired in 2010, focused on simple, home-cooked meals that could be assembled in 30 minutes.
2011 was a particularly hectic year for Oliver. He worked on ‘Jamie’s Dream School’, ‘Jamie’s Fish Supper’, ‘Jamie Cooks Summer’, and ‘Jamie’s Britain’.
In 2012, he appeared on MasterChef Australia and scored higher than the three contestants he was up against. He also worked on ‘Jamie's 15-Minute Meals’, ‘Jamie & Jimmy’s Food Fight Club’, and invested in the Maison Publique, Montreal.
In 2013, he became the chef and proprietor of ‘Jamie Oliver’s Diner’. 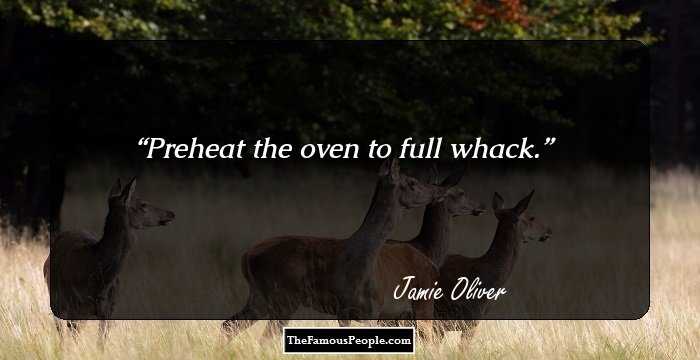 Major Works
His first TV series The Naked Chef that ran from 1999 to 2001, dealt with simple yet delicious dishes that could be cooked easily. The success of the programme led to the publication of the books, ‘Return of the Naked Chef’ and ‘Happy Days with the Naked Chef’.
Awards & Achievements
In 2003, this celebrity chef was awarded an MBE in the Queen's Birthday Honours.
In 2009, he was awarded the 2010 TED Prize for his campaign to ban unhealthy food in British schools.
In 2013, Jamie Oliver was inducted into the ‘Culinary Hall of Fame’.
Personal Life & Legacy
Oliver married former model Juliette Norton, in 2000. They have five children; Poppy Daisy, Petal, Buddy and River.
Trivia
This popular chef is dyslexic. He read his first novel ‘Catching Fire’, for the first time in 2013, at the age of 38.
In 2005, he received flak from animal rights groups for slaughtering a fully conscious lamb on his TV show.
In 2010, he joined several other celebrity chefs to raise awareness of the discarding of saltwater fish.
Recommended Lists:
Media Personalities #73
Food Experts #4

See the events in life of Jamie Oliver in Chronological Order