Isaac Crew is a famous British model who later turned into a professional chef. He has worked as a model for big brands such as Hermes, Valentino, Zara, Lee, and Moschino before steering himself to focus on cuisine. He enrolled at Thanet College’s culinary program and later joined Gordon Ramsay’s group to train himself under the celebrity chef Gordon Ramsey. He worked in different restaurants over the years under different chefs, trying to hone his skills. He then started his blog and later a YouTube channel ‘The Dirty Dishes,’ which received a huge fan following as it aimed at affordable and easy recipes for Generation Y and Z. He also worked as a model alongside being a chef and appeared in leading editions of GQ, ELLE Man, and Dazed. He was the judge for GQ’s 2018 Grooming Awards. His book ‘The Dirty Dishes’ will be released in 2019. He has crafted recipes that aim at young cooks and focus on comfort foods. He is currently represented by Independent Talent Group and Next Management. He is also popular on social media and has over 324k followers on Instagram. British People
British Men
Male Chefs
Aries Models
Male Models
Career
Since Isaac Carew’s father was also a chef, Isaac was often asked to do odd jobs at the restaurants and work in the kitchen. This ignited in him an interest for cooking. His father and godfather were chefs who ran their own kitchens. This allowed him plenty of opportunity to explore the world of food. As a child, the only subject Carew was interest was in Home Economics. He also was diagnosed with dyslexia, which didn’t allow him to excel at academics. He thus decided to focus on cooking. He studied culinary arts at Thanet College and later started working at a pub in Kentish Town. He decided to join the Gordon Ramsay Group in his late teens and hasn’t looked back since. He trained under Angela Hartnett, the Michelin-star chef, at The Connaught in Mayfair. He considers her his mentor and attributes his success to this period of his life. He had several 18-hour shifts and learnt to master the discipline under Hartnett. He confessed to learning more in two weeks with Angela than he did in two years at culinary school.
Meanwhile, to supplement his income, he decided to become a model after being scouted outside Selfridges. He went on to become one of the most popular models in the circuit and appeared in campaigns for brands such as Valentino, Moschino, Issey Miyake, and Hermes. He worked with the famous photographers Ranking and Nick Knight, who shot him around the world for several campaigns. His Reiss and Swatch campaigns made him even more popular. Isaac continues to dabble between being a model and chef. He has various agencies across the world representing him, while the coveted Next Management is his main agency in the United Kingdom.
In 2016, he created ‘The Dirty Dishes’ blog (and later a YouTube channel) after realizing the dearth of recipes that simply focus on comfort food for the millennials without succumbing to fads and other market trends. His video tutorials showed Carew cooking up things he loved when growing up. This became a huge hit, and he was invited to feature in the Channel 4 series ‘Tried and Tested: The Ultimate Shopping List with Michel Roux Jr.’ in 2017. He served as the right-hand man of Michel Roux Jr, and the duo travelled all over Britain to come up with a definite guide of the best food and drink options available.
He is currently working on his book ‘The Dirty Dishes’ which is scheduled to be published in early 2019 by Bluebird Publishers. The book features 100 recipes that are easy to make. His long-term plan involves owning his restaurant at Soho. He wants to create an intimate space where people would be drawn in by the sheer comfort of the food cooked by him.
You May Like

Briton Chefs
Briton Models
British Fashion Industry
Briton Food Experts
Continue Reading Below
Other Initiatives
Isaac Carew also has his own label ‘Mercy & Wild’. He founded this along with Ty Akingbola, a marketing guru, to give something back to the society. The brand offers a variety of shirts and does not follow any fashion trend. Over 25% of the proceeds go to various fundraisers and charities.
Recommended Lists:

Aries Men
Personal Life
Isaac Carew was born on March 24, 1986 in London, England. He grew up in the Hackney borough. He is currently in a relationship with Dua Lipa, an English singer. They previously dated each other for three and half years before splitting in 2017 due to conflicting schedules. They recently got back together in May 2018 and are often seen vacationing together across the world.
Trivia
His favorite restaurants in London are Bone Daddies, Patty & Bun, BAO, and Pollen Street Social.His ideal first date involves visiting the Natural History Museum in London. 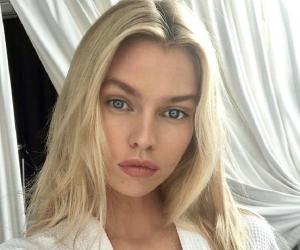