Advanced Search
George B. McClellan was an American soldier, political leader, railroad executive and civil engineer. McClellan began his military career as a second lieutenant and served in the 'Mexican-American War.' He later quit the army to work in railroads, but re-joined the army as a major general during the 'American Civil War.' He played an important role in organizing union forces during the initial phase of the ‘American Civil War,’ but he was criticised for his repeated failures to aggressively go after Confederate army. His 'Peninsula Campaign' failed after the 'Seven Days Battle' and he lost the 'Battle of Antietam' against ‘Confederate troops.’ As a result of this, President Lincoln removed him from command in November 1862. In 1864, the Democratic Party nominated him for the presidency against Abraham Lincoln. He later served as governor of New Jersey. Founder/Co-Founder: Army of the Potomac

See the events in life of George B. McClellan in Chronological Order 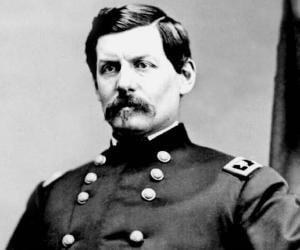