Advanced Search
Referred to as ‘a prophet of the times’ by Pope Pius XII, Fulton J. Sheen devoted his entire life to Catholicism. He was one of the most influential figures in the twentieth-century, who played a pivotal role in spreading the message of god. This preacher and pastor of American Catholicism was the first American to receive the Cardinal Mercier Prize for International Philosophy. A prolific writer, Sheen authored more than 73 books and also wrote many extensive columns and articles for various prestigious publications. He took over the air waves with his immensely popular radio show, ‘The Catholic Hour’ and later went on to host the TV show, ‘Life is Worth Living' and 'The Fulton Sheen Program'. He is also a recipient of the Emmy Award. He is now referred to as the Venerable Servant of God, which was conferred upon him by Pope Benedict XVI. He is much revered, for his television preaching, which attracted an unprecedented number of people, from presidents, common men to children and women from all walks of life. Thus, he is widely recognised as one of the first televangelists. James Dobson
DID WE MISS SOMEONE?
CLICK HERE AND TELL US
WE'LL MAKE SURE
THEY'RE HERE A.S.A.P
Quick Facts

American Celebrities
Philanthropists
Pastors
Preachers
American Men
Childhood & Early Life
He was born as Peter John Sheen in El Paso, Illinois to Newton and Delia Sheen. He had three siblings and he was the eldest. He was later baptised as Peter John Sheen.
When his family relocated to Peoria, Illinois, he took part in a church activity for the first time in his life. He was assigned the role of an altar boy at St. Mary's Cathedral.
He attended the Spalding Institute in Peoria, from where he received high school valedictorian honours in 1913. He later attended the St. Viator College in Bourbonnais, Illinois, and the Saint Paul Seminary in Minnesota.
On September 20, 1919, he received his ordination. Subsequently, he went on to pursue his higher education at The Catholic University of America in Washington, D.C.
In 1923, he obtained a doctorate in philosophy from the Catholic University of Leuven in Belgium. There he became the first American recipient of the Cardinal Mercier award, which was conferred upon him for his philosophical treatise.
In 1924, he went on to pursue his education further and earned a Sacred Theology Doctorate from the Pontificium Collegium Internationale Angelicum. This later became Pontifical University of Saint Thomas Aquinas, Angelicum. 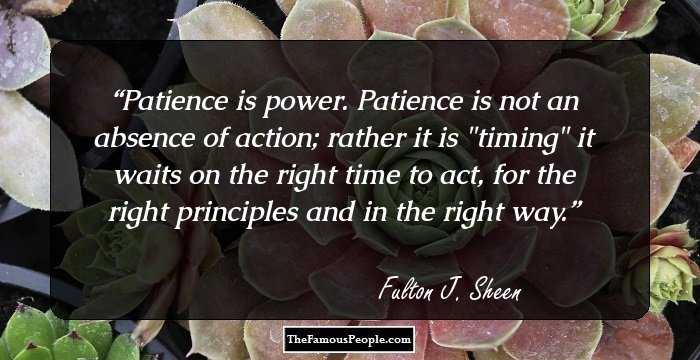 Quotes: Time
Continue Reading Below
Later Life
He served as an assistant pastor at the St. Patrick's Church, Soho Square in London. At the same time, he was also teaching theology at St. Edmund's College, Ware.
In 1925, he published his book titled, 'God and Intelligence in Modern Philosophy', which was a critical Study in the Light of the Philosophy of Saint Thomas.
In 1926, he was ordered by Bishop Edmund Dunne of the Roman Catholic Diocese of Peoria, Illinois, to serve at St. Patrick's Parish. After nine months, he began to teach philosophy at Catholic University.
In 1929, he delivered a talk at the National Catholic Educational Association, where he stressed on the fact that education was necessary for Catholic Renaissance in the U.S.
In 1930, he started ‘The Catholic Hour’, which was a radio show that was broadcast every Sunday night. On the show he once referred to Adolf Hitler as ‘anti-Christ’.
In 1934, he came out with his book titled, ‘The Eternal Galilean'. In the book he elaborated on the life of the Son of God and wrote about the characteristics of Jesus.
On June 11, 1951, he was consecrated a bishop. Subsequently, he served at the Archdiocese of New York as an Auxiliary Bishop. The following year, his TV show, 'Life is Worth Living', began airing on the DuMont Television Network.
In 1954, he published his book titled, 'Life of Christ'. This became one of his highly acclaimed books, in which he elaborated on the Birth, Life, Crucifixion, and Resurrection of Christ.
His TV show, 'Life is Worth Living' ran successfully until 1957, gaining a sizeable viewership. The following year, he was appointed by the Society for the Propagation of the Faith as its national director.
Continue Reading Below
In 1961, he host another TV show, 'The Fulton Sheen Program', which became a nationally syndicated series. The show followed an almost similar pattern to his earlier show, 'Life is Worth Living'.
On October 26, 1966, he received an appointment as the Bishop of Rochester, New York. During this time he was also hosting the TV show, 'The Fulton Sheen Program'.
In July, 1967, he spent much of his time on campaigns that aimed to encourage the denunciation of the Vietnam War. That year, he also wanted to donate St. Bridget’s Parish building to the federal Housing and Urban Development program but this was rejected by higher authorities of the church.
On December 12, 1967, he established the Sheen Ecumenical Housing Foundation. The main objective of this foundation is to provide affordable housing to impoverished sections of society.
In 1974, he was invited by the Archbishop of Washington to speak at the Loyola Retreat House in Faulkner, Maryland, during a retreat for diocesan priests. His speech was recorded on reel-to-reel tape.
He requested that the speech he gave be produced into an album. This facilitated the establishment of ‘Ministr-O-Media’, which released the speech as an audio tape titled, 'Renewal and Reconciliation'.
‘Ministr-O-Media’, became one of the biggest distributers of non-music tapes. This generated lot of income. 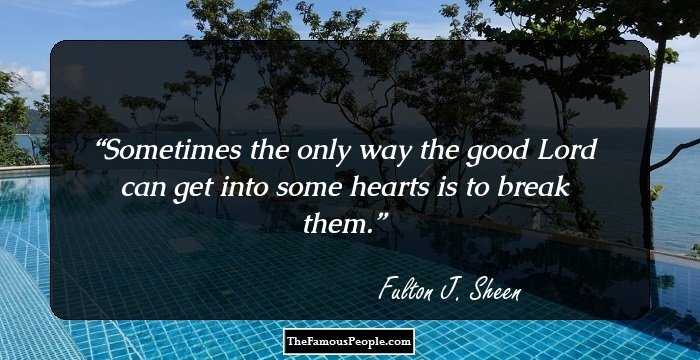 Awards & Achievements
In 1952, he received the Emmy Award for the category of ‘Most Outstanding Television Personality'.
Personal Life & Legacy
While he was an infant, he contracted tuberculosis.
He suffered from heart problems, for which he underwent surgery at the Lenox Hill Hospital. He passed away at the age of 84 due to heart problems. He was laid to rest at the St. Patrick's Cathedral.
Materials like his papers and TV programmes are kept at St. Bernard's School of Theology and Ministry in Rochester, New York
In 1980, his autobiography titled, 'Treasure in Clay: The Autobiography of Fulton J. Sheen' was posthumously published. 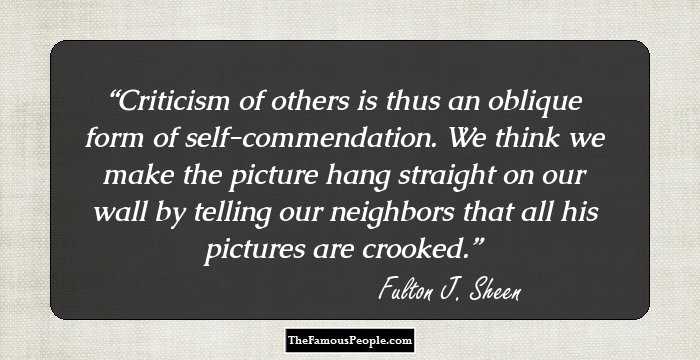 Quotes: Think
Trivia
While Pope Pius XII referred to him as ‘a prophet of the times’. In 2012, he was declared Venerable Servant of God by Pope Benedict XVI.

See the events in life of Fulton J. Sheen in Chronological Order