If you have ever watched ‘Enjoying Everyday Life’, a Joyce Meyer Ministries programme, you would have often wondered how can a victim of sexual and emotional abuse talk so assuredly about God’s grace, His plans and His love. Joyce Meyer is definitely ‘blessed’. A charismatic Christian speaker and author, Meyer went through a great deal of turmoil in her early life but rose from them all to build one of the world’s largest Christian ministries in the world. Her books have helped millions of people find hope and restoration in Jesus Christ and her programme commits at redeeming the words of Jesus Christ by helping people inculcate them in their life. She claims that it was God’s words that helped upturn her doomed life. She serves as a practical Bible teacher, sharing her experiences and testimony and her life-changing message from God. Lately, Meyer has earned wrath from the media for her excessively extravagant lifestyle. However, unscathed by the comments, she continues in her effort to help others redeem their life.
Continue Reading Below 8426
4th June In History
DID WE MISS SOMEONE?
CLICK HERE AND TELL US
WE'LL MAKE SURE
THEY'RE HERE A.S.A.P
Quick Facts

American People
Writers
Pastors
American Women
Gemini Writers
Childhood & Early Life
Joyce Meyer was born as Pauline Joyce Hutchison on June 4, 1943 in St Louis. Young Joyce was taken care of by her mother initially, as her father served the army during the Second World War.
After her father’s return from the army, Joyce was shattered, as he abused her not just sexually but mentally, emotionally and verbally as well. He was a controlling person.
The exploitation left a deep imprint on the being of Joyce as she developed a derogatory sense of self. Though she looked perfect to onlookers, Joyce had become a victim of multiple personality disorder. She went to school but could not concentrate; neither was she allowed to participate in any after-school activities.
At a young age, Joyce was filled with a sense of self-pity. She was hardly manageable and developed a controlling, manipulative, insecure and harsh behaviour. She experienced a feeling of guilt and adopted a negative thinking that was powered by suspicion. Worst was that she never felt safe anywhere.
Despite being victim of the maltreatment, Joyce did not give up on her studies and completed her graduation from O’Falllon Technical High School in St Louis. 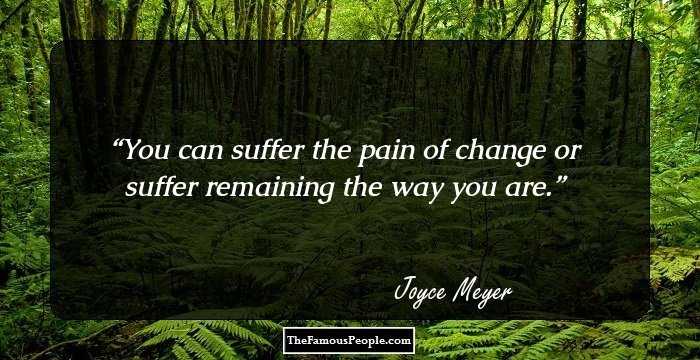 Quotes: You, Change
Continue Reading Below
You May Like

The Sexiest Men Of 2020, Ranked
Career
Following her graduation, Joyce went into the wedlock with a part-time car salesman but the marriage hit the rocks in just five years. She then married Dave Meyer in 1967. Meyer had an influential effect on Joyce, who with his support and encouragement calmed down a bit.
It was while driving to work in 1976 that she claims to have received a personal message from God. The incident left a deep impact on her as she discovered a real love for God’s Words and inculcated an ability to understand and comprehend it completely.
After receiving the message from God, she became a member of Our Savior's Lutheran Church in St. Louis, a congregation of the Lutheran Church–Missouri Synod. She got a start at the ministry by taking up the chair of a teacher at a local cafeteria for an early-morning class.
She became an active participant of the Life Christian Center, a charismatic church in Fenton. Soon she was appointed as the church’s associate pastor. Her teachings of the Bible gained so much popularity that the church became one of the leading churches in the area.
Her popularity as the Bible teacher gained her much prominence and reputation. Adhering to the overwhelming demand, she commenced a daily 15-minute radio broadcast on St Louis radio station
In 1985, she resigned as an associate pastor and founded her own ministry. It was earlier named, ‘Life in the Word’ and was started on the Superstation WGN in Chicago and Black Entertainment Television (BET). She was offered to air her show on six different radio stations, spreading from Chicago to Kansas City.
In 1993, her husband, Dave Meyer, persuaded her to expand her network to television as well. Subsequently, a television ministry was started under the name, ‘Enjoying Everyday Life’ which became a huge hit.
Operational till date, ‘Enjoying Everyday Life’ is broadcast in 40 languages on 900 TV and radio stations, potentially catering to more than 4.5 billion viewers across the globe. Headquartered in Missouri, it has a workforce of about 1000 employees in its 12 satellite offices.
Through Joyce Meyer Ministries, she teaches on a number of topics focussing on mind, mood, mouth and attitude. What has made her show irresistible is the fact that she candidly communicates about her experiences and her learning and inspires viewers to learn from them and apply the same in their life. Her practical approach to Bible is quite unique and ground-breaking.
Continue Reading Below
Over the years, she has authored nearly 100 books, which have been translated in more than 100 languages and have catered to about 12 million readers. The extensive demand of the books and super successful response from readers and critics has led her to become one of the New York Times bestselling authors.
In addition to hosting a television ministry and writing books, Joyce conducts several domestic and international conferences every year that motivate people to start enjoying their everyday life. Her annual women conference has been quite a big hit, amassing more than 200,000 women from across the globe per year.
Joyce claims that it is through her teachings that she aims at meeting the needs of the suffering and make people reach out to Gospel in a practical way. For the same she commenced Hand of Hope, a foundation that serves as the mission arm of Joyce Meyer Ministries. It runs several programs, providing food, medical care and disaster relief supplies.
In 2000, she co-founded the St Louis Dream Center along with her husband. The Center aims at serving the inner city through hands-on program that are targeted at treating the needy, lost and hurt through the love of Christ.
Despite the good work done by Joyce to the society, she has earned the wrath of people and her critics for being over indulgent and leading an ultra-luxurious lifestyle. However, she has fended off all the criticism by stating that she does not need to defend herself for being ‘blessed’.
It was due to her excessive and extravagant lifestyle that in 2004 St. Louis Christian television station KNLC, operated by the Rev. Larry Rice of New Life Evangelistic Center, dropped her programme. Yet another reason for the cancellation was her teachings, which Rice claimed go ‘beyond Scripture’
In 2009, Joyce Meyer Ministries received accreditation from the Evangelical Council for Financial Accountability (ECFA). 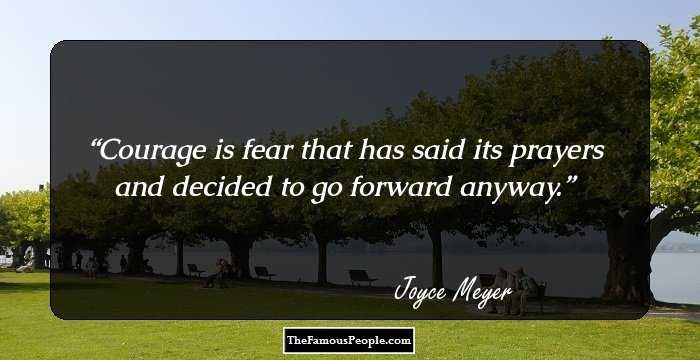 Quotes: Fear
Major Works
Joyce Meyer commenced a television ministry that has today become one of the largest Christian ministries of the world. Its programme ‘Enjoying Everyday Life’ is viewed by more than 4.5 billion viewers and is broadcast in 40 languages on 900 TV and radio stations. Her programme helps millions of people find hope and restoration in Jesus Christ. She aims at redeeming the words of Jesus Christ by making people instil them in their life.
Personal Life & Legacy
Following her graduation, she went into the wedlock with a part-time car salesman. However, hopes of a better future crashed as her husband cheated on her frequently. The marriage did not last long and the two were divorced after five years.
After her divorce, Joyce met Dave Meyer, an engineering draftsman, through a mutual co-worker of Meyer and her father. The two hit it on almost instantly and finally got married on January 7, 1967. They are blessed with four childen - two sons: Daniel B. Meyer and David Meyer and two daughter: Laura Marie Hotzmann and Sandra Ellen McCollom. 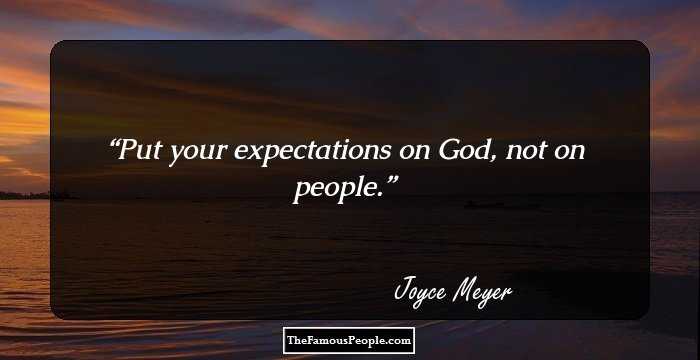 Quotes By Joyce Meyer | Quote Of The Day | Top 100 Quotes

See the events in life of Joyce Meyer in Chronological Order