Federico García Lorca was a celebrated Spanish writer, known for his poems and plays, mainly the famous 'Romancero Gitano'. The collection of eighteen poems by this celebrated poet, translated into English as ‘Gypsy Ballads’, is known for their language and lyricism, describing the life of gypsies in his hometown. He has also written other well-known poems like 'Seis poemas gallegos', 'Quimera', and 'Libro de poemas'. His plays are also quite famous, some of them being, 'El maleficio de la mariposa', 'Retablillo de Don Cristóbal', and of course 'La zapatera prodigiosa'. This Spanish poet and playwright created quite a stir during his lifetime, owing to his public acceptance of being a homosexual. His relationship with the famous surreal artist Salvador Dalí was a topic of constant speculation. He was also known for his socialist views, often bending towards leftist ideals. When this renowned writer was assassinated, his murder gave rise to a lot of conjectures. Some are of the opinion that it could be his connection with the 'Popular Front’ that followed 'Marxism', while others think it was his being openly gay. Despite all speculations, he is remembered today as one of the finest writers that Spain has ever produced Rafael Alberti
DID WE MISS SOMEONE?
CLICK HERE AND TELL US
WE'LL MAKE SURE
THEY'RE HERE A.S.A.P
Quick Facts

Spanish Celebrities
Directors
Playwrights
Spanish Men
Columbia University
Childhood & Early Life
Federico del Sagrado Corazón de Jesús García Lorca was born to Federico García Rodríguez and Vicenta Lorca Romero, on June 5, 1898, in the Fuente Vaqueros village of Spain. Rodríguez was a farm owner, while his wife Vicenta was a pianist and a teacher.
In 1909, the family settled down in Granada, where the young child grew up and pursued his education.
Federico studied literature, law, and composition at the 'University of Granada' in 1915. He had a flair for classical music and theatre as a student, and he was trained in playing the piano. 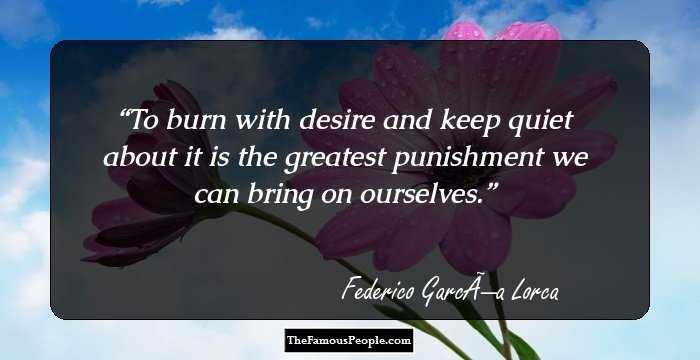 Continue Reading Below
Career
The following year, he started writing, after being motivated by one of his professors. 'Impresiones y Paisajes' ('Impressions and Landscapes'), his first book was published in the year 1918.
In 1919, García joined the 'Residencia de estudiantes', a cultural centre in Madrid. It was here that he got acquainted to future filmmaker, Luis Buñuel, artist Salvador Dalí, dramatist Eduardo Marquina, and poet Juan Ramón Jiménez.
During 1919-20, Lorca penned his first play, 'El maleficio de la mariposa' ('The Butterfly's Evil Spell'). The drama, which spoke about the love affair of a butterfly and a cockroach, was soon written off by the audiences, for being unusual.
García began writing the poem 'Suites' in 1920, but it remained incomplete, and three years later, the poet gave up working on it.
In 1921, he published 'Libro de poemas' ('Book of Poems'), which consisted of works dealing with religion and nature.
From 1923-25, García authored several plays including 'Retablillo de Don Cristóbal' ('The Puppet Play of Don Cristóbal'), 'Mariana Pineda', and 'Lola, la Comedianta' ('Lola, the Actress'). The latter was written in association with Manuel de Falla, a Spanish music composer, but the opera remained incomplete.
In 1926, the prolific writer penned the play 'La zapatera prodigiosa' ('The Shoemaker's Prodigious Wife'). The play dealt with the relationship shared by a docile shoemaker and his bad-tempered wife.
The following year, 'Mariana Pineda' was staged with Salvador Dalí as the art director and was quite well-received.
In 1928, this brilliant poet wrote 'Romancero Gitano' ('Gypsy Ballads'), which is considered, even today, as one of his best works. The same year, he also penned poems, 'Odes', 'Quimera', and the drama, 'Amor de Don Perlimplín con Belisa en sujardín' ('Love of Don Perlimplín and Belisa in his Garden')
Continue Reading Below
The next year, Lorca went to the United States, accompanied by friend Fernando de los Rios. The exceptional writer joined the 'Columbia University School of General Studies', while Rios took up the job of a teacher.
In 1930, when he came back to Spain, ruler Primo de Rivera had been ousted. The same year, he wrote the compilation, 'Poeta en Nueva York'.
The following year, García took up the job of a theatre director at the 'Teatro Universitario la Barraca', affiliated to the 'Ministry of Education'.
From 1931-34, this writer inked the famous poems 'Así que pasen cinco años' ('When Five Years Pass'), and 'Yerma'. He also wrote the play, 'Bodas de sangre' ('Blood Wedding'), during the same period.
The next year, he composed 'Seis poemas gallegos' ('Six Galician poems'). He also penned the drama, 'Doña Rosita la soltera' ('Doña Rosita the Spinster') in 1935.
In 1936, he published his last poetry compilation, 'Sonnets to his Dark Love' which drew speculations about whether they were written for Rafael Rodríguez Rapun, or the young Juan Ramírez de Lucas, both of who were Lorca's love interests. Recently, it was confirmed that his final work was dedicated to Juan Ramírez. 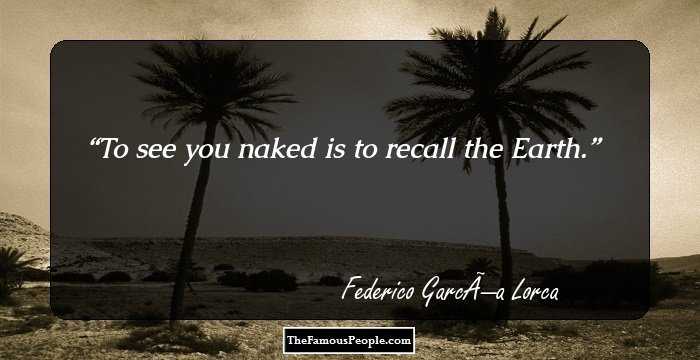 Quotes: You
Major Works
‘Romancero Gitano’ is considered even today as one of the most famous poetic work by Federico García. The collection, consisting of eighteen octosyllabic poems, talk about gypsies in the towns of Seville, Granada and Cordoba.
Personal Life & Legacy
From 1925, García was passionately in love with artist Salvador Dalí, who though shared the same emotions, did not become physically involved. The friendship between the two creative minds lasted till Dalí got married to a woman named Gala.
Continue Reading Below
Just before the ‘Spanish Civil War’ started, the writer, who was open about his socialist ideals, travelled home to Granada. Lorca was taken into police custody after the murder of Granada mayor Manuel Fernández-Montesinos, who was also the former's brother-in-law.
On August 19, 1936, the writer was shot to death, but the motive behind his assassination is still under speculation. While many believe it was his political ideals and support for the 'Popular Front', others are of the opinion that he was murdered because of his sexual orientation.
The 'Lorca Foundation' has been established by the writer's niece, with the aim of spreading awareness about the famous poet's works. Also, his house, 'Huerta de San Vicente', has been converted into a museum.
A statue has been built in the 'Plaza de Santa Ana', Madrid, as a tribute to this celebrated writer.
The poet has also been depicted in several works of literature and art, including 'A un poeta muerto', which is an elegy composed by Luis Cernuda. American poets Gary Glazner and Bob Kaufman have written poems, both titled 'Lorca', commemorating the Spanish writer.
Famous Chilean poet, Pablo Neruda, has penned two poems in honour of García. Even Bengali musician, Sunil Ganguly had written 'Kobir Mrityu-Lorca Smarane', to honour the talented poet.
Plays like 'Lorca in a Green Dress', and 'The Ghost of Federico García Lorca Which Can Also Be Used as a Table', talk about the writer's life and afterlife. The films 'Death in Granada', and 'La luz prodigiosa', amongst others, describe the murder of the poet and the suppositions surrounding the event. 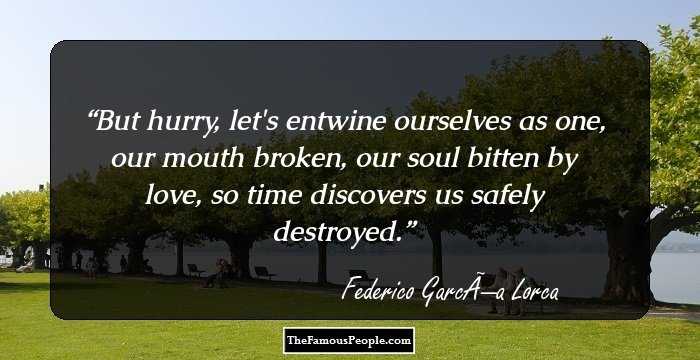