Miguel de Cervantes Saavedra was a Spanish author, poet and playwright of the 17th century. His ‘Don Quixote’ is considered to be the first model novel of the modern literary style. His impact on the Spanish language and literature is so huge that Spanish language is sometimes known as ‘la lengua de Cervantes’ (the language of Cervantes). His novels, poetry and plays are full of intelligent satire and expressions that are easy for a regular reader to relate with. This is the reason why he was known to be ‘El Principe de los Ingenios’, which means ‘The Prince of Wits’. He was born in Madrid in a poor family, his father worked as a barber-doctor and wandered from city to city, looking for work. Cervantes studied architecture, literature and art in Rome for some time when he was young and then later on joined the Spanish navy. It was while serving in the navy that his left arm got brutally wounded and he could not use it thereafter. He considered it as a symbol of honor as he was fighting for his country. He led a poor life until his ‘Don Quixote’ became famous. The novel did not bring him much money but established him as an important literary figure. Spanish People
Novelists
Playwrights
Spanish Men
Libra Poets
Childhood & Early Life
Miguel de Cervantes was born on the 29 September 1547, in a place near Madrid in the city of Alcala de Henares, Spain. He was born to a surgeon Don Rodrigo de Cervantes and dona Leonor de Cortinas. His father was of Galician decent and wandered from one place to another in search of work.
His was the fourth child of Rodrigo and Leonor. His mother and father got married under difficult circumstances when his mother’s father had to sell her to Rodrigo, as he was a nobleman who had lost his fortune. Due to such an awkard nature of their marriage, Cervantes’s mother led a very unhappy married life as his father used to have affairs with other women. His mother died in 1593.
Not much is known of Cervantes’ life as it is not documented anywhere properly except for the fact that he wandered around from place to place with his parents as his father had to struggle to get some work. He had a difficult childhood as the whole family constantly struggled with poverty. It is not properly known whether he studied during his early years or not, some researchers say that he studied at the University of Salamanca.
When Cervantes was only a young boy, he fell in love with a barmaid called Josefina Catalina de Parez. They both were planning to elope together but Cervantes’ father got to know about their plan of running away and asked Josefina to stay away from his son because of their poor financial situation. 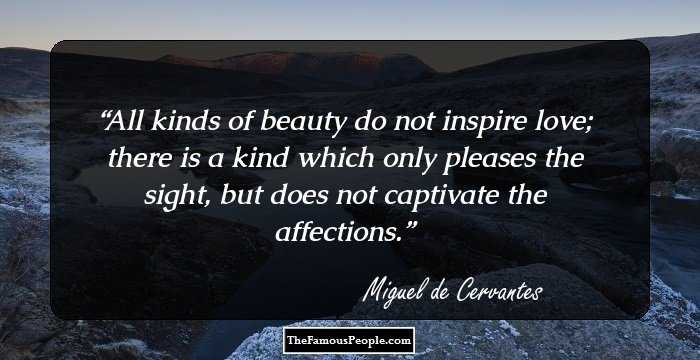 Continue Reading Below
Career
In his younger days, Cervantes left his family and went away to Italy to study in Rome in all its majestically rich architecture, history and literature. He focused on the Renaissance poetry, art and architecture. In a number of his works later, Italy and its enriched beauty has been shown. It is not fully known why he left Spain and went to Italy, whether he was running away from a royal warrant of his arrest or any other mystery.
In 1570, Cervantes joined the Spanish Navy Marines called the ‘Infanteria de Marina’, which was posted in Naples at the time. He served in the army for a year. In 1571, he sailed with the galley fleet of the Holy League called Marquesa to take part in the Battle of Lepanto. Although he was suffering from fever at the time but he requested to be allowed to take part in the battle so that he can serve for the honor of his king and the God.
He got wounded during the Battle of Lepanto, therefore for the next 6 months he remained in hospital. Until 1575, Cervantes served as a soldier for his country and was mostly stationed in Naples. His army life was full of great adventures like missions to Corfu and Navarino. He also witnessed the fall of Tunis and La Goulette.
In 1575, with the permission of Duke of Sessa, Cervantes sailed on the galley Sol from Naples to Barcelona but in the midway Sol was attacked by the army of Amaut Mami, an Albanian traitor. Many passengers were taken as captives to Algiers, including Cervantes. He was a slave there for five years and in between made at least 4 attempts to escape. His family paid money to get him free and he returned to Madrid to his family in 1580.
In 1585, he released ‘La Galatea’, his first major literary work. It was a pastoral romance and failed to get much attention. Cervantes kept promising his audience that he will write sequel to it but he never did. He did not have a good source of income and therefore, he tried his hands at theater as at the time it was considered as an important form of entertainment. But in reality, he did not get much money and recognition out of it.
During this time, he worked as a commissary for the Spanish Armada. The job required him to collect grain supplies from the rural communities. It was during the course of this job that Cervantes ended up in jail twice on the grounds of mismanagement. This is considered to be the time when he started writing some of his most memorable works.
He remained extremely poor and struggled with money until he published ‘Don Quixote’ in 1605. It was his literary work that he first perceived when he was in prison and his only aim behind writing it was to give his readers a realistic version of life and express his view point in clear language so that everyone can relate to it. ‘Don Quixote’ did not bring him a lot of money but he got a considerable amount of attention with it.
‘Don Quixote’ is a novella that presents the story of an elderly man who seeks out for adventures because he is mesmerized by the age-old stories of the courageous knights. The novel did not earn Cervantes royalty because in those times authors did not receive any royalties for their books but ‘Don Quixote’ became world’s first bestseller.
In 1613, he wrote a compilation of stories called ‘Exemplary Novels’. Next year he published ‘Viaje del Parnaso’ and in 1615, ‘Eight Comedies and Eight Ne Interludes’ were published. After the publication of these novels, Cervantes worked on his last novel called ‘ Los Trabajos de Persiles y Sigismunda’ until his death and got published in 1617. The novel was on the subject of adventurous travels.
Continue Reading Below 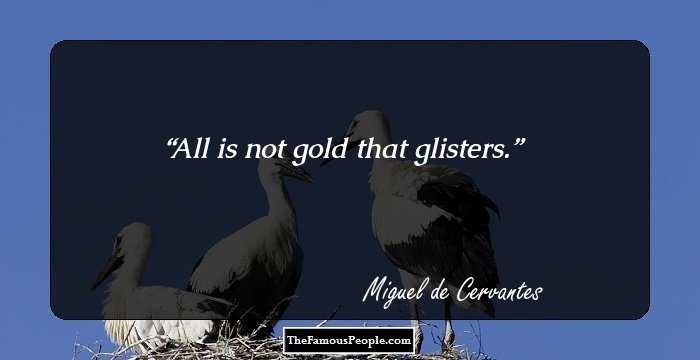 Personal Life & Legacy
In 1584, Cervantes married Catalina de Salazar y Palacios who was a daughter of Fernando de Salazar y Vozmediano and Catalina de Palacios. She was much younger to Cervantes and they remained married until his death. They did not have any children but Cervantes had a daughter from his earlier relationship with Isabel de Saavedra. She was named after her mother.
In 1616, Cervantes died in Madrid. According to his wish in his will, he was buried in a nearby convent to his house. The convent belonged to Trinitarian nuns. His daughter, Isabel de Saavedra, was also known to be a member of this convent. Later, the nuns moved to another convent and it is unknown whether they took Cervantes’ remains with them or not.
Trivia
While Cervantes was serving in the army, he got brutally wounded in the chest and his left arm became useless. But this did not stop him from continuing serving in the army.
His experience of getting kidnapped and being held captive for five years in Algiers gave him idea and material for his world famous ‘Don Quixote’ and two other plays: ‘El Trato de Argel’ and ‘Los Banos de Argel’. Both of these plays were set in Algiers.
‘Don Quixote’ became such a famous novel of its time that an unknown writer, impersonating as ‘Alonso Fernandez de Avellaneda’ published a sequel to the book. But Cervantes came out with his own continuation of ‘Don Quixote’ in 1615, which was not as famous as ‘Don Quixote’.
It is said that Cervantes died just a day before Shakespeare. Cervantes died on the 22 April 1616 and Shakespeare died on 23 April 1616. To honor both the writers UNESCO made 23 April as the International Day of the Book.
‘Don Quixote’s’ story has been retold in the musical called ‘The Man of La Mancha’ and through Pablo Picasso’s art work.
‘Don Quixote’ is considered as the first classic modern romantic and satirical novel. It has been called one of the ‘Great Books of the Western World’ by Encyclopedia Britannica.
It is said that Shakespeare was perhaps familiar with Cervantes through his great work ‘Don Quixote’ but it is highly unlikely that Cervantes ever knew about Shakespeare.
His contribution to the Spanish language is so big that sometimes the language itself is called ‘la lengua de Cervantes’, which means the language of Cervantes. 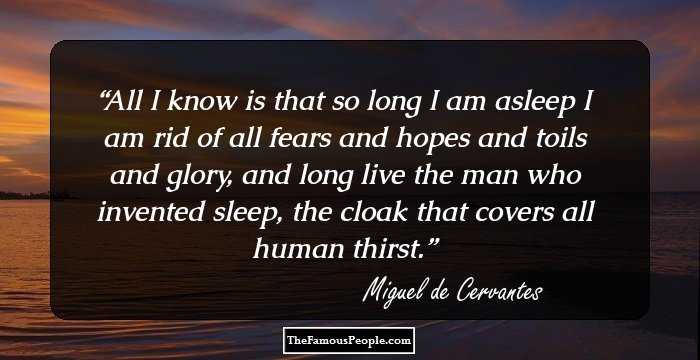 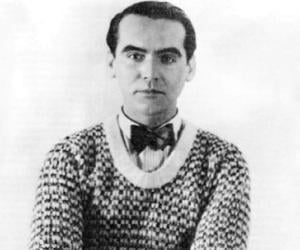