(American Poet, Critic & Satirist Who Was Known for Her Wit, Wisecracks, and Eye for 20th-Century Urban Foibles)

Dorothy Parker was an American poet, writer, critic, and satirist. She was born in West End, New Jersey. Known for her biting wit, she is considered a legendary figure in English literature. She worked for publications like ‘Vanity Fair’ and ‘The New Yorker.’ Also known for her short stories, she had won the O Henry Award for her story ‘Big Blonde’, which was a compassionate account of an aging party girl. She had spent a considerable time in Hollywood, California. She wrote screenplays for several films and had earned two Oscar nominations for the movies ‘A Star Is Born’ and ‘Smash-Up, the Story of a Woman’. However, when she became associated with the Communist Party, she was blacklisted from Hollywood. Despite being cut off from Hollywood, she was still regarded as one of the finest writers and poets of her time. She published several books throughout her career, including ‘Laments for the Living’, ‘After such Pleasures’, ‘Sunset Gun’ and ‘Death and Taxes’. Patti Smith
DID WE MISS SOMEONE?
CLICK HERE AND TELL US
WE'LL MAKE SURE
THEY'RE HERE A.S.A.P
Quick Facts

American Celebrities
American Women
Short Celebrities
Short Female Celebrities
Leo Poets
Childhood & Early Life
Dorothy Parker was born as Dorothy Rothschild on August 22, 1893, in Long Branch, New Jersey. Her parents were Jacob Henry and Eliza Annie Rothschild. Her father remarried Eleanor Frances Lewis in 1900.
Parker disliked her father and her stepmother a lot, and stated that she was abused physically. However, according to her biographer Marion Meade, this was false and she grew up in an affectionate and supportive family. She did her schooling from Miss Dana’s School. Some accounts claim that she never graduated from high school. 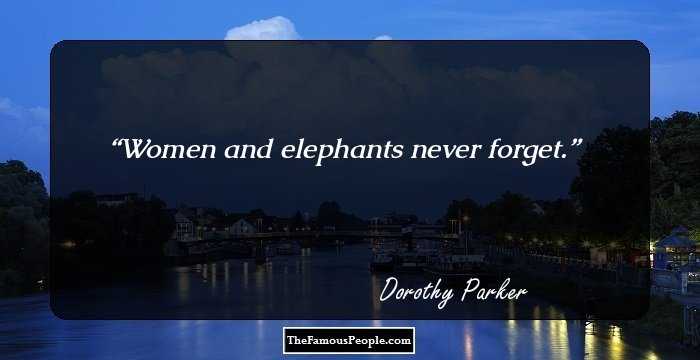 Quotes: Never, Women
Continue Reading Below
Career
Dorothy Parker sold her first poem in 1914 to ‘Vanity Fair,’ and a few months later, she was hired as an editorial assistant for ‘Vogue.’ After working for two years at ‘Vogue,’ she moved to ‘Vanity Fair,’ where she worked as a staff writer.
She wrote theater criticism and became known for her wit. However, her criticisms started offending powerful producers. This led to her being dismissed. Her colleagues Robert Benchley and Robert E. Sherwood also resigned in protest.
When ‘The New Yorker’ was founded by Harold Ross in 1925, Parker and Benchley were part of a board of editors which was established by Ross to allay the concerns of his investors. Parker started contributing humorous poems, many of which highlighted her unsuccessful romantic affairs.
Over the next few years, she published collections of poems such as ‘Enough Rope’, ‘Sunset Gun’ and ‘Death and Taxes’, as well as collections of short stories like ‘Laments for the Living’, ‘After Such Pleasures’, and ‘Collected Stories’.
Her first work in cinema was as a screenwriter for the 1936 drama film ‘Suzy’. The film was directed by George Fitzmaurice. Parker’s husband Alan Campbell was a co-writer as well.
In 1937, she was one of the screenwriters for the romantic drama film ‘A Star Is Born’, which was directed by William A. Wellman. The film was a commercial and critical success. Parker was nominated in the ‘Best Screenplay’ category at the Academy Awards.
Her next work as a writer was in the film ‘Sweethearts’ in 1938. The film was a commercial success, earning around twice its budget. She then wrote the comedy murder-mystery film ‘Trade Winds’ which was also a commercial success.
In 1941, she was the screenwriter for ‘Week-End for Three’, which was directed by Irving Reis. The film was a commercial failure. The next year, she wrote the screenplay for the film ‘Saboteur’, a spy thriller directed by renowned filmmaker Alfred Hitchcock. The film was a commercial success.
Parker earned her second Oscar nomination for the film ‘Smash-Up, The Story of a Woman’, which was directed by Stuart Heisler.
Continue Reading Below
In 1949, she wrote the screenplay for the drama film ‘The Fan’. Her last published work was the 1953 play ‘Ladies of the Corridor’. 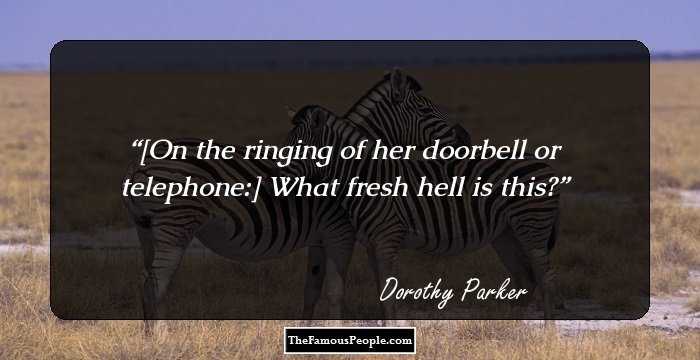 Major Works
’A Star Is Born’, a 1937 romantic drama film, is among the best works of Dorothy Parker’s career. The film was directed by William A. Wellman and produced by David O Selznick. It starred actors like Janet Gaynor and Fredric March. The film was a commercial success, earning $2 million on a budget of $1.2 million. It was also nominated for seven Oscars, out of which it won one.
She wrote the screenplay for the spy thriller film ‘Saboteur’. It was directed by the renowned filmmaker Alfred Hitchcock and produced by Frank Lloyd and Jack H. Skirball. The film had actors like Robert Cummings, Priscilla Lane and Otto Kruger. It was a success at the box office, earning $1.25 million on a budget of $780,000.
Family & Personal Life
Dorothy Parker was first married to Edwin Pond Parker II from 1917 to 1928.
She married Alan Campbell in 1934. Their marriage was full of conflicts, mostly due to her alcohol abuse and Campbell’s affair with a woman from Europe. Though they divorced in 1947, they remarried three years later.
Though she continued writing over the years, it became erratic with time due to her alcohol abuse. She worked with Campbell on several projects which were never completed as Campbell passed away of a drug overdose in 1963.
Parker passed away in 1967, due to a heart attack. She was 73. In her will, Parker bequeathed her estate to Martin Luther King Jr. 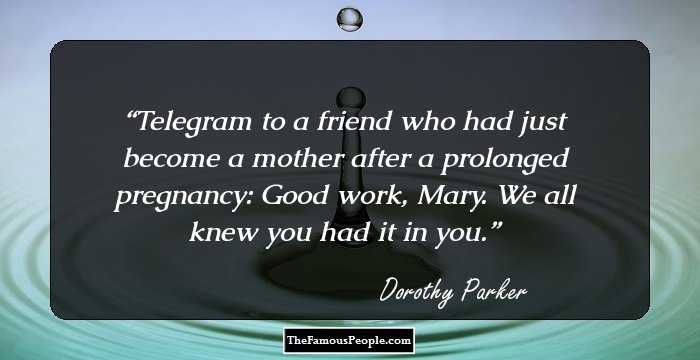 Quotes By Dorothy Parker | Quote Of The Day | Top 100 Quotes

See the events in life of Dorothy Parker in Chronological Order