Che Guevara was a legendary political activist, who dedicated his life to bring about the downfall of imperialism and the establishment of socialism. It is through his relentless work that he became the countercultural symbol of rebellion and revolution. Throughout his life, Guevara held numerous profiles, that of a doctor, author, guerrilla leader, diplomat, and military theorist. From an early age, Guevara was disturbed by the disdainful living conditions of the poor, and the hardships faced by them. It was his early expeditions that left a deep impact on him and propelled the emotions of anger and resentment, making him a rebel. He is known to have played a significant role in the ‘Cuban Revolution’ along with Fidel Castro, and was responsible for the victory against the Batista regime. Post ‘Cuban Revolution,’ he shaped the economy of Cuba by coming up with progressive plans. He was also responsible for the magnanimous increase in the literacy rate of Cuba from 60% to 96%. It was his confidence of creating the consciousness of ‘new man,’ driven by morals rather than material incentives that made him a revered figure in history. For the same, he was listed in ‘TIME’ magazine’s ‘100 most influential people of the 20th century.’ Fidel Castro
DID WE MISS SOMEONE?
CLICK HERE AND TELL US
WE'LL MAKE SURE
THEY'RE HERE A.S.A.P
Quick Facts

Cuban Celebrities
Revolutionaries
Military Leaders
Political Leaders
Cuban Men
Childhood & Early Life
Che was born Ernesto Guevara on June 14, 1928, in Rosario, Santa Fe province, Argentina, to Celia de la Serna y Llosa and Ernesto Guevara Lynch. He was the eldest of five children, born to the couple.
At a young age, he was introduced to many political perspectives, primarily that of the leftists. This left a deep impact on the mind of this budding revolutionary.
He developed an affinity for reading, and was known to be a voracious reader. During his early days, he read the works of various revolutionaries and political leaders of the world, including Karl Marx, William Faulkner, Andre Gide, Emilio Salgari, Jawaharlal Nehru, and Albert Camus among others.
As a youngster, he excelled in athletics and various sport activities. After receiving his preliminary education, he enrolled at the ‘University of Buenos Aires’ to study medicine.
It was while attending college that he embarked on two long journeys; a 4500km solo bicycle journey through the rural provinces of Northern Argentina in 1950, and a nine-month, 8,000-kilometer continental motorcycle trek through most of South America with his friend Alberto Granado in 1951.
These two journeys played an instrumental role in changing his views of himself and the then prevailing economic conditions. He was baffled by the ruthless exploitation of the poor and amazed at the friendliness prevailing amongst desperate people.
The notes taken during the two trips evolved to form a book titled ‘The Motorcycle Diaries.’ The book became a ‘New York Times’ bestseller. 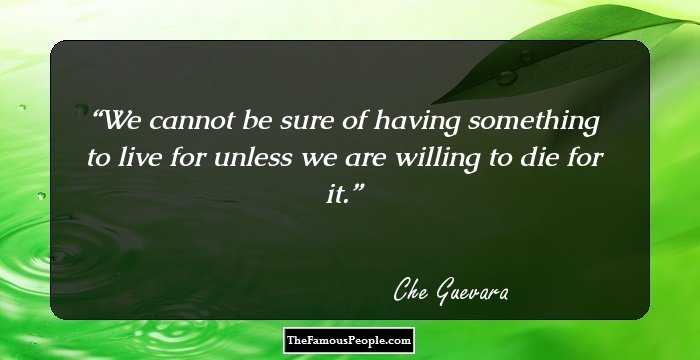 Quotes: Life, Death
Continue Reading Below
Later Life
Upon receiving a degree in medicine in 1953, he embarked on another journey, which further strengthened his views against capitalism and the need to save the world from it. He became politically active, first in Argentina and later in Bolivia and Guatemala.
To earn his living, he started working in the ‘General Hospital’ in Mexico City in 1954. Additionally, he gave lectures on medicine at the ‘National Autonomous University of Mexico.’ He also worked as a news photographer in a news agency.
Deeply troubled by the poverty and the exploitation of the poor, he resolved to fight for a better world. It was in 1955 that he was introduced to Cuban revolutionary leader, Fidel Castro. The two joined hands to work against imperialism.
He helped Castro in his effort to overthrow the Batista government in Cuba. For the same, he attained military training and learned the hit and run tactics of guerrilla warfare.
In 1956, the troops loyal to Castro, initiated the ‘26th of July Movement,’ during which they aimed at setting up a base in the Sierra Maestra mountains. However, attacked by the government troop, only 22 of the 82 members reached to the top.
In the next couple of months, they raided army camps, building up their stock of weapons and ultimately gaining victory over the territory. Upon attaining control over the region, they redistributed land equally among all peasants. In return, they were helped by the peasants against the Batista forces.
The growing popularity of Castro led to an increase in the strength of his army, with peasants, students, and Catholic priests joining the army. Furious at the growing popularity of the Castro army, the Batista government publically executed people, which raised an outcry amongst the people against the government.
By 1958, Castro’s army, which mainly comprised of the poor and the deprived, had gained the backing of the influential middle-class, and was supported by lawyers, doctors, accountants, and social workers. Castro’s troop fought bravely against the government forces, inflicting the latter with one defeat after another.
In 1958, Guevara played a critical role in the ‘Battle of Las Mercedes,’ leading to the failure of the plan of the Batista government, which aimed at destructing the Castro forces.
Continue Reading Below
He then led fighters towards Havana for the final push. He also played a crucial role in taking over Santa Clara, which became the final decisive military victory of the revolution. On January 8, 1959, Fidel Castro took control of Havana.
Guevara took up the position of a commander at the ‘La Cabaña Fortress’ prison. Also, he was in charge of instituting revolutionary justice against those considered to be traitors, informants, and war criminals.
In June 1959, he went on a three-month tour to cover the ‘Bandung Pact’ countries and cities of Singapore and Hong Kong. Upon returning from the tour, he was made the minister of industries.
During his tenure as the minister, he confiscated land owned by US corporations and re-distributed the same. In addition to land reform, he stressed on the importance of literacy.
He indulged in setting up schools and educational institutes in rural areas. He emphasized on the importance of training educators, who in turn would teach the illiterates. He also made higher education accessible to all. During his rule, the literacy rate rose from 60% to 96%.
In addition to being the minister of industries, he was made finance minister and president of ‘National Bank.’ In his new profile, he worked towards eliminating social inequalities by nationalizing factories, banks, and businesses. He even aimed at providing housing, healthcare, and employment facilities for Cubans.
In 1961, he visited China and Soviet Union and was mainly responsible for the Soviet-Cuban relationship. He criticized the Soviet bureaucracy. After some time, he resigned from his governmental duties to resume his work as a revolutionary abroad.
In 1965, he left Cuba to set up guerrilla troops, first in Congo and later in Bolivia. The following year, he tried to convince the people of Bolivia to rebel against the government but met with little success. 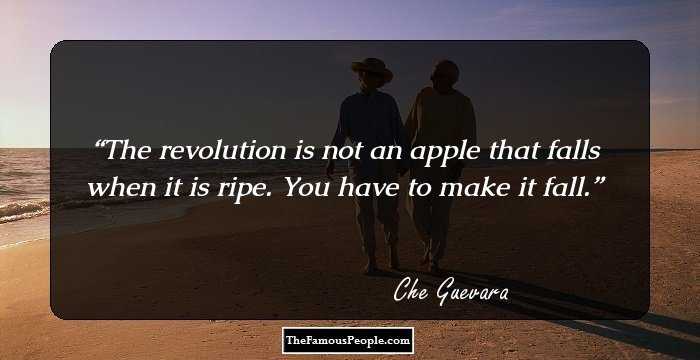 Quotes: You
Personal Life & Legacy
He tied the knot with Hilda Gadea in 1955. The couple was blessed with a child. However, the relationship did not last long, and the two got separated in 1959, after he informed Gadea about his relationship with Aleida March.
He then married Aleida March on June 2, 1959. The couple was blessed with four children.
His efforts to bring about an uprising in Bolivia not just failed, but cost him his life. He was captured by the government forces and taken to La Higuera on October 8, 1967. The following day, Bolivian President Rene Barrientos ordered him to be killed. The execution was carried out by Mario Teran, a sergeant in the Bolivian army.
It was only in 1997 that Guevara’s body was found near a Vallegrande airstrip. After receiving the confirmation report by forensic anthropologists, his mortal remains were laid to rest, with military honors, in a specially built mausoleum in the Cuban city of Santa Clara.
Trivia
He joined hands with Fidel Castro and played an important role in the ‘Cuban Revolution.’ For his revolutionary actions, he became an iconic cultural hero. 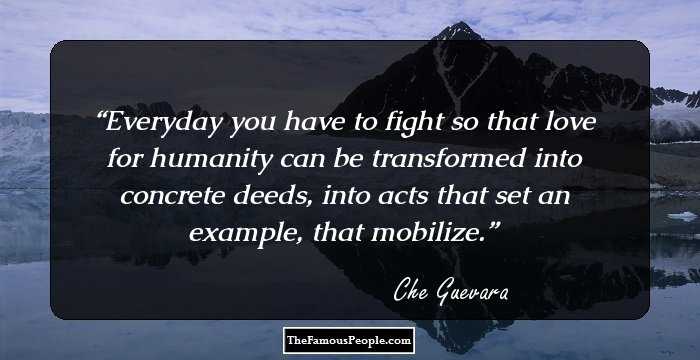 Quotes By Che Guevara | Quote Of The Day | Top 100 Quotes

See the events in life of Che Guevara in Chronological Order