(One of the Founding Fathers of the United States)

Benjamin Franklin was one of the Founding Fathers of the United States. A distinguished human being, he possessed an uncanny mind and sharp wit, which he used tirelessly for the betterment of his country and society at large. Franklin is credited with many inventions, including the swim fins, Franklin stove, catheter, library chair, step ladder, lightning rod, bifocal glasses, etc. However, he never patented any of them. He did not patent his inventions as he believed that they were not mere sources of moneymaking but tools to raise the living standards of people. His experiments with lightning gained him recognition throughout the world. Benjamin Franklin played a vital role in American history as he was a signer of both the Declaration of Independence as well as the Constitution, thus he is considered as one of the pivotal personalities who shaped America. His influence has been so great on the country that many scholars have gone as far as describing him as "the only President of the United States who was never President of the United States." Though, he was not able to continue his education beyond elementary level, there are hardly any renowned universities that did not felicitate him with an honorary degree for his exemplary work. American People
Political Leaders
Intellectuals & Academics
American Men
Male Leaders
Childhood & Early Life
Born on January 17, 1706, in Boston, Massachusetts Bay, British America, Benjamin Franklin was baptized at ‘Old South Meeting House.’ His father, Josiah Franklin, wanted him to become a clergyman but due to monetary constraints, he was able to attend school for only two years.
He was fond of reading, a habit which played a crucial role during his childhood. By the age of 12, under the guidance of his brother James, who was a printer, he began to learn tricks of the trade.
At the age of 17, he ran away from home to start his life afresh in Philadelphia. 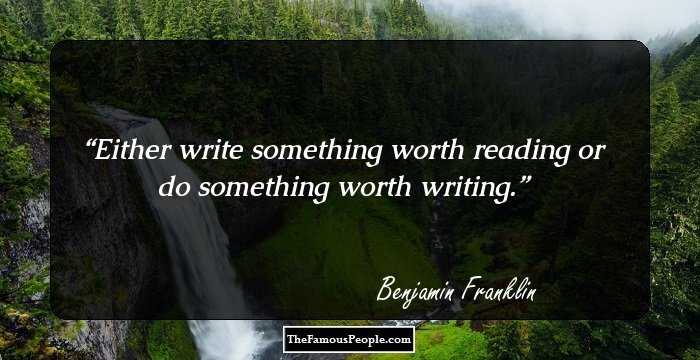 Continue Reading Below
Career
In Philadelphia, Franklin worked in several print shops but did not find much success, thus moved to London, where he worked as a typesetter.
In 1726, he returned to Philadelphia, and started working as a bookkeeper, shopkeeper, and clerk for a merchant named Thomas Denham.
At the age of 21, in 1727, he established a group named the ‘Junto,’ which included like-minded people who wanted to bring about a change in the society through creativity.
The group (Junto) loved reading, but due to the unavailability of books at the time, they began to collect books on various genres, and this led to the formation of the first subscription library in America.
In 1731, he wrote the charter of the ‘Library Company of Philadelphia,’ and thus came into existence the first American library.
He published a newspaper called ‘The Pennsylvania Gazette.’ He then began to publish ‘Poor Richard’s Almanack’ in 1733, a paper that featured cooking recipes, predictions, and weather reports.
He established the nation’s first volunteer firefighting organization, ‘Union Fire Company’ in 1736, which became one of his many remarkable contributions to the society.
He contributed immensely to the initial study of demographics and noted the phenomena of growing human population.
His 1751 work ‘Observations concerning the Increase of Mankind, Peopling of Countries, etc.’ proved to be inspirational for Thomas Malthus and Adam Smith.
Continue Reading Below
He also helped organize the ‘American Philosophical Society’ in 1743; the ‘Pennsylvania Hospital’ in 1751; and the ‘Philadelphia Contribution for Insurance against Loss by Fire’ in 1752. These organizations still exist today.
Franklin received the ‘Copley Medal’ in 1753 from the ‘Royal society of London.’ In 1756, he was elected as a ‘Fellow of the Society.’
His kite experiments proved that lightning is electricity, and led to the invention of the lightning rod.
As a politician, he fought for the rights of his country, working actively for uniting the colonies and for independence.
He assisted in drafting the ‘Declaration of Independence’ in 1776. The same year, he was appointed as the commissioner of the United States to France, a role he essayed with great finesse and success.
He was made the president of the ‘Executive Council of Pennsylvania’ in 1785. Franklin was selected as a delegate to the ‘Philadelphia Convention’ in 1787. 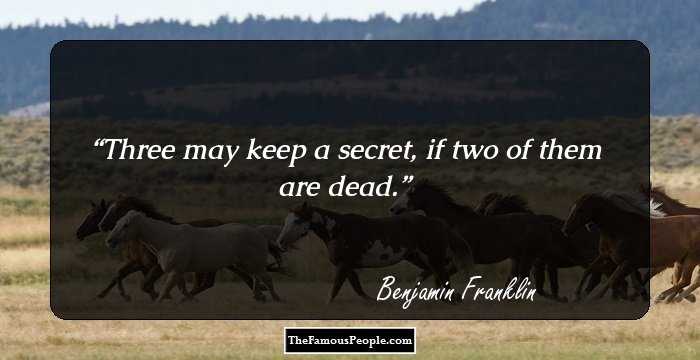 Major Works
One of his earliest successful literary endeavors was ‘Poor Richard’s Almanack’ (1732 to 1758), which was a pamphlet that Franklin published under the pseudonym ‘Poor Richard.’
‘The Autobiography of Benjamin Franklin,’ which he wrote between 1771 and 1790 (published posthumously) is revered even today as a classic in the genre.
Continue Reading Below
He published several path-breaking works, which included ‘The Way to Wealth’ (1758), an ingenious guide for managing personal finances and developing entrepreneurial skills.
Awards & Achievements
He was honored with the Royal Society’s ‘Copley Medal’ (1753) for his exemplary work in the field of electricity. In the same year, he received honorary degrees from ‘Harvard’ as well as ‘Yale University’ for his extraordinary contribution to society through his scientific innovations. 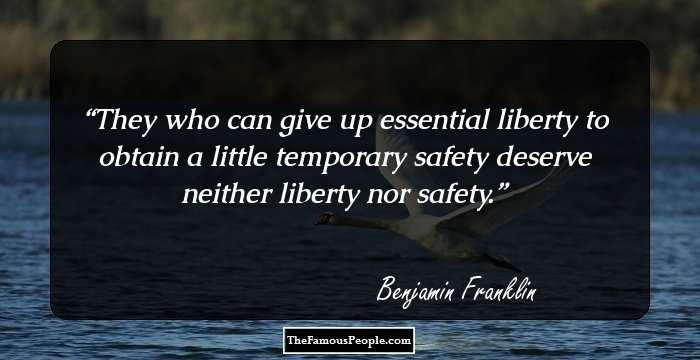 Personal Life & Legacy
Franklin married his childhood friend Deborah Reed in 1730, and they had two children. The couple also raised William, Franklin’s illegitimate son, as part of the family.
His love for humanity led to his involvement in community affairs and politics. Also, fighting for an improvement in people’s life became his motto.
He passed away due to health issues on April 17, 1790, in Philadelphia, at the age of 84. His mortal remains were buried at ‘Christ Church Burial Ground.’
Franklin is no less than George Washington to the American public. Therefore, his legacy is ubiquitous around the nation.
In Franklin’s honor, the ‘Benjamin Franklin Award’ is given to recognize excellence in independent publishing.
His images can be seen adorning various dollar bills and postage stamps.
Continue Reading Below
Many places in the United States of America, such as North Franklin Township, Nebraska, and North Franklin are named after Benjamin Franklin.
There is a bridge over the Delaware River in the U.S. named after Franklin. Known as ‘Benjamin Franklin Bridge,’ it connects Philadelphia and Camden.
Trivia
He was fond of chess and also dabbled in music. He could play several musical instruments. He was also a gifted author and wrote several essays, satires, etc.
He invented many ingenious apparatuses, including the lightning rod, bifocals, glass harmonica, and the Franklin Stove.
From middle age onwards, he was plagued by obesity, which led to the development of various other health issues, such as gout.
His funeral ceremony was attended by approximately 20,000 people.
Electric charge (cgs unit) shares his namesake and is known as ‘Fr.’
His ‘Maritime Observations,’ published in 1786, included rough ideas about sea anchors, catamaran hulls, watertight compartments, and even the design of a soup bowl intended to stay balanced in stormy weather.
He is believed to be the first person to have used the decision-making technique of drawing a pro and con list, an example of which was seen in a letter he wrote to Joseph Priestley in 1772.
Recommended Lists:
Leaders #50
Inventors & Discoverers #24

Quotes By Benjamin Franklin | Quote Of The Day | Top 100 Quotes

See the events in life of Benjamin Franklin in Chronological Order