Ernest Walton was an Irish physicist who shared the 1951 Nobel Prize in Physics with John Crockcroft for their work on splitting the atomic nucleus. He was first person in the history to artificially split the atom and was instrumental in the development of nuclear power. Born to a Methodist minister father and his childhood saw him moving from town to town on a regular basis. He studied as a boarder at the Methodist Belfast College and excelled in science and mathematics. He won scholarships to Trinity College, Dublin for studying mathematics and science. He completed his bachelor’s and master’s degree from Trinity and thereafter got a research fellowship to work as a researcher at Trinity College, Cambridge. At Cambridge University, he worked at the famous Cavendish Laboratory under Lord Rutherford and before long he started working in collaboration with John Cockcroft on atom splitting that opened up a new chapter in modern nuclear physics. It also led to the confirmation of the theories pertaining to the atomic structure that were propounded by other scientists. Subsequently he started working at Trinity College, Dublin as a fellow and spent the rest of his career at the college. He was made the Erasmus Smith Professor of Natural and Experimental Philosophy at Trinity College. 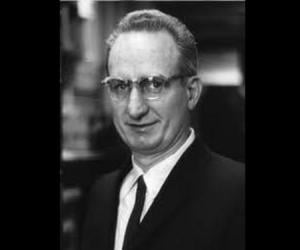 Irish Celebrities
Trinity College Dublin
Trinity College, Cambridge
Libra Scientists
Male Physicists
Childhood & Early Life
Ernest Walton was born 6 October 1903, in Dungarvan, Ireland to Reverend John Walton and Anna Sinton. His father was a Methodist minister and his occupation made him move from one place to another, which meant that the rest of the family did the same. His mother passed away in 1906
Throughout his childhood he stayed in several places like Rathleake and County Monaghan among others at different stages. Initially he attended schools in Down and Tyrone before studying at Wesley College Dublin. In 1915, he joined the Methodist College Belfast as a boarder.
In 1922, he won a scholarship to study at Trinity College in Dublin. At Trinity College, he studied the courses in both mathematics honours and honours in experimental science and four years after joining the college he graduated in both. In 1927, he completed his master’s from Trinity College.
Continue Reading Below
You May Like

Famous Beautiful Women With Green Eyes
Career
In 1927, Ernest Walton was awarded a research fellowship by the Royal Commissioners for the Exhibition of 1851 and he went to Cambridge University to work in the Cavendish Laboratory under Lord Rutherford. The Department of Scientific and Industrial Research gave him a research award three years after he joined Cambridge and a year later the university awarded him his Ph.D.
He collaborated with fellow research scholar John Cockcroft in the early part of the 1930s to create an apparatus that was meant for bombarding lithium atoms with protons in order to split the nuclei inside them and the series of experiments that the two scientists conducted confirmed the theories on atomic structure that were propounded by scientists like Rutherford. It came to be known as the Cockcroft-Walton generator.
After working at the University of Cambridge for five years, he became the Clerk Maxwell Scholar at the university in 1932 and for the next two years he continued his research in the same capacity. During his time at Cambridge, he worked with some of the finest minds in science at the Cavendish Laboratory, which had four Nobel Laureates as the part of the staff.
He left the University of Cambridge in 1934 in order to join the Trinity College, Dublin, as a Fellow in the physics department. In 1946 he was appointed as the Erasmus Smith Professor of Natural and Experimental Philosophy and occupied this position till his retirement in 1974
Other than being one of the leading researchers of his time, he was also known for being a very good teacher who could break down complex theories so that it could be easily understood by students. His later career research was focussed on radiocarbon dating, hydrodynamics, microwaves, phosphorescent effect in glasses and secondary-electron emissions from surfaces under positive-ion bombardment.
In 1952, he became chairman of the School of Cosmic Physics at the Dublin Institute for Advanced Studies and in 1960 he was elected Senior Fellow of Trinity College.
Major Works
His collaboration with Cockcroft that helped in producing the Cockcroft-Walton generator that helped in confirming the atomic structure and also showed how bombardment can help split the nucleus of an atom is his most important work. It laid in starting a new era in the field of nuclear physics and he also shared the Nobel Prize in Physics for his research.
Awards & Achievements
In 1938, Walton and Cockcroft shared the Hughes Medal awarded by the Royal Society of London “for their discovery that nuclei could be disintegrated by artificially produced bombarding particles.”
In 1951, he shared the Nobel Prize in Physics with John Cockcroft for his work on ‘atom smashing’.
Personal Life & Legacy
In 1934, Ernest Walton got married to Freda Wilson, who had also been a student of the Methodist College. The couple had four children; two sons and two daughters.
Ernest Walton died on 25 June 1995, at the age of 91, in Belfast, Ireland.
You May Like

See the events in life of Ernest Walton in Chronological Order