Sherman Joseph Alexie, Jr. is an award winning author whose works primarily fall under the genre of Native American literature. His works are characterized by themes relating to the difficulties faced by Native American people: alcoholism, violence, poverty and despair. Born and raised on the Spokane Indian Reserve, Washington, Alexie had a very troublesome childhood. He was born with a serious health condition that required complicated surgery when he was just an infant. Doctors had warned that the boy might not live and even if he survived he might face mental disabilities later in life. Alexie not only survived, but also grew up to become a highly acclaimed novelist and poet. His childhood struggles were not limited to health problems; the son of an alcoholic, he faced domestic troubles as well. Life on the Spokane Reservation presented its own challenges and he realized that he needed to get out of there to achieve something in life. A brilliant student in spite of his health problems, he earned a scholarship to attend the Gonzaga University. Initially he wanted to become a doctor but anatomy classes made him squeamish and he shifted to creative writing. He entered the literary world first by writing poetry before moving on to write short stories and novels.
Continue Reading Below American People
Poets
Directors
American Men
Tall Celebrities
Childhood & Early Life
He was born to Sherman Joseph Alexie, Sr. and Lillian Agnes as one of their six children on the Spokane Indian Reservation. He is of mixed ancestry.
He was born with the condition hydrocephalus that required him to have brain surgery at the tender age of six months. His parents were told that their son might not survive and even if he did, he may suffer serious mental disabilities. Miraculously he survived.
His alcoholic father was largely absent during his childhood and his mother worked at several jobs to support her children.
He suffered from frequent seizures during his childhood and had to take a lot of medicines to control them.
After attending the reservation school for some years he shifted to Rearden High School. He excelled in not just academics, but also in sports and extra-curricular activities.
He earned a scholarship to attend Gonzaga University for his pre-med program in 1985. However anatomy classes made him uncomfortable and he had to ditch his dreams of becoming a doctor. He dropped out in 1987.
He enrolled at Washington State University to study creative writing. He attended a course taught by the renowned poet Alex Kuo who took him as his prot�g�. Studying poetry under the great scholar inspired him to start writing his own.
He received the Washington State Arts Commission Poetry Fellowship and the National Endowment for the Arts Poetry Fellowship. 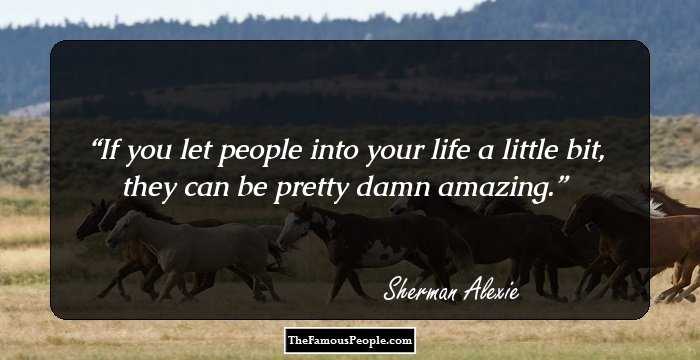 The Best Black Actresses Of All Time
Career
His first collection of poetry, ‘The Business of Fancydancing: Stories and Poems’ was published in 1992. ‘I would Steal Horses’ was released the same year.
His works primarily cover themes like poverty, racism, alcoholism, etc. which were common problems faced by the Native Americans. He would express his serious thoughts in a humorous and light-hearted manner.
Two other collections of poetry were published in 1993: ‘Old Shirts and New Skins’ and ‘First Indian on the Moon’.
His first work of prose, ‘The Lone Ranger and Tonto Fistfight in Heaven’ was out in 1993. It was a collection of 22 interconnected short stories with recurring characters.
In 1995 his first full length novel, ‘Reservation Blues’ was published. He further developed the characters he had introduced in his short story collection in this novel.
In 1996 he wrote a novel ‘Indian Killer’ that deals with a serial murderer who kills and scalps white men in Seattle which in turn triggers racial violence and hatred among the city’s inhabitants.
He wrote the screenplay for the independent movie ‘Smoke Signals’ (1998) which was directed and co-produced by Chris Eyre. The film won several awards and accolades.
He wrote and directed a film ‘The Business of Fancydancing’ (2002) which explored the relations between two Spokane men who grew up together and the conflicts that develop between them later on.
‘The Absolutely True Diary of a Part Time Indian’ (2007) is a young adult novel that is written in a first-person narrative. The novel was semi-autobiographical in nature and was illustrated by Ellen Forney.
Continue Reading Below
Another novel, ‘Flight’ was also published in 2007. It focused on the story of a Native American teenager called Zits who as a foster child has been through many difficulties and ultimately takes up the path of violence.
A collection of poems and short stories, ‘War Dances’ was released by him in 2010. 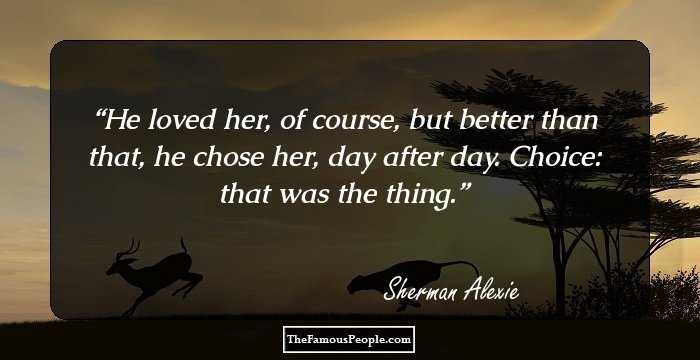 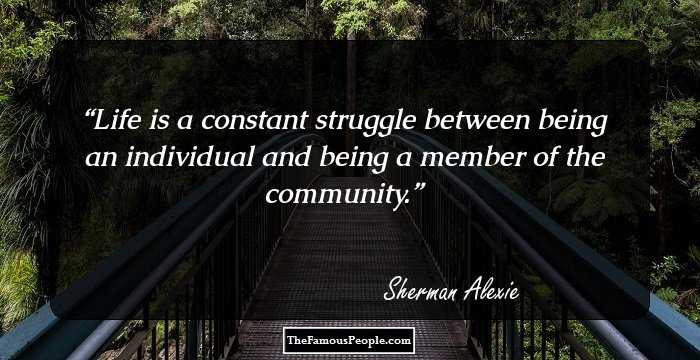 Quotes: Life
Personal Life & Legacy
He is married to Diane Tomhave and has two sons.
He is a founding Board Member of Longhouse Media, a non-profit organization that teaches filmmaking skills to Native American youths.
Trivia
As a child he earned the nickname ‘The Globe’ because of his large head.
Recommended Lists:
Film & Theater Personalities #7704
You May Like

Quotes By Sherman Alexie | Quote Of The Day | Top 100 Quotes

See the events in life of Sherman Alexie in Chronological Order