Ella Wheeler Wilcox was a prominent American author and poet, best known for her work ‘Poems of Passion’. Having her works published in several books, magazines, and periodicals, she can be considered one of the most popular poets of her time. Though not highly critically acclaimed, her works were widely accepted and loved by the public. Her works popularized the ideals of a philosophical movement know as New Thought, which promotes ideas of an Infinite Intelligence, of all people being divine spiritual beings, and ways to live a healthy spiritual life. Her poems thus reflected her belief that eventually good would triumph over evil. They also used to be of an optimistic nature and encouraged a positive approach to life. Her poetry was written in plain, rhyming verse, and was highly popular among the masses. Some of her popular works were ‘A Woman of the World’ published in 1904, ‘Poems of Peace’, published in 1906, and ‘Poems of Experience’ published in 1910. She wrote her autobiography as well, which was titled ‘The Worlds and I’, and was published just a year before her death. Alice Walker
Poets #436
Writers #2912
DID WE MISS SOMEONE?
CLICK HERE AND TELL US
WE'LL MAKE SURE
THEY'RE HERE A.S.A.P
Quick Facts

American Celebrities
American Women
Women Poets
Scorpio Poets
Women Writers
Childhood & Early Life
Ella Wheeler was born on 5 November 1850 in Johnstown in Wisconsin. She was the youngest of four siblings.
Her family had to soon move to Madison, which was the capital city of Wisconsin. In the meantime, Ella had started writing poetry though she was very young. Her works started appearing in papers and journals while she was still a teenager.
By the time she completed her high school, she had become a very well-known poet all over the state. She attended the University of Wisconsin in 1867-68 but she gave up her studies to devote herself to writing. 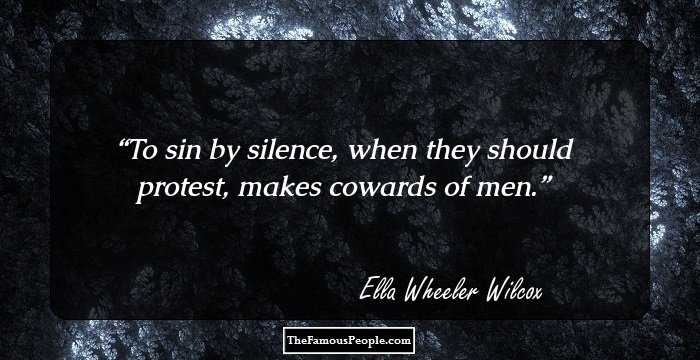 Who Is The Most Popular BTS Member?
Career
Ella Wheeler’s first book ‘Drops of Water’, a collection of temperance verses, was published in 1872, which was followed by ‘Shells’, a collection of poems of mostly religious and moral nature, in 1873.
She published ‘Maurine’ in 1876. Her next book which was a collection of love poems was initially rejected by the publisher. However, it was published later in 1883, by another publisher, and received much success. The book which was titled ‘Poems of Passion’ sold 60,000 copies in just two years. It also firmly established Wheeler’s reputation as a poet and author.
In 1883, ’Solitude’, one of her most famous poems, was published in ‘The New York Sun’ a politically conservative newspaper of that time. She was paid $5 for the poem. The poem was also included in her famous poem collection ‘Poems of Passion.’
She received inspiration for the poem ‘Solitude’ when she was travelling to attend the Governor’s inaugural ball in Madison. She met a young crying woman on the way whom she tried to comfort for the rest of the journey. When she arrived at her destination, she felt extremely depressed and could hardly pay attention to the celebrations. When she looked at her own reflection in the mirror, she was reminded of the crying woman again. That’s when the opening lines of the poem were composed.
An ardent believer in the New Thought Movement, Ella Wheeler Wilcox made attempts to teach occult stuff to the world. She wrote a lot about topics like positive thinking, law of attraction, personal power, etc. to popularize the movement. Her booklet ‘What I Know about New Thought’ became quite popular as well, and had a distribution of 50,000 copies.
She also contributed to fiction. Some of her well-known works are ‘Mal Moulee’ and ‘A Woman of the World’, published in 1885 and 1904 respectively. She wrote two autobiographies as well. ‘The Story of a Literary Career’ was the first one which was published in 1905. The other one ‘The Worlds and I’ which was published 13 years later, became more popular than the former. 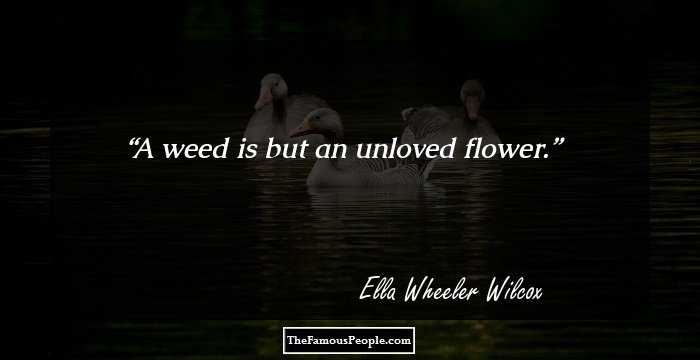 Major Works
'Poems of Passion', published in 1883, was a collection of some of Ella Wheeler Wilcox’s best poems. Though it was initially feared that the title of the book would cause controversy, the book was a great success, and embraced by thousands of readers. ’Maurine and Other Poems’ was another collection of some of her best poems, which were mainly about topics such as love and friendship
'New Thought Common Sense' was one of her books explaining and promoting New Thought philosophy. She wrote the book in a language of simplicity, so that it wouldn’t be difficult for the common man to understand it. The book, which was published in 1908, explores the spiritual aspects of Eastern religions like Hinduism and Buddhism.
The book was about God realization and how human beings can realize the divinity within themselves. She explained how human beings can build their personality, along with topics like marriage, women, parenthood, etc. She also discussed the difference between religion and spirituality, and how the later is superior to the former.
'The Power of Right Thought' was another one of her works on New Thought philosophy. Twenty-four selected essays of Wilcox are contained in this work. The essays mainly deal with topics like Faith, Hope, Courage and Self-Confidence.
In this book she also focused much on the importance of happiness, and why it is important to be happy and live in the present moment, forgetting the money one has lost, mistakes one has made, or injuries one has received. She also talked of the spirit and its limitless powers, and how one could work to realize it. She also explained the importance of patience and how it is extremely important for someone who wants to experience true transformation.
Personal Life & Legacy
Ella Wheeler married Robert Wilcox in 1884. He belonged to Meriden, Connecticut, and they lived there for some time before they moved to New York, and then later to Granite Bay, a place in Branford, Connecticut. They had several houses and cottages, which they used for literary and artistic gatherings. They had a son as well, who died shortly after birth. Ella’s husband also shared her views on New Thought and Spiritualism.
After over thirty years of marriage, Robert Wilcox died in 1916, which left Ella in a depressed state for a long time. They had promised each other that whoever died first would come and contact the other. However, since she got no message from him, it left her with grief, until Max Heindel, a renowned astrologer, mystic and occultist, explained to her in detail why she was not being contacted.
She was diagnosed with cancer in her later years which led to her death on October 30, 1919. 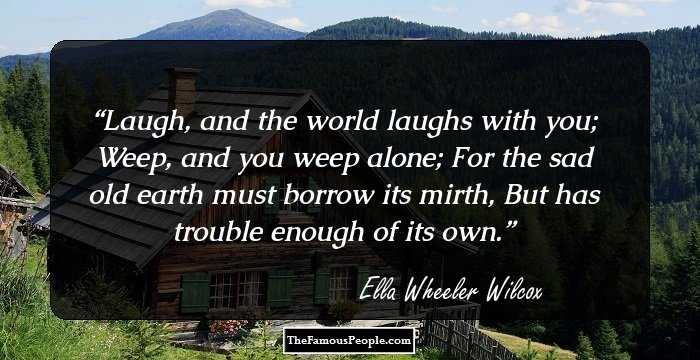