Advanced Search
Gary Sherman Snyder is a famous American poet, writer, educator, travel writer, translator and environmental activist. He was born and brought up in California - his family suffered during the Great Depression when he was very young. He studied in the Reed College where he developed interest in the poetry and got some of his poems published for the first time. Later he got himself enrolled at Indiana University but left it in the middle to pursue his passion for poetry in San Francisco. He worked as a timber scaler and looked out for fire over the mountains, logger, etc. After this, he went to the University of California to study Asian culture and languages. After graduation, he went to Japan for a year to study Zen under Miura Isshu. He eventually became his disciple and studied koan, ancient texts, Japanese language, etc. under him and lived the life of a monk for a while. On his experiences from the wide range of jobs, studies and travels, Snyder wrote many poetry books and essays. He was awarded the prestigious Pulitzer Prize for one of his books and is still working as an educator at the University of California. Charles Robert ...
DID WE MISS SOMEONE?
CLICK HERE AND TELL US
WE'LL MAKE SURE
THEY'RE HERE A.S.A.P
Quick Facts

American People
Environmental Activists
American Men
Reed College
Indiana University
Childhood & Early Life
Gary Snyder was born on 8 May 1930 in San Francisco, California, to Harold and Lois Hennessy Snyder. His family was greatly affected by the Great Depression and in order to make a living they moved to Washington.
Snyder was an avid reader from a very young age. When he was 7 years old, he met with an accident and was bedridden for four months and during that time he read rapaciously. He moved to Oregon at 17.
In 1942, Snyder’s parents got divorced and he started to live in Portland with his mother and sister. His mother was a reporter at The Oregonian. He went to the Lincoln High School and worked as a paper boy and camp counselor.
In 1947, he secured admission on a scholarship at the Reed College. Here, he made a number of author friends - Lew Welch, Philip Whalen, Carl Proujan, etc. During this time, he got his first set of poems published.
In 1948, he started working as a seaman for which he had to join the Marine Cooks and Stewards union to get that job. Working as a seaman helped Snyder to understand other cultures, an interest he developed since he was 10.
In 1951, Snyder graduated from the Reed College with a double degree in anthropology and literature. After college he took up a job at Warm Springs to work as a timber scaler. Thereafter he enrolled at the Indiana University.
He left the university after the first semester as he wanted to go back to San Francisco to become a poet. He worked as a fire lookout in Washington for a few months and went back to working for Warm Springs. 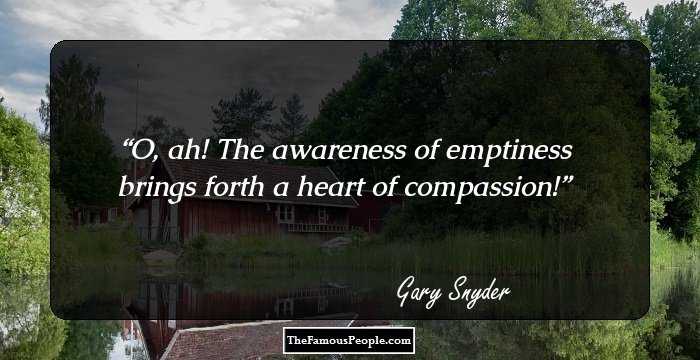 Quotes: Heart
Continue Reading Below
Career
In 1953, Snyder decided to get admission at the University of California, Berkeley, in order to study Asian languages and culture. He studied poetry and traditional culture here and spent rest of his time doing part-time work.
In 1955, he was offered a year old scholarship to get trained in Zen in Japan but he was denied a passport as he was an alleged ‘communist’. But after some changes in the policy he got to visit Japan.
In Japan, initially, he worked as an English tutor and personal attendant to Miura Isshu in Shokoku-ji, Kyoto. He started taking Japanese classes so that he can study koan. He eventually became Miura’s disciple and became a Buddhist in 1955.
In 1958, he came back to the Unites States and became a crewman in ‘Sappa Creek’ and went back to Japan and became first foreign disciple of Roshi and for the next 11 years he kept studying Zen.
From 1958-1969, he worked on translations with Sasaki and lived on the island of Suwanosejima with a bunch of other co-disciples like. He worked professionally in Japan while he was living the life of a monk.
Around this time he got his poetry published in ‘Myths & Texts’ and ‘Six Sections from Mountains and Rivers Without End’. His poetries portrayed the experiences that he had gained over the time while he was working as a scaler, logger, translator, etc.
sIn 1967, a collection of his poems ‘The Back Country’ was published which was more like a conclusion of the last 15 years of his life, his experiences of Japan and America and the indigenous cultures.
In 1969, ‘Regarding Wave’ got published which contained poems from Snyder that were more of emotional and sentimental nature. These poems were more lyrical and rhythmical than his earlier work.
From 1969-1999, many writings of Snyder got published - ‘Earth House Hold’, ‘The Old Ways’, ‘The Real Work’, ‘The Practice of the Wild’, ‘A Place in Space’, ‘The Gary Snyder Reader’, ‘He Who Hunted Birds in His Father’s Village: The Dimensions of a Haida Myth’.
Continue Reading Below
In 2000s, the new collection of his poetry got published as ‘Danger on the peaks’ and John J. Healy made a documentary oh Snyder’s life called ‘The Practice of the Wild’. The film was made to celebrate his life on the big screen.
His other works include: ‘Axe Handles’, ‘Left Out in the Rain’, ‘Passage Through India’, ‘The High Sierra of California’, ‘Back on Fire: Essays’, ‘Tamalpais Walking’, ‘’The Etiquette of Freedom’, ‘The Back Country’, ‘Turtle island’, etc. 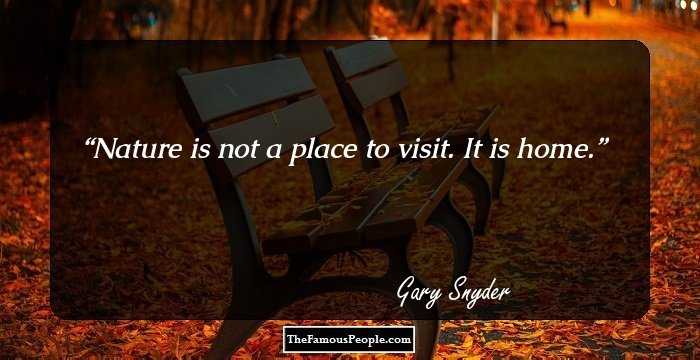 Quotes: Nature, Home
Awards & Achievements
In 1974, his book ‘Turtle Island’ won a Pulitzer Prize. The book was named after a native American name for the North American Continent and reflected his experiences with the native culture of America.
Personal Life & Legacy
In 1950, Snyder got married to Alison Gass but the two divorced after 7 months. He remained single for the next eight years of his life.
In 1958, while he was travelling back and forth from Japan he met with a poet Joanne Kyger and he got married to her in 1960 after his Zen teacher insisted that if they are to live together, they must get married.
In 1967, he married Masa Uehara, a woman he met in Osaka. They both moved to California after marriage and had two sons together - Kai and Gen. After 22 years, he separated with Masha Uehara and married Carole Lynn Koda. 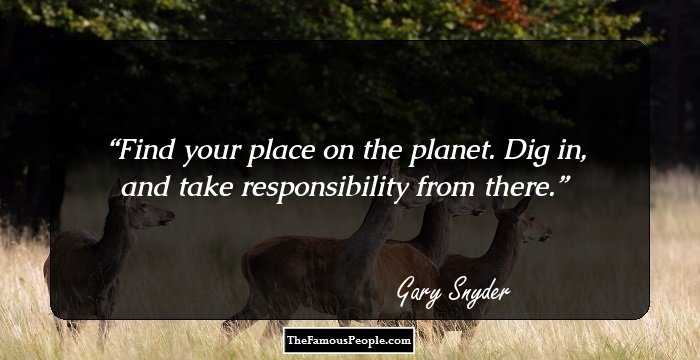 Trivia
He was awarded the Levinson Prize, the American Poetry Society Shelley Memorial Award, Bollingen Prize, the John Hay Award and Buddhism Transmission Award.
His Wife Carole is the writer of ‘Homegrown: Thirteen brothers and sisters, a century in America’.
He was called the ‘Thoreau of the Beat Generation’ by Lawrence Ferlinghetti.
Recommended Lists:
Activists #485

Quotes By Gary Snyder | Quote Of The Day | Top 100 Quotes

See the events in life of Gary Snyder in Chronological Order