Elizabeth Gwynne, famous as Elizabeth David, was a British cookery writer who changed the way British middle-class used to cook in their kitchens. It is said that she is the woman who introduced English to olive oil and garlic. Elizabeth was a woman of exceptional talent and a personality that defied conventions from a very young age. She belonged to a family of an influential politician and enjoyed the fruits of living in an upper-middle class society but as she grew up, she realized that the traditions of this society were irksome. She went on an expedition to Greece on a small sailing boat with her controversial lover. She lived in France, Italy, Greece and Egypt for considerable amount of her life and returned back to England. She found English food and culture utterly dismaying as compared to the richness of flavors and taste that she was now accustomed to. These flavors of food and life were missing from the grey and bland environment of England. This compelled her to write about Mediterranean food for ‘Harper’s Bazaar’ and from there on started to write her famous cookery books on food, flavor, herbs, kitchen equipments, places and culture of places like Italy, France, Turkey, Egypt, Greece, etc. She changed the face of British kitchens by introducing people to rich ingredients and alternative cooking techniques. Jamie Oliver
DID WE MISS SOMEONE?
CLICK HERE AND TELL US
WE'LL MAKE SURE
THEY'RE HERE A.S.A.P
Quick Facts

British Celebrities
Women Chefs
Briton Chefs
Women Food Experts
Briton Food Experts
Childhood & Early Life
Elizabeth David was born in Sussex, England to Rupert Sackville Gwynne and Hon. Stella Ridley. Her father was a Conservative MP for Eastbourne and a junior minister in Andrew Bonar Law’s government. She had three sisters.
Elizabeth was brought up in an upper-middle class environment. Due to the sad demise of her father when she was only 11 and failure to receive any affection from her mother, she was sent to a boarding school.
Soon Elizabeth inculcated a taste for art and painting, which is why she was sent to Paris by her mother and got enrolled at the Sorbonne. The moment she finished her course, she was sent to Munich to learn German.
Elizabeth came back to England and had to go through the conventional rituals of upper-middle class, which she stridently despised. To her mother’s disappointment she decided to pursue acting and joined the Oxford Repertory Company in 1933. 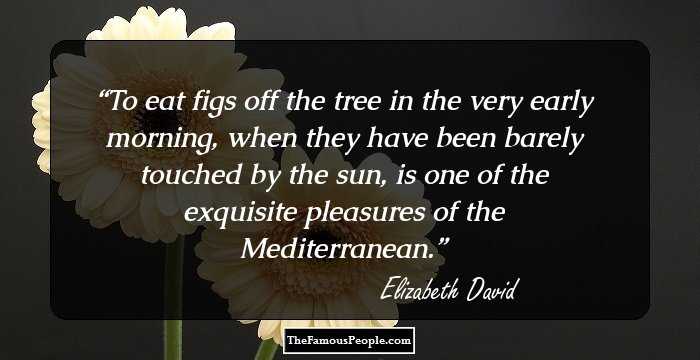 Continue Reading Below
Career
The life-changing escapades started in Elizabeth’s life when she met Charles Gibson-Cowan with whom she left on a boat to Greece in 1938. Before that she was working as a junior assistant at the fashion house of Worth, England.
Elizabeth along with her lover crossed the English Channel on their boat in 1939 and took a stopover in Marseille and quickly moved to Antibes. There she met writer Norman Douglas who inspired and introduced her to Mediterranean food.
The couple left Antibes in 1940 but the moment they reached Sicily, they were arrested for they were suspected to be spies. They remained in custody for 19 days and all of their possessions were confiscated.
Elizabeth and her partner reached Athens in the same year and decided to settle there. He worked as an English teacher in Syros and she started to learn how to cook. They left for Egypt in 1941.
As Elizabeth was fluent in French and German, she was hired in the naval cipher office, Alexandria. There she savored the flavor of Egyptian food. In 1942, she ran the Ministry of Information’s reference library in Cairo.
She got married to Lieutenant-Colonel Tony David in 1944 and move to India with him. Elizabeth did not enjoy her life as a wife of an officer and also could not adjust to the Indian weather. She went back to England.
Elizabeth found it very difficult to adjust with the flavorless food of England. In 1947, her husband returned back and they started their marital life in Chelsea. It was here that she first started to write articles on cookery.
In 1949, her cookery articles appeared in ‘Harper’s Bazaar’. While writing these articles, Elizabeth knew her aim well to compile these articles into a book in future, which is why she did not sell the copyright to her articles.
After getting rejected from many publishers on the context that her book ‘A Book of Mediterranean Food’ was a collection of unconnected recipes, it was published by John Lehmann, who was essentially a publisher of poetry, in 1950.
Continue Reading Below
Owing to the success of her book, Elizabeth published another book but this time debuted in the French cooking, ‘French Country Cooking’ in 1951. Unlike its predecessor, it drew less on her magazine articles. It had illustrations by John Minton.
She left for France immediately after the release of her second book and from there she went to Capri to meet Douglas. In 1954, she published ‘Italian Food’, a book based on her food and culture experiences in Italy.
In 1955, ‘Summer Cooking’ was released, and in this book she expressed her views on eating food in season. She wrote about dishes from Britain, Indian, Mauritius, Russia, Spain, France, etc. She was offered to write for ‘Vogue’.
Elizabeth travelled extensively in France and in 1960, she published the famous book, ‘French Provincial Cooking’, which referred to the dished from the interiors of France. She financed her French expeditions with the money she earned from ‘Vogue’.
She left ‘The Sunday Times’ and started writing for ‘The Spectator’ but her career suffered a big blow when she suffered from a cerebral hemorrhage in 1963 and she lost her sense of taste and confidence in the incident.
In 1965, Elizabeth opened a kitchen equipment shop ‘Elizabeth David Ltd’ in Pimlico. She opened the shop with four business partners with the aim of selling the kind of kitchen equipments that were not readily available in England.
Elizabeth wrote ‘Spices, Salt and Aromatics in the English Kitchen (1970)’, ‘English Bread and Yeast Cookery (1977)’, and ‘An Omelette and a Glass of Wine (1984)’.She continued to write articles for magazines and wrote more about places, chefs, etc. 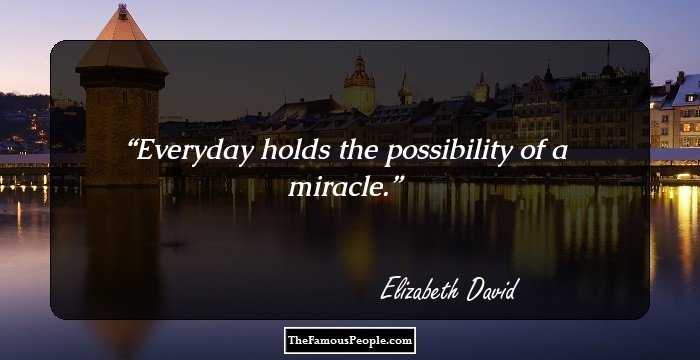 Quotes: Miracle
Major Works
The most important work of Elizabeth’s career is considered to be ‘French Provincial Cooking (1960)’, which elaborated on the dishes from interiors of France, culinary terms, herbs and French kitchen equipments. It made French cooking famous in England.
Continue Reading Below
Awards & Achievements
For ‘English Bread and Yeast Cookery (1977)’, Elizabeth won the ‘Glenfiddich Writer of the Year’ award. She also won the award of a ‘Chevalier de l'Ordre du M�rite Agricole’ and made a Fellow of the Royal Society of Literature. 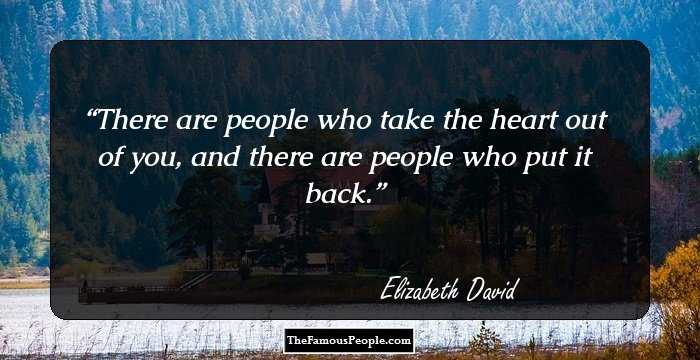 Quotes: You, Heart
Personal Life & Legacy
In the Oxford Repertory Company, Elizabeth met with an actor nine years her senior, Charles Gibson-Cowan and fell in love with him in 1933. He was married while having an affair with her but it did not bother her.
Both the lovers sailed to Greece in 1938 and travelled to many parts of Europe while on their way to Athens. When they finally reached in Greece, both of them amicably parted their ways and went about their lives.
While Elizabeth was working in Cairo, she had many affairs and did not plan to settle down. But as she was approaching her thirties, she accepted the marriage proposal by Lieutenant-Colonel Tony David and married him in 1944.
After getting divorced from Tony David, Elizabeth had an affair with Peter Higgins all through 1950s into 1960s. She dedicated her book ‘French Provincial Cooking’ to him, but Higgins left her for a younger woman.
In 1963, Elizabeth suffered from cerebral hemorrhage because of the stress of her work and with the depression that she had incurred with the end of her affair with Higgins. She took to drinking and abusing prescribed drugs.
Elizabeth left her business of running the kitchen equipment shop in 1973 as her way of running the shop was unconventional and the other business partners did not comply with it anymore. The shop continued to trade under her name.
In 1992, she suffered from two fatal consecutive strokes and died at her Chelsea home at the age of 78. She was buried at the family church of St Peter’s, Folkington.
Trivia
Elizabeth married her husband Tony David because she was scared of being left alone, otherwise she used to enjoy the string of affairs that she had as a spinster.
The death of her younger sister in 1986 was a big blow to Elizabeth’s health as she lived in an apartment above her for the past 30 years and her death made her very lonely.
She owed her interest in cookery writing to the first cookery book that her mother gifted, ‘The Gentle Art of Cookery’ by Hilda Leyel.

See the events in life of Elizabeth David in Chronological Order 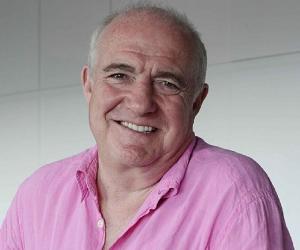 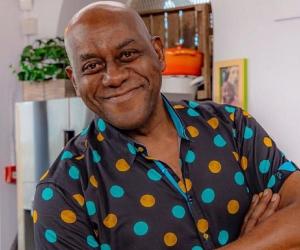