(One of the World's Greatest Authors)

Roald Dahl was a British novelist, poet, screenwriter, short-story writer, and wartime fighter pilot. He became a prominent author, penning amazing and humorous stories for children after his flourishing career in the ‘Royal Air Force’ ended due to head injuries. With his short stories being ranked among the world’s best-selling fiction books, he is often considered one of the greatest children’s storytellers of the 20th century. Such is the recognition and glory of his much-acclaimed best-selling books that they have been published in over 60 languages across the world. While his children’s stories were fast-moving, his adult fiction, on the other hand, gained recognition for its sudden twists and unexpected storylines. While imaginative plots were the highlights of his adult stories, children’s fiction usually consisted of word coinages, neologism, and puns, such as ‘Oompa Loompa,’ ‘Mugglewump,’ ‘Fleshlump eater,’ and Vermicious Knids.’ He dedicated his most-loved novel ‘The BFG’ to his eldest daughter Olivia. Many of his publications, such as ‘Matilda’ and ‘Charlie and the Chocolate Factory,’ have been made into successful films and musical stage plays. Even after his death, his works continue to inspire several budding authors and entertain children and adults alike around the globe. British Celebrities
Novelists
Children's Authors
Short Story Writers
British Men
Childhood & Early Life
Roald Dahl was born on September 13, 1916, in Llandaff, Cardiff, Wales, to Norwegian emigrants Harald Dahl and Sofie Magdalene Dahl.
After his eldest sister Astri’s death in 1920, his father passed away a few weeks later. Thereafter, his mother stayed back in Wales to get her kids educated at British schools as per Harald’s wish, instead of returning to Norway.
He went to ‘The Cathedral School,’ Llandaff, but due to his mischievous nature, his mother sent him to British-boarding ‘St. Peter’s Preparatory School,’ Weston-super-Mare in 1925.
In 1929, he shifted to ‘Repton School,’ Derbyshire where he showed more interest in sports, exceling in football, squash, and fives. He also showed interest in literature and photography. 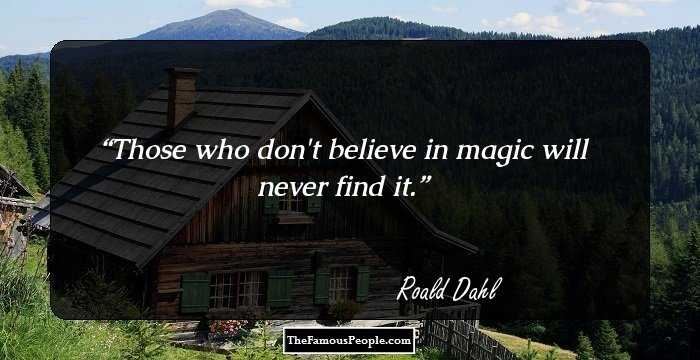 Quotes: Never, Will, Believe
Continue Reading Below
Career
After completing his schooling in 1934, he took up a job in ‘Shell Petroleum Company’ in Mombasa, Kenya, after two years of training in the UK. Subsequently, he was transferred to Dar es-Salaam, Tanzania.
To accomplish his adventurous dreams, he entered the ‘Royal Air Force’ in 1939 as an aircraftsman. Upon completing his training in Nairobi, Kenya, he became an acting pilot officer.
During his term in the Mediterranean in 1940, his plane crashed in Fouka, Libya, injuring his spine and skull, crushing his nose, and blinding him for days. He underwent hip replacement surgery and six spinal surgeries.
Following his treatment for months in the hospital, he was discharged in 1941 and resumed his flying duties in Athens, Greece. However, his recurring blinding headaches forced him to leave RAF and return to Britain.
In 1942, he went to Washington DC and became an assistant air attaché in the British Embassy. During his stay in Washington DC, he met novelist C.S. Forester and started his writing career with a short story for ‘The Saturday Evening Post.’
His first children’s picture book ‘The Gremlins’ was published in 1943, followed by a collection of his war stories ‘Over To You’ in 1946. His novel ‘Sometime Never’ was published in 1948.
Apart from writing marvelous stories for kids, he also became an established short-story writer for adults. His books, written for adults, were full of unexpected twists and dark humor.
He released his autobiographies ‘Boy: Tales of Childhood’ and ‘Going Solo’ in 1984 and 1986 respectively.
He turned down the Order of the British Empire (OBE) during the 1986 ‘New Year Honours.’ It was reported that he turned down the honor as he wanted a knighthood.
Continue Reading Below
In 2016, he was posthumously honored with BBC’s ‘Blue Peter Gold Badge,’ which was received by his daughter Lucy. 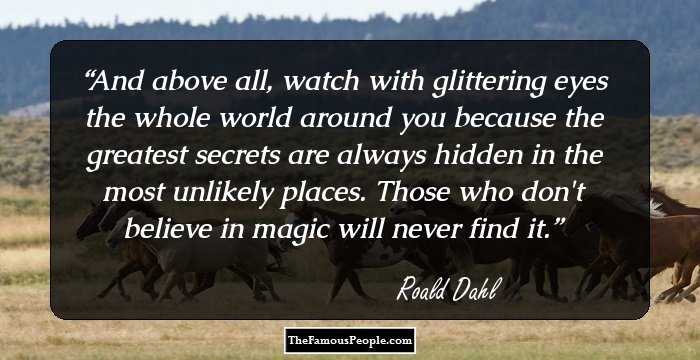 Quotes: You, Never, Will, Believe
Major Works
His second collection of short stories ‘Someone Like You,’ released in 1953, became a huge success.
In 1960, he developed a device called ‘Wade-Dahl-Till (WDT) valve’ which helped in treating thousands of children suffering from hydrocephalus. The device helped reduce the cranial pressure.
His fourth book ‘Kiss Kiss,’ a collection of short stories, released in 1960. It became a ‘New York Times’ bestseller. A short story titled ‘Pig’ became particularly popular.
Some of his best-selling children’s stories include ‘James and the Giant Peach,’ ‘The Twits,’ ‘Matilda,’ ‘The Witches,’ ‘George’s Marvellous Medicine,’ ‘Charlie and the Chocolate Factory,’ ‘The BFG,’ ‘The Magic Finger,’ and ‘Fantastic Mr. Fox.’
His highly acclaimed short story and novel collection for adults include ‘Tales of the Unexpected,’ ‘The Smoker,’ ‘My Uncle Oswald,’ ‘Roald Dahl’s Book of Ghost Stories,’ and ‘The Landlady.’
Awards & Achievements
His short stories—‘Someone Like You’ (1954), ‘The Landlady’ (1959), and ‘Tales of the Unexpected’ (1980)—won him three ‘Edgar Allan Poe Awards’ from the ‘Mystery Writers of America.’
In 1983, he received the ‘Whitbread Children’s Book Award’ for ‘The Witches.’ He also received the ‘World Fantasy Award’ for ‘Life Achievement.’
Continue Reading Below
‘The British Book Awards’ honored him with the ‘Children’s Author of the Year’ in 1990.
In 2008, he was ranked 16th on the list of ‘50 greatest British writers since 1945’ by ‘The Times.’ 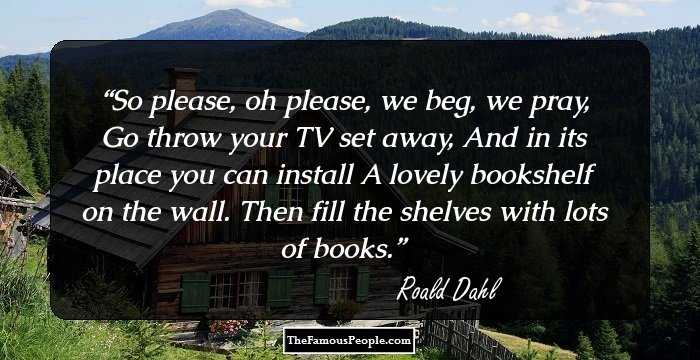 Quotes: You, Books
Personal Life & Legacy
He married Patricia Neal, an Oscar-winning Hollywood actress, in 1953 at ‘Trinity Church,’ New York City.
The couple had five children – daughter Olivia Twenty (1955), daughter Chantal Tessa (1957), son Theo Matthew (1960), daughter Ophelia Magdalena (1964), and daughter Lucy Neal (1965).
In 1960, his four-month old son Theo was severely injured when a taxi hit his baby carriage, leaving him with a brain injury called hydrocephalus. He recovered after undergoing a number of surgeries.
In 1962, his eldest daughter Olivia died due to measles encephalitis. He later wrote an open letter ‘Measles: A Dangerous Illness,’ requesting parents to get their kids vaccinated.
Patricia suffered three near-fatal strokes in 1965. He stood by her during her rehabilitation and helped her recover completely.
Roald and Patricia divorced in 1983. Soon after, he married Felicity ‘Liccy’ Crosland at Brixton Town Hall, South London.
Continue Reading Below
He died on November 23, 1990, at Oxford, England after suffering from myelodysplastic syndrome, a type of blood disease.
He was given a Viking funeral. His mortal remains were buried at St. Peter and St. Paul’s Church in Great Missenden, Buckinghamshire. His body was buried along with his snooker cues, chocolates, power saw, some good burgundy, and HB pencils.
Some of his culinary delights—‘Bird Pie,’ ‘Hot Frogs,’ and ‘Lickable Wallpaper’— were included in ‘Roald Dahl’s Revolting Recipes’ (1994) by his widow Felicity.
The Oval Basin plaza, a modern landmark of Cardiff Bay, was renamed ‘Roald Dahl Plass’ in 2002. ‘Plass’ signifies ‘place’ or ‘square’ in Norwegian language.
In 2005, Cherie Blair, wife of former UK Prime Minister Tony Blair, inaugurated ‘Roald Dahl Museum and Story Centre’ in his hometown, Great Missenden.
In 2008, author Michael Rosen launched the ‘Roald Dahl Funny Prize,’ in association with ‘BookTrust,’ as initiative to honor writers promoting humor and laughter through children’s fiction.
Africa, UK, and Latin America celebrate September 13, his birth anniversary, as ‘Roald Dahl Day.’
In 2010, ‘Gibraltar Post’ released a set of four stamps featuring four of Dahl’s books, while a set of six stamps was issued by ‘Royal Mail’ in 2012.
Trivia
This children’s book author used to write with a pencil on yellow paper.
He was fluent in three languages – English, Swahili, and Norwegian.
He maintained a diary since the age of eight.
Recommended Lists:
Children's Authors #1
Writers #4

See the events in life of Roald Dahl in Chronological Order