Danish author Hans Christian Andersen is one of the few writers whose work spans the two distinct literary periods, ‘Romanticism’ and ‘Realism’. His work admired all around the world has been translated into 125 languages. During his lifetime, he was experienced extreme poverty and obscurity, as well as great wealth and fame. It was, in part, the unique, multi-dimensional perspective he acquired as the result of these varied experiences that destined his work to become classics. Hans Christian Andersen’s writing career was a diverse one. In addition to the fairy tales for which he is well- known, Andersen also wrote poetry, plays, novels, biographies, satires and travelogues. His travels funded by King Frederick VI, provided him inspiration, as well as allowed him to serve as a goodwill ambassador. Sensitive to criticism, some of his humorous satirical pieces were directed at critics. The profound social influence of his work can still be seen today. His stories, containing timeless truths about the human condition, continue to be adapted for the modern stage and screen. His own personal story is one of overcoming great loss, poverty and adversity and going on to earn not only literary success, but the love and respect of his countrymen, both rich and poor alike Danish People
Danish Men
Aries Writers
Male Writers
Danish Writers
Childhood & Early Life
Born to Hans Andersen, a shoemaker, and Anne Marie Andersdatter, a washerwoman, young Hans was introduced to literature by his father, who often read to Hans before his death in 1816. Due to his mother’s subsequent poverty, at the tender age of 11, Hans was sent to a school for poor children where he worked as a tailor’s apprentice and in a tobacco factory, to support himself.
At age 14, desperately unhappy with the circumstances, he convinced his mother to allow him to move to Copenhagen to seek work as an actor. He found a position at the ‘Royal Danish Theater’, where he met his future patron, Jonas Collin.
With a grant from King Frederick VI, Andersen was able to attend schools in Slagelse and Elsinore, where he completed his education in 1827. He described his years there as the most difficult phase of his life. 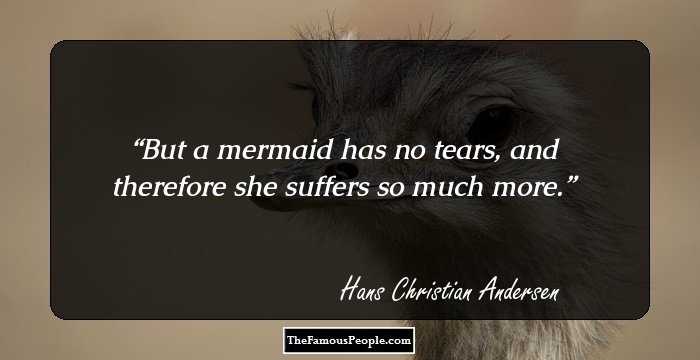 Continue Reading Below
Career
His first short story, ‘The Ghost at Palnatoke's Grave’, was published in 1822. Thereafter, he published a variety of works every year until his death. More of his works continued to be published posthumously.
In 1835, his focus shifted away from poetry and he began writing more travelogues and fairy tales including several that have gone on to become modern classics, including ‘Thumbelina’, ‘The Princess and the Pea’ and ‘The Tinder Box’. His first novel, a highly acclaimed autobiographical account of his travels to Italy titled ‘The Improvisatore’ was also published this year.
1836 was one of his most prolific years in which he produced works in nearly every literary category, including his first romance novel, titled ‘O.T.’, which enjoyed considerable success.
In 1837 a compilation of his fairy tales was published which included ‘The Emperor’s New Clothes’. His second novel, ‘Only A Fiddler’ was also published this year which was reviewed by Soren Kierkegaard.
The huge success of four different translations of a compilation of his fairy tales in 1845 inspired him to continue writing fairy tales and publishing them in installments. Compilation of these stories was later published in two volumes, the second of which included his fairy tale ‘The Little Mermaid’.
Hans Christian Andersen’s final story, ‘What Old Johanne Told’ was published in 1872. However, one of his first stories written when he was still a student titled ‘The Tallow Candle’ was discovered in an archive forty years later.
Throughout his illustrious writing career from 1822 to 1874, he produced 212 fairy tales, 6 novels, 51 plays, 1024 poems and 25 travelogues. His work has influenced many writers such as A.A. Milne and Beatrix Potter. 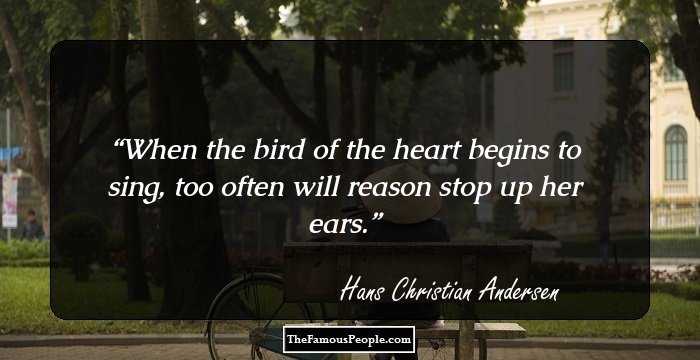 Quotes: Will, Heart
Major Works
‘The Little Mermaid’ was first published in Copenhagen by C.A. Reitzel in 1837. The story has been adapted into operas, plays, ballets, television series and movies. Perhaps the most famous adaptation was Disney’s animated version. Worldwide, it grossed $222,300,000 in theaters and an additional $288,819,874 in home video sales.
Continue Reading Below
‘The Snow Queen’, published in December of 1844 is one of his most critically acclaimed stories. The first movie adaptation of the story was a Soviet version released thirteen years later. The popular Disney movie ‘Frozen’ was originally meant to be an adaptation of ‘The Snow Queen’.
‘The Emperor’s New Clothes’, first published in 1837 has been translated into more than a hundred languages. Adaptations of the story include a film and a musical play by the ‘Chicago Shakespeare Theater’.
Awards & Achievements
He was declared a national treasure for his contributions to literature, for which he received an annual artist’s stipend from the Danish government.
In 2000, he was inducted into the ‘Hall of Fame’ created by the ‘Prometheus Awards’ society for his famous creation ‘The Emperor’s New Clothes’. 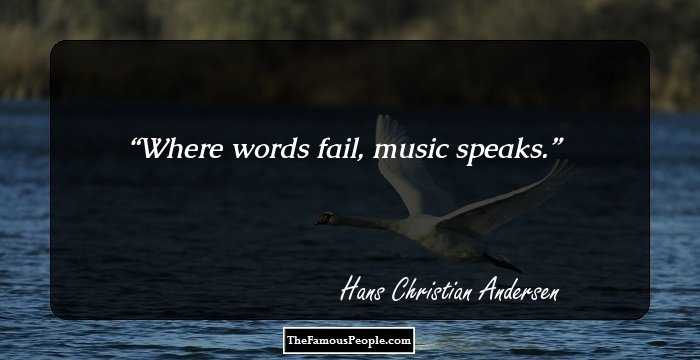 Quotes: Music
Personal Life & Legacy
Hans Christian Andersen had several love interests throughout his lifetime, which included men as well as women. However, none of them reciprocated his feelings. His female love interests included Riborg Voigt, Sophie Orsted, Louise Collin and Jenny Lind. Men towards whom he felt a great affection included Edvard Collin, Harald Scharff and Carl Alexander.
Andersen's health never fully recovered from a fall he suffered in 1872. He was diagnosed with liver cancer soon afterwards and died battling the disease, three years later. His funeral at 'Assistens Kirkegard', Copenhagen, was attended by his friends. August Saabye sculpted a statue of Andersen, which is erected in the Rosenborg Castle Gardens, Copenhagen.
Although he left no heirs, his legacy includes much more than just the statues and museums erected in his honor throughout the world. The annual ‘Hans Christian Andersen Award’ for lasting contributions to children’s literature is a testament to the continued social and political relevance of his work.
Trivia
The famous author was the first to make his work available to the uneducated working classes by performing live readings for the ‘Worker’s Association’. To show their appreciation, they provided an honor guard at his funeral.