E. B. White was an American author. He was better known as the writer of popular children’s books like ‘Stuart Little’, ‘The Trumpet of the Swan’ and ‘Charlotte’s Web’. After declining the offer of a teaching position at the University of Minnesota, he worked for the United Press. He also served as a reporter for “Seattle Times” for one year. After working in an advertisement agency, he joined “New Yorker” magazine as contributing editor. Here, he met his future life partner Katharine Angell, the literary editor of that magazine. He published several collections of poems but came into limelight for his “Stuart Little”, a popular children’s book. His books like “Charlotte’s Web” and “The Trumpet of the Swan” drew the attention of children for their unique story lines. “Stuart Little” is about a tiny talking mouse born in a human family, whereas “Charlotte’s Web” depicts friendly relationship between a spider and a pig. This book conveys the message to its readers that death is an inevitable part of life. His book “The Trumpet of the Swan” is a funny story about a male swan and a female swan. All these three books were later adapted into films. Quotes By E. B. White Poets

American Celebrities
Essayists
Novelists
Journalists
Children's Authors
Childhood & Early Life
Born in Mount Vernon, New York, U.S., Elwyn Brooks White was the youngest of six children of Samuel Tilly White, a piano manufacturer, and Jessie Hart White. He received his early education at local public schools in Mount Vernon.
Later, he attended Cornell University where he was the editor of “The Cornell Daily Sun”. He graduated with a Bachelor of Arts degree from this university in 1921. 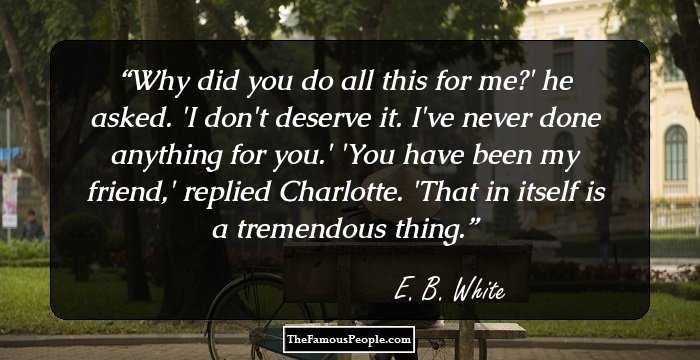 Who Is The Most Popular BTS Member?
Career
From 1921 to 1922, he worked for the United Press International and the American Legion News Service. After leaving this job, he worked as a reporter for the “Seattle Times” from 1922 to 1923.
Next, he worked as a production assistant and copy writer for the Frank Seaman advertising agency. At the same time, he used to publish his poems in “The Conning Tower”.
After the publication of his articles titled “Defense of the Bronx River” in “New Yorker” magazine in 1925, he got noticed for his literary abilities.
In 1927, he joined “New Yorker” as its contributing editor. He wrote a number of essays, poems and other pieces for this periodical. Together with fellow writer James Thurber, he played a crucial role in the improvement of this publication.
His poetry collection “The Lady Is Cold” appeared in 1929. Later, together with writer James Thurber, he authored “Is Sex Necessary? Or, Why You Feel the Way You Do”, a collection of prose.
In 1930, he shifted to a farm in Maine, New England, USA with his family.
In 1931, he published “Ho Hum: Newsbreaks from the New Yorker”. In the following year, his book “Another Ho Hum: More Newsbreaks from the New Yorker” appeared.
In 1934, he published “Every Day Is Saturday”. Later, in 1936, the “New Yorker” published one of his essays “Farewell My Lovely!” under the pseudonym Lee Strout. This piece of writing secured him a place in the country’s literary circles.
He published his poetry collection “The Fox of Peapack” in 1938. In the same year, he started writing a monthly column titled “One Man’s Meat” in “Harper’s Magazine”. He wrote this column for the next five years.
Continue Reading Below
Encouraged by his niece, he started writing children’s books. His first children’s book “Stuart Little” appeared in 1945. This is a story of a little mouse whose parents are human beings.
His novel “Charlotte’s Web” appeared in 1952. This book unfolds the story of friendship between a pig and a spider.
In 1954, his book “The Second Tree from the Corner” appeared. In 1959, he published “The Elements of Style”, a guide book about American English writing style. In 1962, he published “The Points of My Compass”. In 1970, he published another children’s book titled “The Trumpet of the Swan” that tells the story of male swan born without a voice. 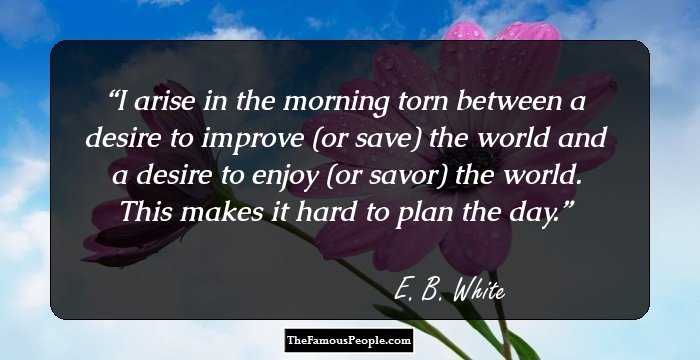 Quotes: I
Major Works
Published in 1945, his novel “Stuart Little” earned him instant fame as the writer of a classic book for children.
His short book “Here Is New York” appeared in 1949. This book provides detailed description of the city of New York. Through this book, he praises the loneliness and privacy that this city offers to its residents.
His book “Charlotte’s Web” was published in 1952. This novel presents an interesting story of Wilbur, a pig and Charlotte, a spider. This book is notable for its usage of rhythm in its content
“The Trumpet of the Swan”, his third children’s book appeared in 1970. This book unfolds the story of a male swan and his effort to play a trumpet to impress a female swan.
Awards & Achievements
In 1970, he won the Laura Ingalls Wilder Medal for his long lasting contribution in the arena of children’s literature by authoring books like “Stuart Little” and “Charlotte’s Web”. 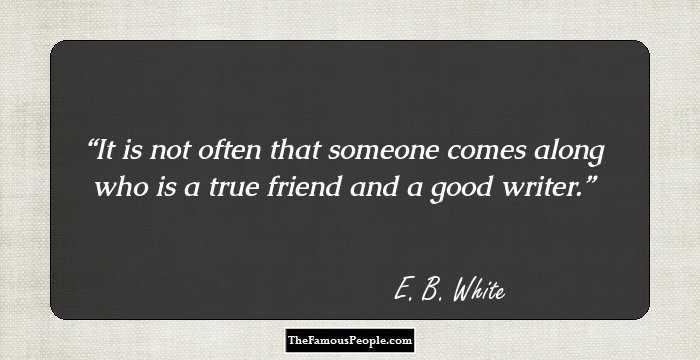 Personal Life & Legacy
He married Katharine Angell, the literary editor of “The New Yorker” in 1929. They had a son, Joel White.
Elwyn Brooks White breathed his last at the age of 86 at his home in North Brooklin, Maine.
Trivia
This prominent writer of American origin dreamt about a tiny boy who resembled like a mouse. This dream inspired him to create the famous “Stuart Little”, a story about a little talking mouse.
After observing the weaving work of a big grey spider, this author of popular children’s novel became so much impressed that he thought about incorporating the character of this spider into his novel “Charlotte’s Web”.
Recommended Lists:
Essayists #84
Children's Authors #59
Writers #1376
Media Personalities #1371
You May Like

See the events in life of E. B. White in Chronological Order